U.S. and Chinese defense chiefs on Friday traded barbs over the situation surrounding self-ruled democratic Taiwan on the fringes of a key security meeting in Asia, with both sides warning against actions that they view as destabilizing. 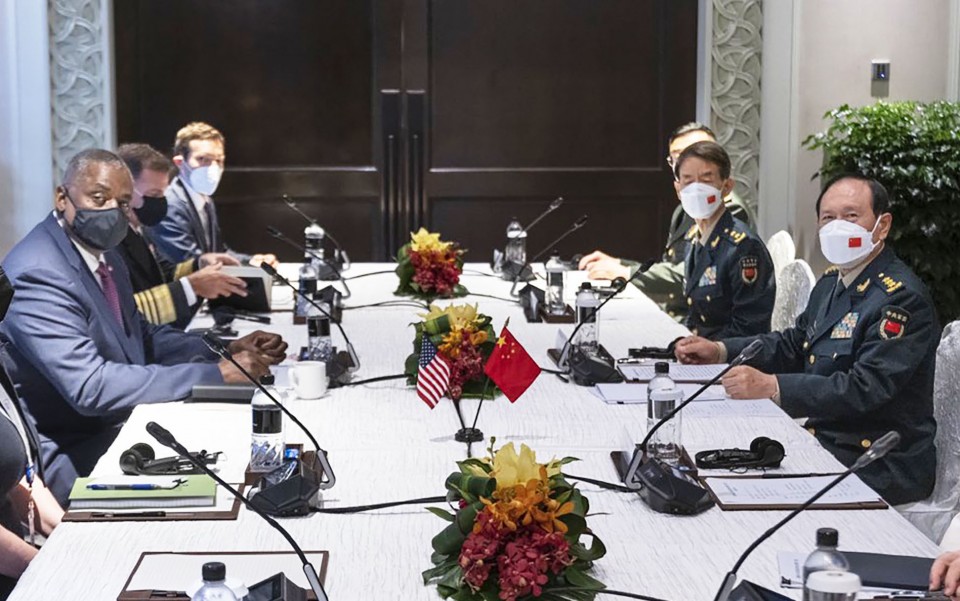 Austin emphasized the importance of peace and stability across the Taiwan Strait, expressed opposition to unilateral changes to the status quo and called on China to "refrain from further destabilizing actions toward Taiwan," according to the Pentagon.

He also reiterated that the United States remains committed to its longstanding "one-China" policy, under which Washington recognizes Beijing as the "sole legal government of China."

Wei and Austin met on the sidelines of the Asia Security Summit in Singapore, known as the Shangri-La Dialogue, as Washington has been stepping up efforts to counter Beijing's increasing assertiveness in the Indo-Pacific region.

Amid growing rivalry between the two countries, Austin discussed the need to "responsibly manage competition and maintain open lines of communication" and underscored the importance of the Chinese People's Liberation Army engaging in "substantive dialogue on improving crisis communications and reducing strategic risk," according to the Pentagon.

After meeting with Austin, Wei said at a press conference that the United States is violating the one-China policy, criticizing Washington as hurting Beijing's interests.

Biden last month expressed his commitment to defending Taiwan if Communist-led China attempts to seize the island by force.

China has voiced firm opposition to Biden's remarks, as the leadership of President Xi Jinping regards Taiwan as a renegade province to be reunified with the mainland, by force if necessary.

In late May, China's military carried out a "combined combat-readiness patrol" in the waters and airspace around Taiwan as a warning against what Beijing sees as collusion between Washington and Taipei.

China and Taiwan have been governed separately since they split in 1949 due to a civil war.

Earlier this year, meanwhile, China and the Solomon Islands in the South Pacific signed a security pact that would allow the deployment of the Chinese military and other armed personnel, as well as the docking of its warships in the islands.

The Biden administration has warned the Solomon Islands against any possible moves toward inviting a Chinese military presence, while Australia tried to prevent the island nation from formally signing the pact with Beijing.

In April, the Chinese and U.S. defense chiefs held phone talks, marking the first known communication between them since Austin became the defense secretary last year.

According to the Pentagon, Austin and Wei also discussed Friday global and regional security issues, including North Korea, which has been test-firing ballistic missiles at a rapid pace, as well as Russia's invasion of Ukraine.

The United States has been concerned that China may step in to support Russia in its war efforts. A Chinese defense ministry spokesman denied Friday that Beijing has provided any military support to Moscow.