WASHINGTON - The Supreme Court ruled to eliminate the constitutional right to abortion Friday, overturning a landmark 1973 decision in a highly divisive move that could become a key issue in the November midterm elections.
"The Constitution does not confer a right to abortion," Justice Samuel Alito wrote in the 6-3 ruling on a case regarding the constitutionality of a Mississippi law that bans abortion after 15 weeks of pregnancy. "The authority to regulate abortion is returned to the people and their elected representatives."
The top court ruling means U.S. states can decide on abortion regulations, likely leading to abortion bans in roughly half of them, according to The Associated Press. 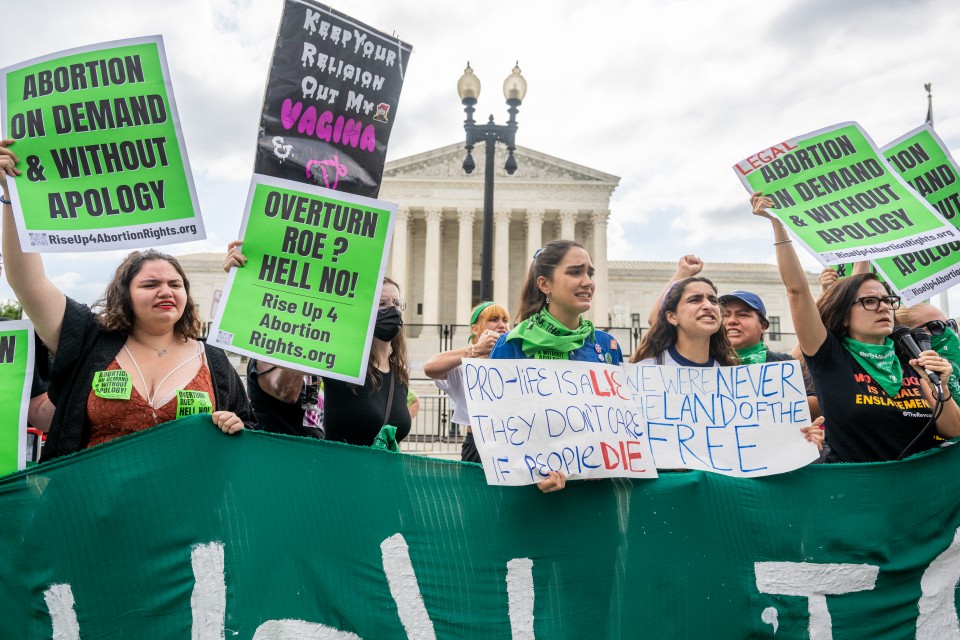 Abortion rights activists in Washington on June 24, 2022, react to a U.S. Supreme Court ruling overturning a landmark 50-year-old decision that guaranteed a federal right to an abortion. (Getty/Kyodo)
"It's a sad day for the court and for the country," President Joe Biden said just hours after the ruling was issued by the nine-member court, which has six conservative justices.
"With this decision, the conservative majority of the Supreme court shows how extreme it is, how far removed they are from the majority of this country. They have made the United States an outlier among developed nations in the world," the Democratic president said.
Under Biden's predecessor Donald Trump, a Republican, three conservative judges made their way to the Supreme Court, including one who filled a vacancy created in 2020 by the death of Justice Ruth Bader Ginsburg, a liberal icon.
Biden emphasized that the 1973 decision, known as Roe v. Wade, had protected a woman's right to make personal decisions with their doctors, free from political interference, and gave women the power to control their own destinies.
"Now with Roe gone, let's be very clear. The health and life of women in this nation are now at risk," he said, warning that state laws banning abortion would automatically take effect and some steps could even force women to bear a child as a consequence of incest or rape.
The president called on voters to cast their ballots in the upcoming elections to send lawmakers to Congress who will seek to codify abortion rights in federal law. Biden's popularity has been sluggish and his Democratic Party's electoral prospects have been bleak.
"This fall, Roe is on the ballot. Personal freedoms are on the ballot. The right to privacy, liberty, equality -- they're all on the ballot," he said, "Until then, I will do all in my power to protect a woman's right in states where they will face the consequences of today's decision."
According to a study by the Pew Research Center released in May, around 60 percent of Americans said abortion should be legal in all or most cases. But their views also seemed to be largely dependent on the circumstances, such as how early or late in pregnancy an abortion takes place and whether the pregnancy endangers a woman's life.