Japan will not join the first meeting of parties to a U.N. treaty banning nuclear weapons to be held in Vienna next week, Prime Minister Fumio Kishida said Wednesday, despite high expectations for its attendance as the only nation that has suffered atomic bombings.

Japan, which has not signed the Treaty on the Prohibition of Nuclear Weapons, did not complete the procedures for taking part in the three-day meeting, including as an observer, by the Tuesday deadline.

Survivors of the U.S. atomic bombings of Hiroshima and Nagasaki in August 1945, as well as member nations of the U.N. treaty, had hoped that the Japanese government would participate in the gathering that kicks off next Tuesday. 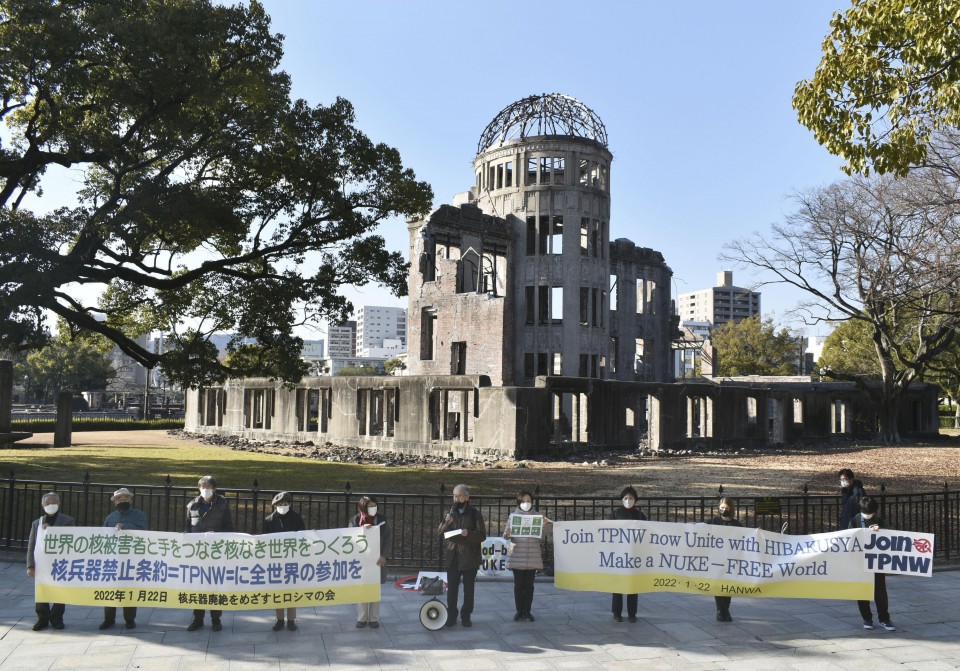 People gather in front of the Atomic Bomb Dome in Hiroshima on Jan. 22, 2022, the first anniversary since the Treaty on the Prohibition of Nuclear Weapons entered into force, calling for early ratification of it by Japan, the only country that has suffered the devastation of atomic bombings. (Kyodo) ==Kyodo

Kishida said he recognizes the treaty as "very important" for abolishing nuclear weapons but noted that no nuclear weapon state is a signatory.

"To begin with, Japan should buckle down on nuclear disarmament and nonproliferation in realistic ways under the trust relationship with the United States, which is the sole ally (of Japan)," Kishida told a press conference organized after this year's 150-day ordinary parliamentary session concluded.

The treaty is the first international pact outlawing the development, testing, possession and use of nuclear weapons, taking effect in January last year.

But the United States and other nuclear-armed nations are not part of it, and Japan has stood aligned with them as it has a long-standing security alliance with Washington that offers the shelter of its nuclear umbrella.

Meanwhile, other non-signatory countries such as Germany and Norway have decided to join the meeting as observers, although their national defense depends on the U.S.-led nuclear umbrella as member states of the North Atlantic Treaty Organization.

The conference comes amid growing fears over Russia's possible use of nuclear weapons during its invasion of Ukraine and signs that North Korea may be preparing for its first nuclear test since 2017.

At the gathering, participants are expected to draw up an action plan to chart a course for nuclear abolition and the salvation of "hibakusha," people who have been physically affected by nuclear radiation, in addition to a statement that will urge nuclear weapon nations to reduce their arms.

As for the Conference on the Humanitarian Impact of Nuclear Weapons, scheduled for Monday in the Austrian capital, Kishida has said Japan will send a delegation.

Meanwhile, Kishida, elected from a constituency in Hiroshima, has been considering delivering a speech at a review conference of the Treaty on the Non-Proliferation of Nuclear Weapons to be held in New York in August, according to a government source. If realized, he will become the first Japanese premier to attend the conference.