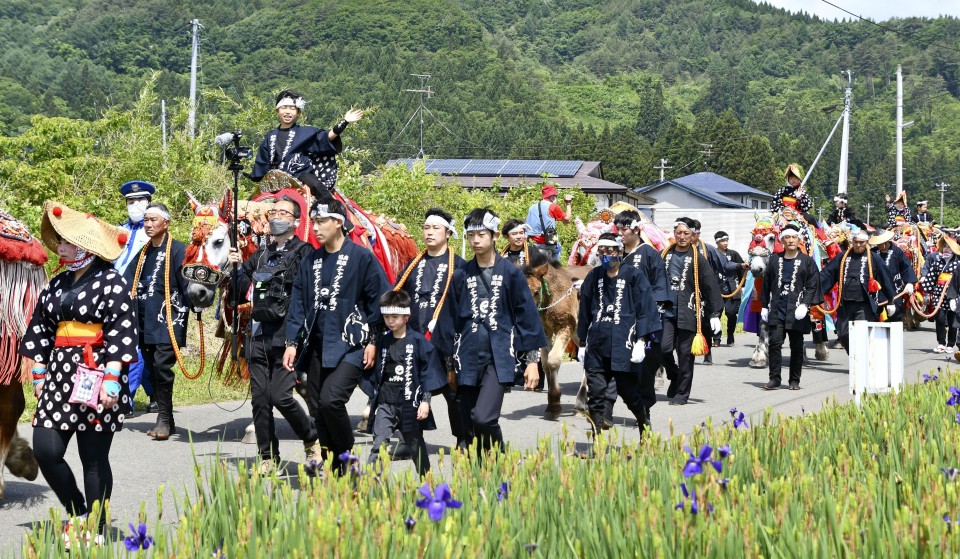 Photo taken on June 11, 2022, in Takizawa, Iwate Prefecture, northeastern Japan, shows the "Chagu Chagu Umakko" parade of colorfully clad framing horses and children, designated as an intangible folklore cultural asset of the nation. The parade of some 14 kilometers from Takizawa to nearby Morioka city resumed following a two-year hiatus due to the COVID-19 pandemic. (Kyodo) ==Kyodo

SINGAPORE - Defense Minister Nobuo Kishi conveyed to his Chinese counterpart on Sunday concern over a recent joint flight by Chinese and Russian bombers near Japan as a "show of force" against his nation.

Kishi told reporters after a meeting with Defense Minister Wei Fenghe in Singapore that he called for China's "self-restraint" in the East China and South China seas, airing strong concern over Beijing's ongoing "unilateral attempts to alter the status quo by force."

FUKUSHIMA, Japan - Residents from part of Katsurao village in Fukushima Prefecture can move back into their homes again more than a decade on from the March 2011 nuclear disaster, after evacuation orders were lifted Sunday morning.

It is the first time restrictions have been removed to allow residents to live again in part of the "difficult-to-return" zone once expected to stay closed far into the future due to high radiation exposure.

TOKYO - Wind energy infrastructure being installed across Japan was found interfering with Self-Defense Forces radars for detecting missiles, prompting the Defense Ministry to call for changes in some projects, multiple sources related to the matter said Saturday.

In some instances, the ministry also called for such infrastructure not to be installed in areas that had been singled out by the government as favorable locations for offshore wind power generation, the sources said.

SINGAPORE - Defense chiefs from Japan, the United States and South Korea agreed in Singapore on Saturday to resume joint drills to deal with North Korea's ballistic missiles following its repeated launches since the start of this year.

Japanese Defense Minister Nobuo Kishi, U.S. Defense Secretary Lloyd Austin and South Korean Defense Minister Lee Jong Sup, in a statement issued after their talks, also highlighted the importance of "peace and stability" in the Taiwan Strait, across which China has been exerting military pressure.

SINGAPORE - Japan and Singapore will start negotiations to reach a deal on the transfer of defense equipment and technology, Prime Minister Fumio Kishida said Saturday, setting the stage for more security cooperation in a region facing challenges by an assertive China.

During a summit meeting, Kishida and Singapore counterpart Lee Hsien Loong agreed on the launch and jointly defend the rules-based order after Russia's invasion of Ukraine sent ripples to the Indo-Pacific region.

NAHA, Japan - Okinawa Gov. Denny Tamaki on Saturday announced his bid for a second four-year term, likely facing a challenger backed by the Liberal Democratic Party in the Sept. 11 election.

Tamaki made clear at a news conference his continued opposition to the controversial relocation of a U.S. Marine Corps base within the prefecture, saying construction of a new airfield off the eastern coast is "absolutely unacceptable."