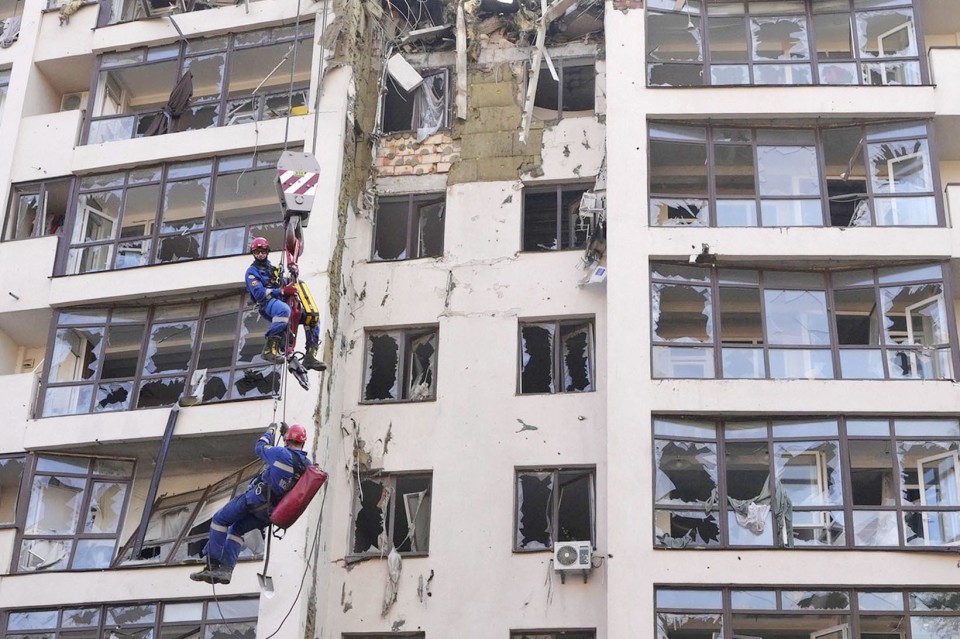 Photo taken in the Ukrainian capital of Kyiv on June 26, 2022, shows rescue operation under way at a condominium partially destroyed by Russia's missile attacks. (Kyodo) ==Kyodo

MUNICH - Group of Seven leaders vowed Monday to give financial, humanitarian and other forms of support to Ukraine "as long as it takes," and strongly condemned Russia's continued illegal aggression.

The G-7 leaders said in a statement they will coordinate efforts to provide military and defense equipment to meet Ukraine's urgent needs, adding that they do not recognize Russia's attempts to redraw borders by force.

MUNICH - The leaders of the Group of Seven industrialized countries are in final talks on seeking a global price cap on Russian oil in its latest move to pressure Moscow over its war in Ukraine while planning to roll out more steps to support Kyiv, such as by using revenues from tariffs imposed on Russian products, a U.S. official said Monday.

As the war enters its fifth month and drives up energy and food prices around the world, Ukrainian President Volodymyr Zelenskyy is set to renew calls for help during a virtual address to the G-7 leaders in the spa resort of Schloss Elmau in Germany on the second day of their summit through Tuesday.

TOKYO - The government called on households and businesses in Tokyo and surrounding areas to reduce their electricity usage on Monday, and will ask the same for Tuesday, due to heightened demand as Japan braces for a lengthy and hot summer after an early end to the rainy season.

The industry ministry issued its first-ever power supply advisory a day earlier urging people in Tokyo Electric Power Company Holdings Inc.'s service area to take energy-saving steps between 3 p.m. and 6 p.m. Monday, such as turning off lights that are not in use.

TOKYO - The rainy season in Tokyo and neighboring areas in the Kanto-Koshin region in eastern and central Japan appears to have ended, the Japan Meteorological Agency said Monday, the earliest finish to the period since data became available in 1951.

The rainy season has also been declared over for the Tokai region in central Japan and southern Kyushu, the agency said, the second earliest end to the wet season for those areas.

TOKYO - A new private financial exchange, hoping to be an alternative for the Tokyo Stock Exchange, opened Monday in Japan, becoming the third such exchange and the first to be launched in 12 years in the country, the operator said.

The Osaka Digital Exchange or ODX offers trading of stocks and exchange-traded funds from 8:20 a.m. to 4 p.m. on weekdays, longer than the TSE's trading hours o 9 a.m. to 3 p.m., with a plan to introduce next year blockchain, an advanced technology for preventing data hacking.

TOKYO - More than a month has passed since the Japanese government relaxed its guidance on mask usage to reflect subsiding fears of the coronavirus, yet its call for removing masks whenever possible has not caught on widely among the public.

There has never been a mask mandate in the country, but more than two years of the pandemic has made mask-wearing the polite thing to do, even as heat-related illnesses are emerging as a concern as Japan readies for a boiling summer.

MUNICH - Japanese Prime Minister Fumio Kishida and German Chancellor Olaf Scholz agreed Sunday to step up cooperation related to a Group of Seven summit to be hosted in Hiroshima next year when Japan holds the forum's presidency.

Kishida and Scholz confirmed they will seek to deepen defense cooperation between Japan and Germany and make arrangements for the launch of their defense and foreign ministers' meeting under the so-called two-plus-two format, the Japanese Foreign Ministry said.

BETHESDA, Maryland - Japan's Nasa Hataoka shot a final-round, 3-under-par 69 on Sunday to finish fifth at the Women's PGA Championship, the third major of the year, four shots behind winner Chun In Gee of South Korea.

Starting the day in 35th, Hataoka carded four birdies and a bogey at Congressional Country Club for a 1-under total of 287. Minjee Lee of Australia and Lexi Thompson of the United States placed in a tie for second, both a shot behind Chun.