Japan stumbled to a 3-0 defeat against fellow World Cup qualifiers Tunisia in the final of the Kirin Cup on Tuesday, bringing a disappointing end to a run of four games over 13 days.

Japan, 23rd in the FIFA rankings, wasted several first-half chances before conceding twice from defensive errors by captain Maya Yoshida against the 35th-ranked North Africans in front of 31,292 at a rainy Panasonic Stadium in Osaka.

It was Tunisia's first win against Japan, who had won all four previous meetings, including in the 2002 World Cup group stage exactly 20 years ago in Osaka, when the Samurai Blue secured their first knockout-stage berth with a 2-0 result. 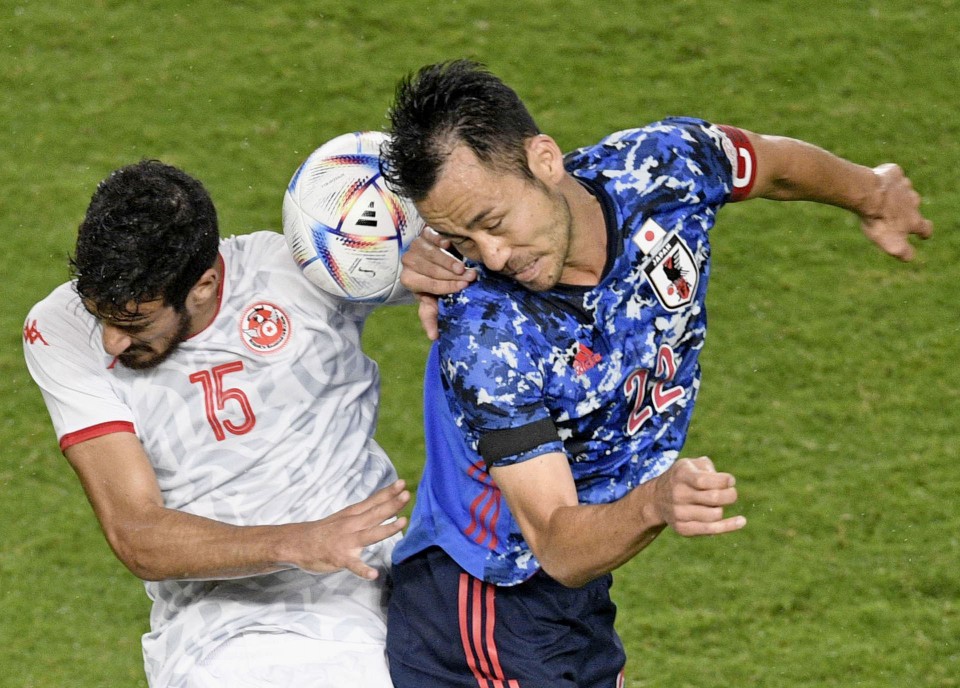 Maya Yoshida (R) of Japan vies for the ball during the second half of an international friendly against Tunisia at Panasonic Stadium in Suita, Osaka Prefecture, on June 14, 2022. (Kyodo) ==Kyodo

Hajime Moriyasu's side had beaten Ghana 4-1 on Friday to reach the final of the four-team tournament after beginning the month with a 4-1 win over Paraguay and a 1-0 loss to Brazil in friendlies.

"We wanted to come away with a trophy. It's a disappointing result," Moriyasu said. "Their finishing was clinical and that swung the game their way."

"Tunisia were a very good team and they had the ability to turn our weakness and mistakes into chances. It was a good lesson for us ahead of the World Cup finals."

Tunisia, who advanced with a 2-0 win over Chile, started on the front foot against Japan, with Ferjani Sassi sending his glancing header just over the bar following a cross from the left in the fourth minute. 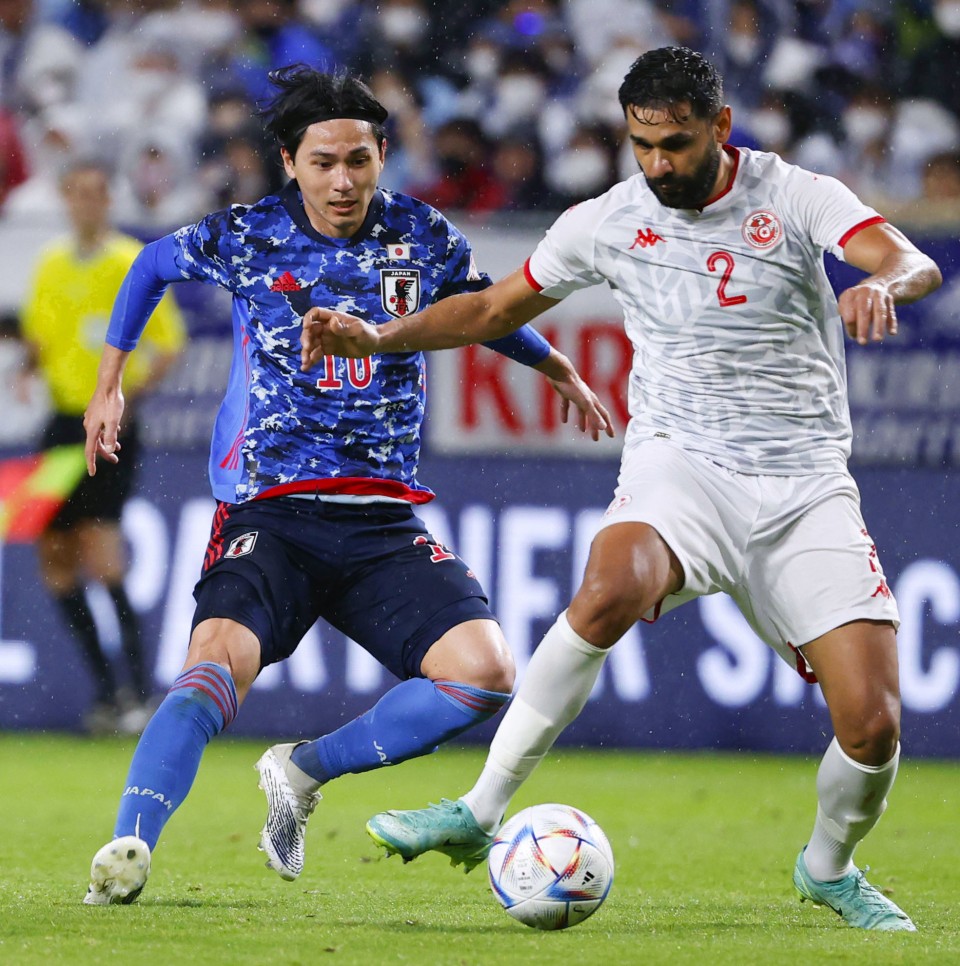 Takumi Minamino (L) of Japan and Bilel Ifa of Tunisia vie for the ball during the first half of an international friendly at Panasonic Stadium in Suita, Osaka Prefecture, on June 14, 2022. (Kyodo) ==Kyodo

Takumi Minamino made inroads down the left for the hosts but with no clear shots on goal following, while the visitors' press led to nervy moments for Japan after Yuto Nagatomo and Wataru Endo were both caught in possession in dangerous areas.

Japan's first chance went begging in the 28th minute when Liverpool attacker Minamino failed to make clear contact with a loose ball that fell his way from a free-kick.

Junya Ito came to life past the half-hour mark, drawing a foul deep down the right and moments later sending a perfect cross to the far post, only for an unmarked Daichi Kamada to scuff his shot at an open goal from meters out.

Aissa Laidouni shot tamely at Japan keeper Daniel Schmidt from a Tunisian corner before Minamino showed superb control three minutes from halftime, when he corralled Ko Itakura's long ball and finished, only for the goal to be wiped out for offside.

Ao Tanaka came on for Genki Haraguchi in the midfield as Japan made a strong start to the second half before Yoshida gave away a reckless penalty on a Tunisian attack down the right, sliding in from behind and conceding a spot kick converted by Mohamed Ali Ben Romdhane. 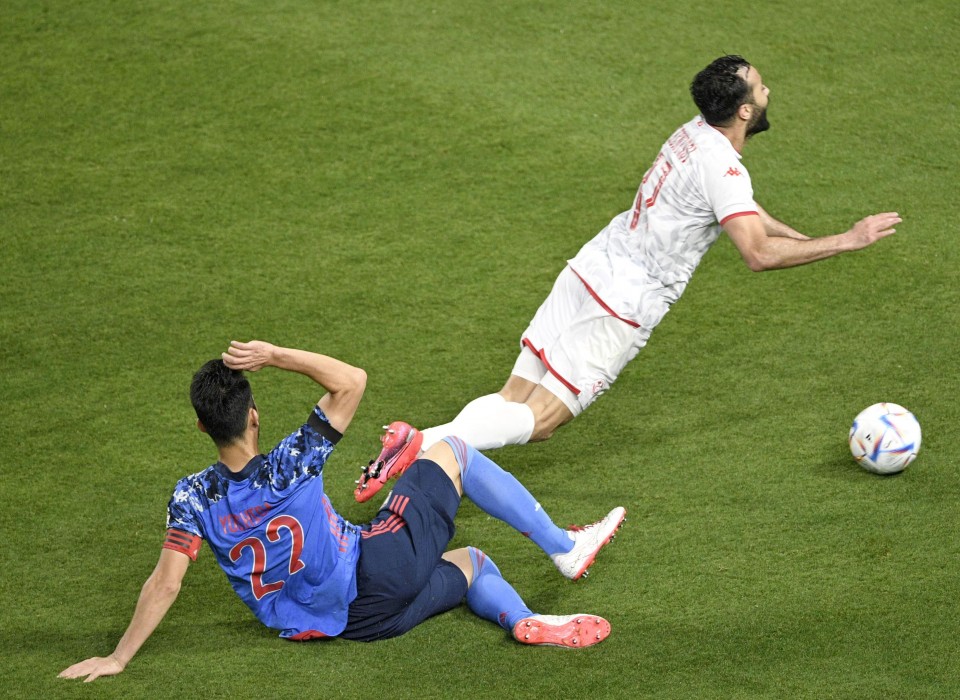 Japan's Maya Yoshida (L) brings down Taha Yassine Khenissi of Tunisia to concede a penalty during the second half of an international friendly at Panasonic Stadium in Suita, Osaka Prefecture on June 14, 2022. Tunisia won the game 3-0. (Kyodo) 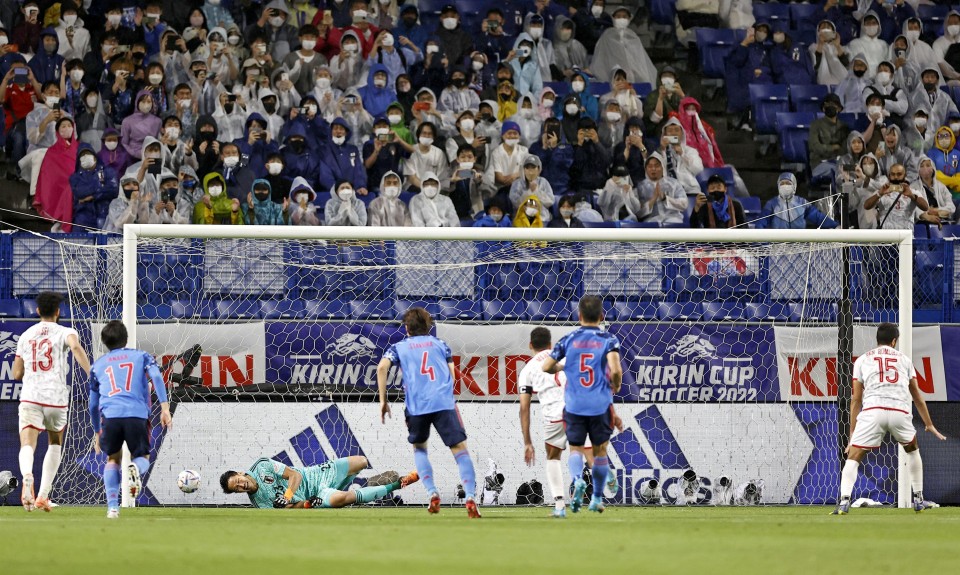 Mohamed Ali Ben Romdhane (15) of Tunisia converts a penalty in the second half of the team's 3-0 win over Japan in an international friendly at Panasonic Stadium in Suita, Osaka Prefecture on June 14, 2022. (Kyodo) 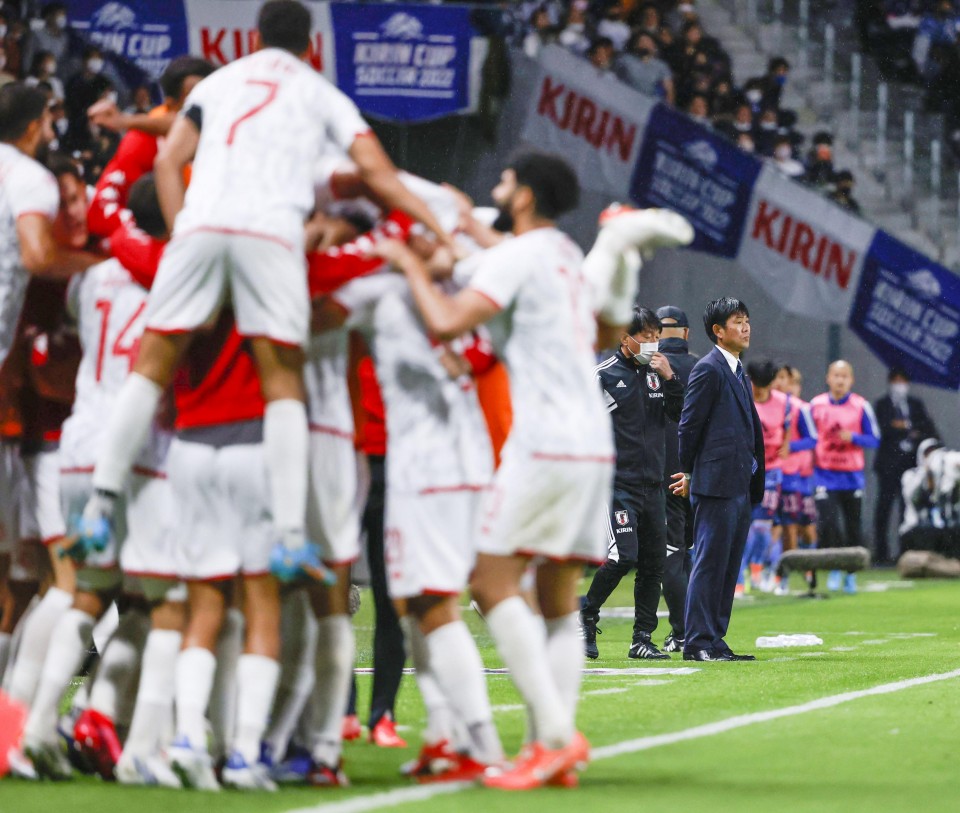 Japan manager Hajime Moriyasu (R) looks on as Tunisia's players celebrate the opening goal of their 3-0 win over Japan in an international friendly at Panasonic Stadium in Suita, Osaka Prefecture on June 14, 2022. (Kyodo)

Kaoru Mitoma and Kyogo Furuhashi came on for Kamada and Takuma Asano on the hour mark and Mitoma, who had a goal and assist against Ghana, provided plenty of crosses from the left but none leading to a shot from his teammates.

Moriyasu sent on Ritsu Doan and Takefusa Kubo in search of an equalizer before Tunisia doubled their lead off another mistake from Yoshida.

Tracking back casually inside his own box, the Sampdoria defender was caught unaware from behind by Youseff Msakni, who took possession and provided a cutback for Sassi to tap in. 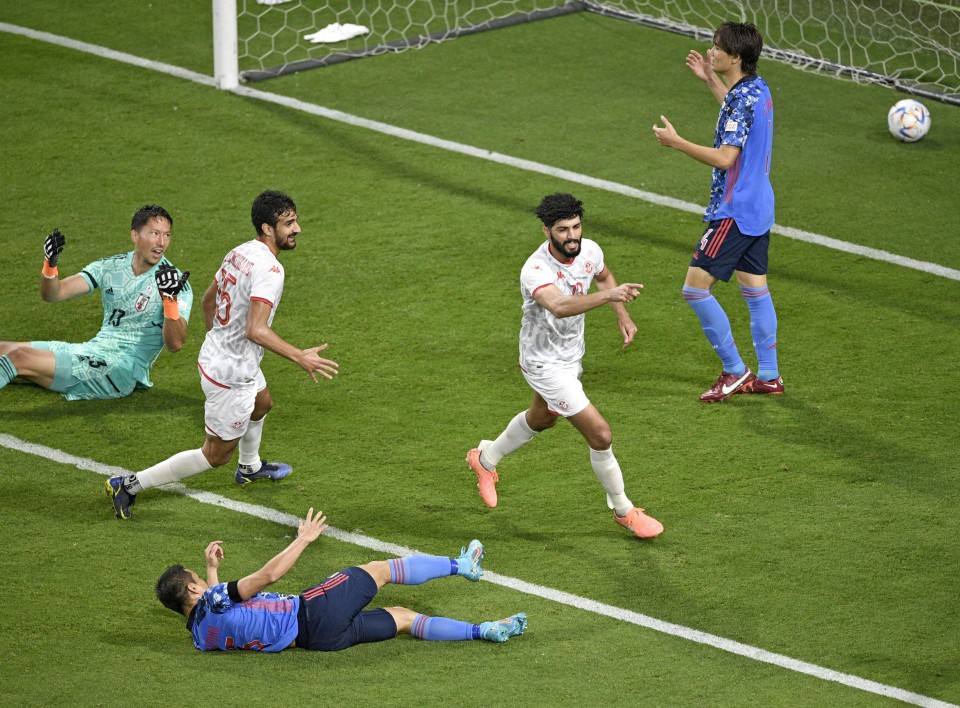 Ferjani Sassi of Tunisia (2nd from R) celebrates after scoring against Japan in the second half an international friendly at Panasonic Stadium in Suita, Osaka Prefecture on June 14, 2022. Tunisia won the game 3-0. (Kyodo)

"We failed to finish things off in the first half and conceded from easy mistakes when the game was still in balance," Yoshida said. "I should not have slid in (and conceded the penalty), there's no doubt that ruined our game."

Kubo sent a free kick into the side netting as Japan pressed forward, but the unfamiliar-looking frontline failed to create much before substitute Issam Jebali struck from distance in stoppage time to rub salt into the wound. 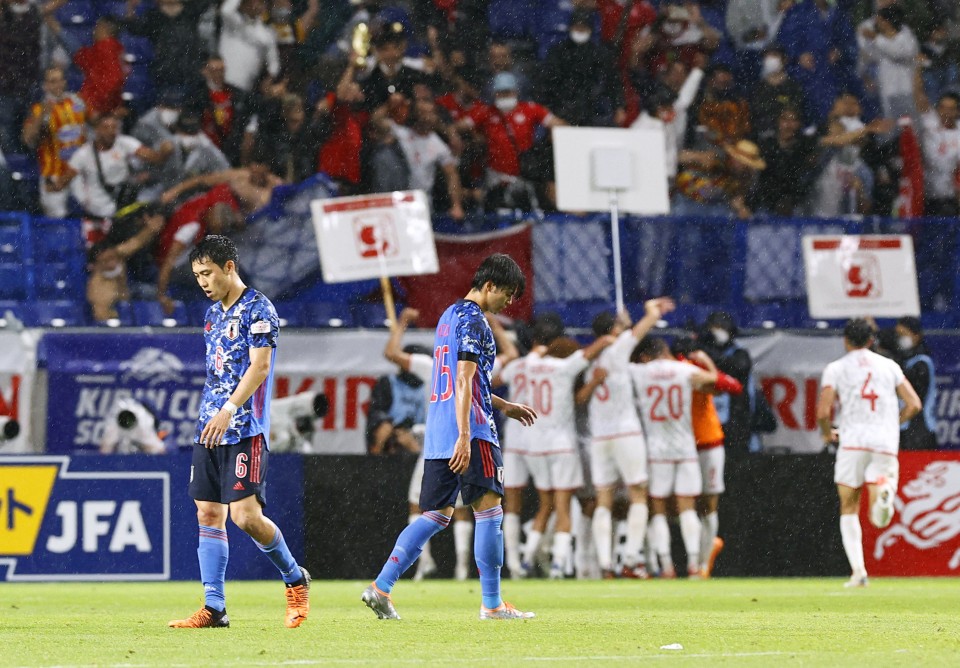 Wataru Endo (L) and Kaoru Mitoma of Japan look dejected as Tunisia's players celebrate an injury-time goal in the background to complete a 3-0 win in an international friendly at Panasonic Stadium in Suita, Osaka Prefecture on June 14, 2022. (Kyodo)

Japan will face Germany, Spain and either Costa Rica or New Zealand in Group E in Qatar, while Tunisia are in Group D alongside France, Denmark and Australia.