Over 10,000 food items in Japan will experience price increases of an average 13 percent this year as a result of rising materials costs and the yen's rapid depreciation, a survey by a credit research firm showed Wednesday.

The Teikoku Databank Ltd. survey found that 105 major food manufacturers had raised prices on 6,285 products by June, with price hikes planned for an additional 4,504 products from July onward.

A growing number of Japanese companies are selling products at higher prices as the coronavirus pandemic and Russia's ongoing invasion of Ukraine have caused the cost of everything from wheat to crude oil to rise. 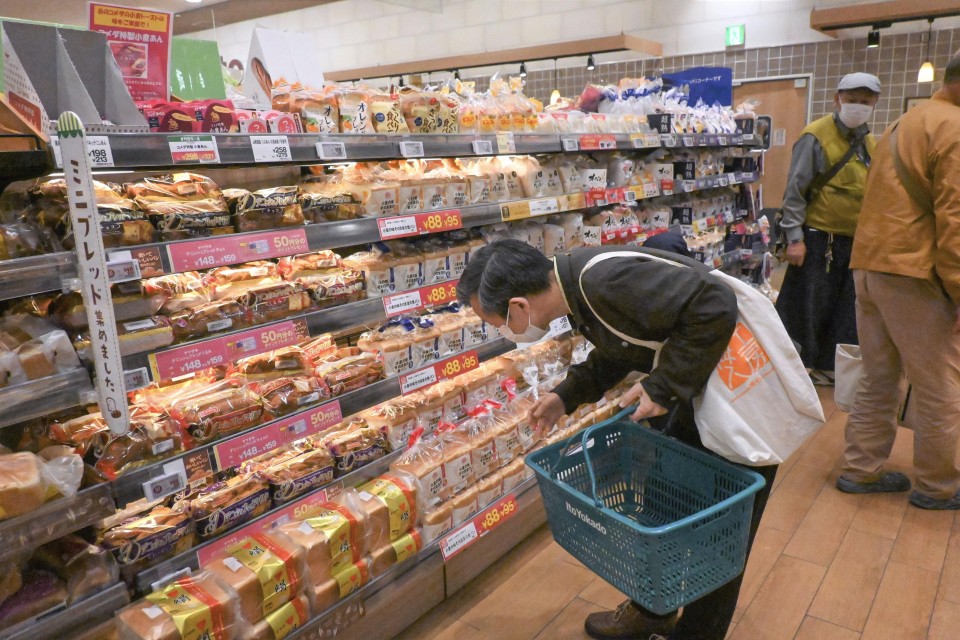 A shopper looks at products at a supermarket in Tokyo on May 2, 2022. (Kyodo)

Russia, the world's biggest wheat exporter, and Ukraine together account for about 30 percent of international exports of that grain, according to the U.S. Department of Agriculture.

The average price at which Japan's farm ministry sells imported wheat to the country's milling companies has risen by 17.3 percent since April. The selling price is calculated based on the average price of wheat that the government imported in the past six months.

The depreciation of the yen has presented further challenges for Japanese companies as it boosts import prices and leads to higher production costs.

In the past, companies have tried to minimize the impact on consumers through "stealth price hikes" -- a phenomenon known elsewhere as shrinkflation in which the size of products is reduced but the price is unchanged -- or several incremental price revisions, but soaring materials costs have "moved beyond" what they can absorb, Teikoku Databank said.

Alcoholic beverages and other drinks will see the largest price hikes at an average of 15 percent due to rising costs of wheat and plastic bottle packaging, according to the survey. Over 80 percent of the products will have their price increased in July or later.

The research firm said it is highly likely companies unable to absorb rising materials and production costs with the current price revisions will raise prices again within the year, with it describing price increases as moving at an "unprecedented pace."

The soaring prices have stoked fears of stagflation, a situation in which an economy experiences inflation during a recession, with post-pandemic recovery likely to be hindered as spending declines in struggling households.

Over 40% of Japanese firms to raise prices within a year: survey