Japanese Prime Minister Fumio Kishida and German Chancellor Olaf Scholz agreed Sunday to step up cooperation related to a Group of Seven summit to be hosted in Hiroshima next year when Japan holds the forum's presidency.

Kishida and Scholz confirmed they will seek to deepen defense cooperation between Japan and Germany and make arrangements for the launch of their defense and foreign ministers' meeting under the so-called two-plus-two format, the Japanese Foreign Ministry said.

The leaders met bilaterally on the first day of a three-day G-7 summit in southern Germany hosted by Scholz. 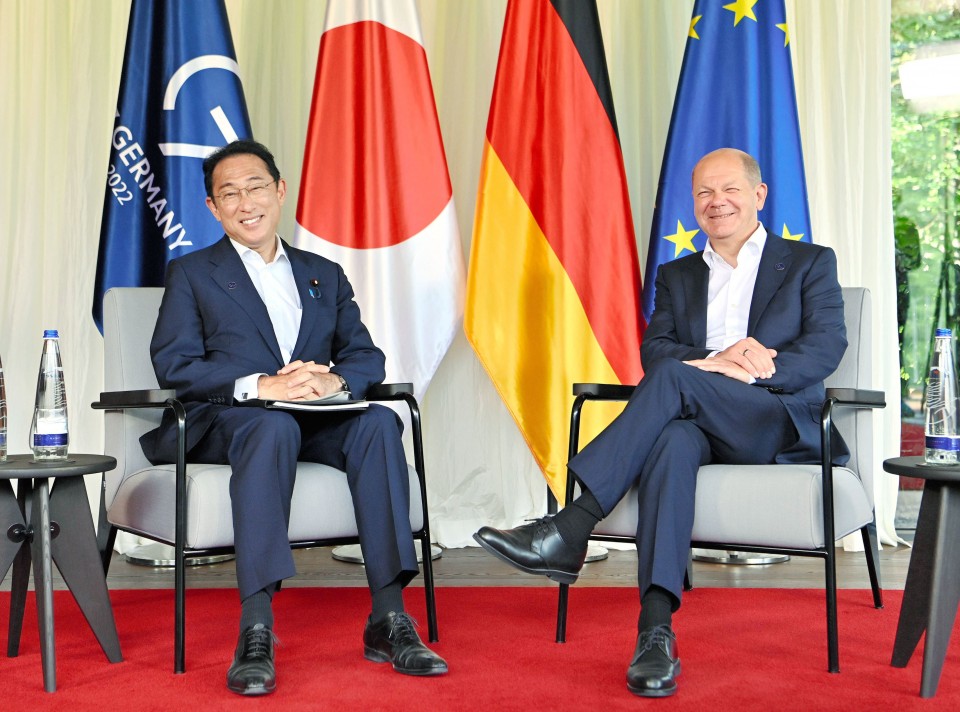 Japanese Prime Minister Fumio Kishida (L) is pictured with German Chancellor Olaf Scholz ahead of their talks at the G-7 summit in Schloss Elmau near Garmisch-Partenkirchen, Germany on June 26, 2022. (Pool photo)(Kyodo)

Japan is set to take over the presidency from Germany and hold the G-7 leaders' summit in Hiroshima, a city which was devastated by a U.S. atomic bomb on Aug. 6, 1945, to send a message of peace.

In a separate meeting, Kishida and French President Emmanuel Macron expressed their shared belief that "powerful" sanctions must be maintained on Russia in response to its aggression in Ukraine. They also agreed on the need to extend support to the war-hit nation, according to the Japanese ministry.

The two leaders agreed to work closely in helping countries most vulnerable to the food crisis caused by the war and to seek multifaceted cooperation in the Indo-Pacific, cyber, space and nuclear power.