Geopolitical and economic concerns are dominating headlines ahead of the upcoming House of Councillors election, putting the critical issue of Japan's stubbornly low birthrate on the backburner at a time when it needs to be front of mind for the government.

Experts on social and family issues stress the urgent need to create an environment that encourages people to have more children and seriously prevent a "future crisis" through investment in child care and other initiatives. 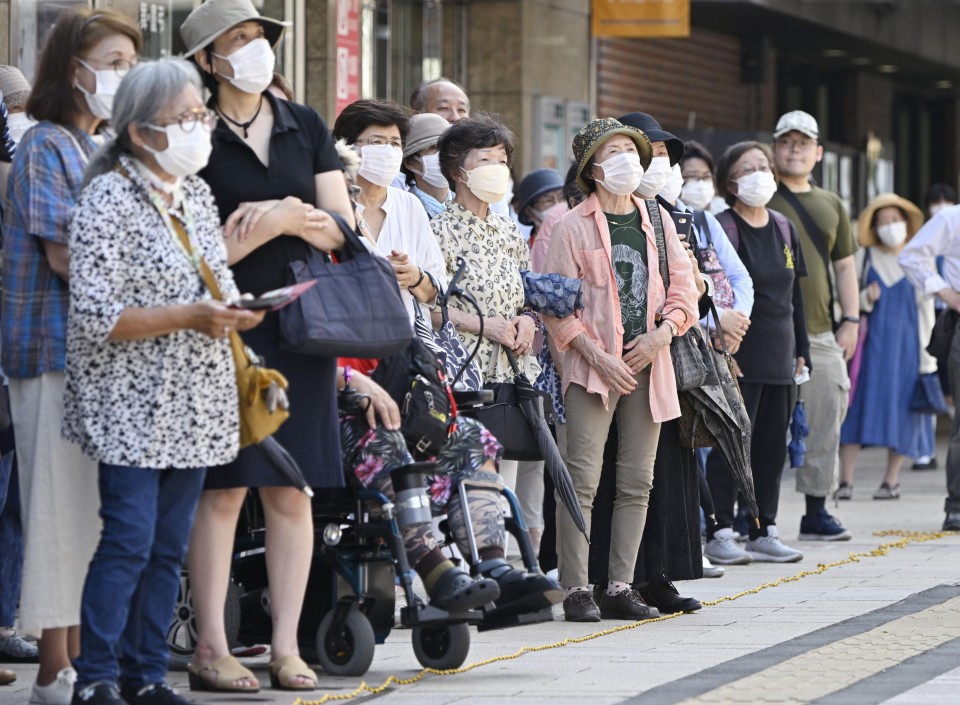 People listen to a candidate making a stump speech in Yamato in Kanagawa Prefecture, eastern Japan, on June 27, 2022, ahead of the July 10 House of Councillors election. (Kyodo) ==Kyodo

In an effort to protect and promote Japan's next generations, the government of Prime Minister Fumio Kishida is set to launch in April a new agency to comprehensively oversee children-related policies such as birthrates, child abuse and poverty.

Kishida, who is also the head of the ruling Liberal Democratic Party, has also vowed to double the budget on children "in the future," without giving concrete detail on when he would make it a reality, nor how he will come up with the funds.

Masahiro Yamada, a Chuo University professor on family sociology, expressed skepticism that the government can make a difference this time when it has failed so many times before.

"Japan tends to disburse much on imminent dangers such as the coronavirus pandemic, earthquakes or the Ukraine crisis, but not for a future crisis," said Yamada. "Unless we double or triple the budget, it won't be effective" in addressing Japan's low total fertility rate.

Japan has long expected parents to shoulder the bulk of child-rearing expenses, allowing the government to spend relatively little, but greater state engagement is now needed as economic conditions become increasingly difficult for families, he said.

According to data as of 2017 and later by the Organization for Economic Cooperation and Development, Japan spent about 1.8 percent of its gross domestic product on family benefits, below the OECD average of around 2.3 percent and trailing far behind France, which topped the ranking at 3.6 percent.

Among 37 comparable OECD countries, Japan ranked at the bottom in terms of how much national income was spent on educational institutions in 2018.

Criticizing Kishida's government for its lack of specific plans to promote policy for children, the main opposition Constitutional Democratic Party of Japan has called for raising related spending to 3 percent of Japan's GDP, but the party also has yet to explain how it proposes to achieve that target.

While the country struggles to lift the total fertility rate, or the average number of children a woman is estimated to bear in her lifetime, which stood at 1.30 in 2021, some local governments are taking matters into their own hands.

One of them is the western city of Akashi, which saw its birthrate climb to 1.70 in 2018 from 1.50 in 2011 and achieved population growth for nine consecutive years, leading to increased tax revenues.

The situation sharply contrasts with the nationwide figures, as the country's total population fell by the sharpest margin in 2021 to just over 125.5 million and a record-low 811,000 births amid the COVID-19 pandemic that took a toll on the already stagnant economy.

Under the leadership of Akashi Mayor Fusaho Izumi, who assumed the post in 2011, the city in Hyogo Prefecture introduced such measures as making medical expenses free for children up to the age of 18 without any means testing. It also implemented free nursery schooling for second children and beyond while tripling the number of officials working in the city's department for children.

The city also makes monthly deliveries of free diapers, food and other products to households with babies aged between 3 months and 1 year, with goods delivered by female staff who have experience raising children and are ready to assist and advise new parents if needed. 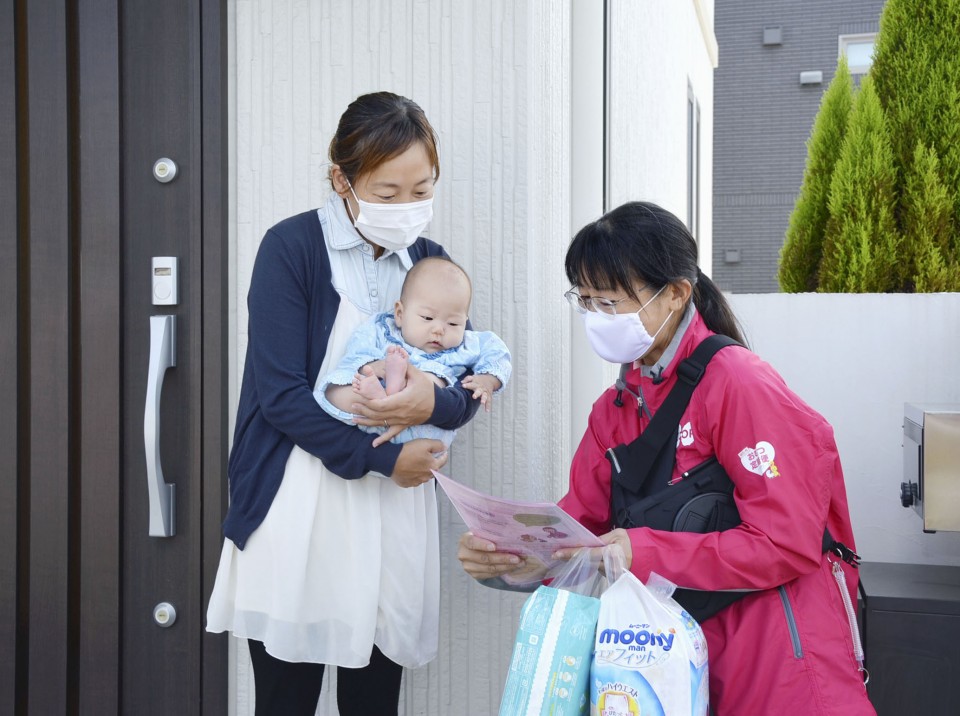 A female staffer (R) delivers free diapers to a household with a baby in October 2020 in the western Japan city of Akashi, Hyogo Prefecture, under a program to support childrearing. (Photo courtesy of Akashi city office)(Kyodo)

The program, which began in October 2020, is aimed at preventing families who are raising newborns from becoming isolated by establishing a program of routine visits in the period after a state health nurse makes a first checkup within the child's first 2 months of life, a city official said.

To fund such measures, the city has doubled spending on children to 25.8 billion yen ($190 million) in fiscal 2021 from fiscal 2010 by such means as cutting outlays on public works, Izumi said.

Izumi, who was invited to speak at a parliamentary committee meeting in early June, called on the central government to carry out similar measures, stressing the need to allocate sufficient funding for the new agency.

"Our society is too harsh on children," the outspoken mayor said, adding it is one reason behind the accelerated decline in birthrates and for the stagnation of the economy.

"It is obvious that if we fully commit to working on children, the birthrate will rise," he said.

Izumi said municipalities around Akashi are beginning to follow suit and are incorporating similar initiatives to make themselves attractive to young families and those hoping to start them.

Chuo University's Yamada said while such efforts by local governments set an example for the central government, they do not fundamentally resolve the issue as, by their very nature, they cannot have a wider impact.

"Of course, addressing the fertility issue will not translate into votes, and building roads or attracting manufacturing are more effective to that end," Yamada said.

"But unless we raise spending on children, our country will be left to decay," he said, calling for state-level involvement to address the problem regardless of the election outcome.