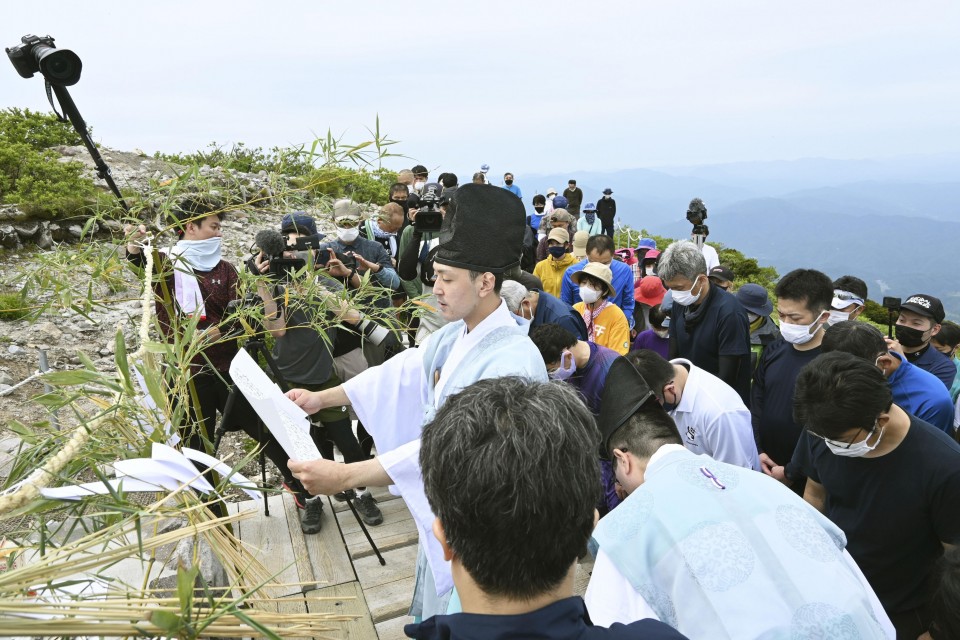 A ritual is held near the top of Mt. Daisen in Daisen, Tottori Prefecture, western Japan, on June 5, 2022, to pray for the safety of climbing ahead of the summer season. (Kyodo) ==Kyodo

TOKYO - More than 20 types of amino acids have been detected in samples Japan's Hayabusa2 space probe brought to Earth from an asteroid in late 2020, a government official said Monday, showing for the first time the organic compounds exist on asteroids in space.

With amino acids essential for all living things to make proteins, the discovery could hold clues to understanding the origins of life, the education ministry said.

TOKYO - Monetary tightening is not a "suitable" measure at all for the Bank of Japan as the domestic economy is still in the midst of a recovery from the COVID-19 pandemic while higher commodity prices are adding downward pressure, Governor Haruhiko Kuroda said Monday.

Even though core consumer inflation jumped 2.1 percent in April from a year earlier, it does not mean the BOJ's 2 percent inflation target has been achieved, Kuroda said, stressing that the central bank will not waver in its aggressive monetary easing to support the economy and ensure more robust wage growth.

YOKOHAMA - A Japanese court on Monday sentenced a 30-year-old man to a prison term of 18 years in a retrial over a 2017 road rage incident that resulted in the deaths of a couple and injuries to their two daughters.

The Yokohama District Court convicted Kazuho Ishibashi of dangerous driving after he overtook the car of Yoshihisa Hagiyama, 45, and his family on the Tomei Expressway in Kanagawa Prefecture, near Tokyo, on June 5, 2017, and forced it to stop in the passing lane where it was rear-ended by a truck.

SYDNEY - A Chinese fighter jet dangerously intercepted an Australian maritime surveillance plane over the South China Sea, endangering the aircraft and its crew, according to the Australian Defense Department.

The department said Sunday the Chinese J-16 aircraft intercepted an Australian P-8 Poseidon on May 26 while it was conducting routine maritime surveillance in international airspace over the highly disputed body of water.

TOKYO - Japanese municipalities that hosted overseas athletes for training camps before last summer's Tokyo Olympics and Paralympics will be eligible for new subsidies aimed at promoting people-to-people exchanges with their respective partner countries, sources familiar with the matter said Monday.

The Japan Sport Council will set up a subsidy program to cover part of the expenses, such as those for inviting athletes from abroad, the sources said, adding the program is due to begin in fiscal 2023 starting next April.

With little social awareness of the issue, the ministry wants to quickly create a support system for male victims of sexual violence by securing a better grasp of the situation, they said.

SEOUL - South Korea and the United States fired eight ballistic missiles into the Sea of Japan on Monday in response to North Korea's missile launches the previous day.

The allies launched the ground-to-ground Army Tactical Missile System projectiles from around 4:45 a.m. following North Korea's launches of eight short-range ballistic missiles, according to the Joint Chiefs of Staff of the South Korean military.

Sok Eysan, a spokesman of the Cambodian People's Party told Kyodo News that preliminary results suggested the CPP had obtained nearly 100 percent of all the seats in 1,652 communes across the country.