The Japanese government issued a power usage warning for the first time Sunday as sweltering temperatures in Tokyo and surrounding areas are expected to put pressure on the system as businesses reopen Monday.

The Ministry of Economy, Trade and Industry is particularly urging the public in Tokyo Electric Power Co.'s service area to save electricity via measures including turning off unnecessary lights in the demand-intensive 3 p.m. to 6 p.m. period on Monday. 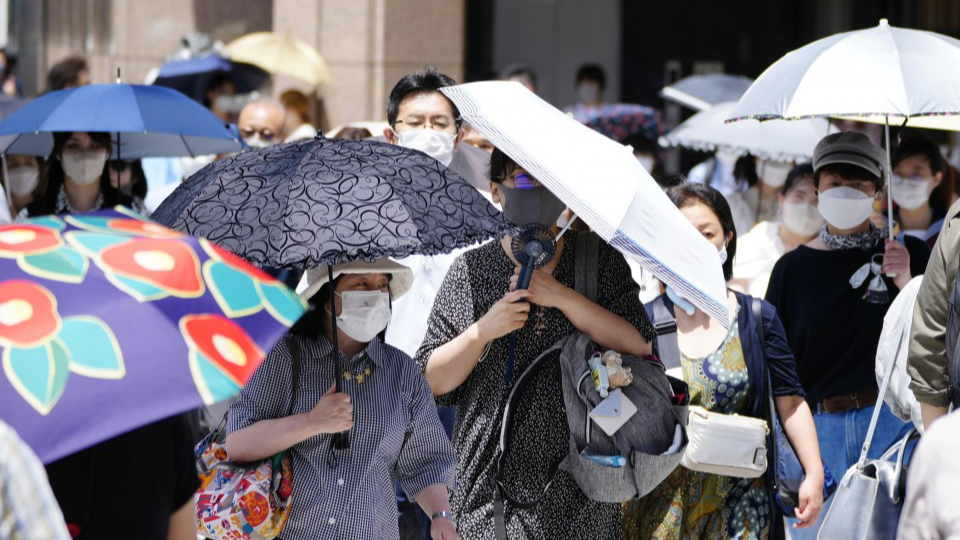 Pedestrians use parasols in Tokyo's Ginza area as the mercury climbed above 35 C on June 26, 2022. (Kyodo) ==Kyodo

The call comes as projections show the area's reserve power supply capacity ratio will be short of 5 percent Monday. The lowest level necessary for stable supply is said to be 3 percent.

Eastern Japan's Kanto region has endured record hot temperatures Saturday and Sunday, with the heat possibly continuing into Monday. Economic activities, including by private companies, will likely surge with the start of the week.

However, the ministry is calling on people to continue thorough use of air conditioners due to the heightened risk of heatstroke.

In TEPCO's service area covering Tokyo and eight nearby prefectures, reserve rates on Monday are projected to be 4.7 percent around the 4 p.m. to 4:30 p.m. period, falling to 3.7 percent for 4:30 p.m. to 5 p.m., according to the ministry.

Reserve rates in July are projected to be at 3.1 percent in the Tohoku, Tokyo and Chubu areas, and at 3.8 percent in regions including western and southwestern Japan.

The ministry's system for issuing a warning on power usage was introduced this year following a review into the response to high demand in March this year, when a powerful earthquake in the country's northeast region caused some power plants to halt.