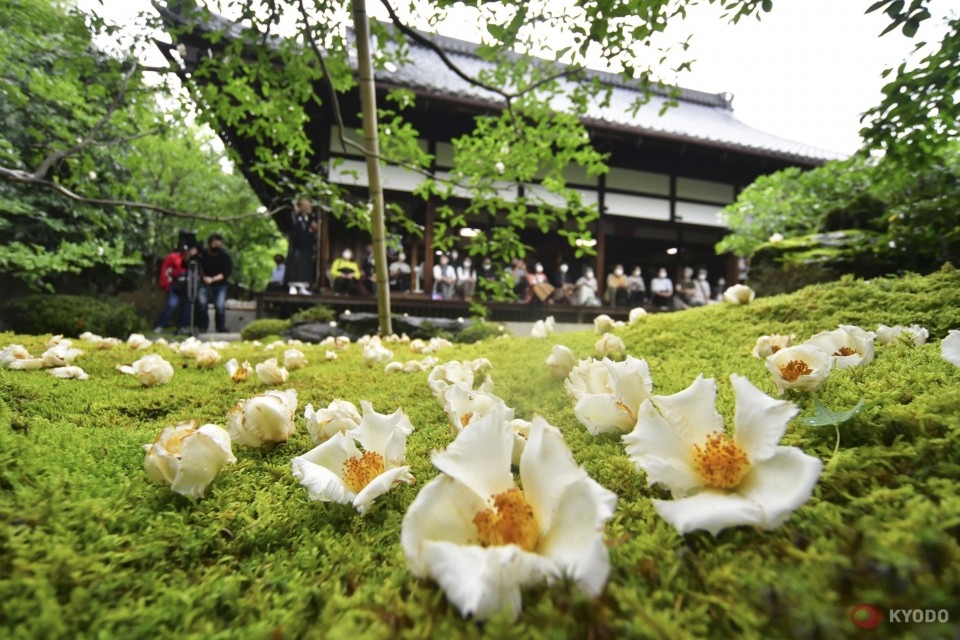 Japanese stewartias are in full bloom at the Torin-in temple garden in Kyoto on June 15, 2022. The flower blooms and falls from the tree in one day. (Kyodo) ==Kyodo

TOKYO - Japan's ruling party pledged Thursday ahead of a House of Councillors election to "fundamentally" reinforce the country's defense capability and increase spending on it in the next five years, as Russia's war on Ukraine has raised calls for a more robust posture.

The Liberal Democratic Party has in mind a target of roughly doubling the country's defense spending to 2 percent or more of gross domestic product, in line with the North Atlantic Treaty Organization.

TOKYO - The Group of Seven major developed nations are arranging a ministerial meeting in Germany late next week to discuss food shortages in regions such as Africa highly reliant on Ukrainian grain imports, as Russia's invasion of Ukraine continues, diplomatic sources said Thursday.

The envisaged meeting will lay the groundwork for a three-day G-7 summit to be held from June 26 in Schloss Elmau in southern Germany, where the food crisis is also expected to be on the agenda, according to the sources.

NEW YORK - U.N. Secretary General Antonio Guterres said Wednesday there is an "urgent need" for a total ban on nuclear weapons amid heightened tensions stemming from Russia's invasion of Ukraine, with Japan able to play an important role in achieving that goal.

His comments to Kyodo News came in advance of the first meeting to be held Tuesday in Vienna of state parties to the Treaty on the Prohibition of Nuclear Weapons, which entered into force last year.

TOKYO - Japan's transport ministry on Thursday revoked the license of the operator of a tour boat that sunk off Hokkaido about two months ago leaving 14 people dead and 12 missing, marking the heaviest administrative penalty ever imposed under the maritime transportation law.

An official at the ministry said the 19-ton Kazu I's operator "has repeatedly violated the law and shows no indication for improvement. If we allow it to continue its business, there is a high probability that a serious accident will occur again."

TOKYO - A Japanese court on Thursday ordered the operator of Tabelog, a popular restaurant review website, to pay about 38.4 million yen ($286,000) in damages to a Korean barbeque chain, judging that its rating algorithm is unfairly designed for chain outlets.

The Tokyo District Court found that the site operator Kakaku.com Inc. violated the antimonopoly law saying its algorithm, which uniformly lowered scores of chain restaurants, is considered an "abuse of dominant bargaining position."

North Korea reports outbreak of another infectious disease amid COVID-19

BEIJING - North Korea on Thursday reported an outbreak of another infectious disease at home, while the country has been struggling to curb the spread of the novel coronavirus.

North Korean leader Kim Jong Un has instructed officials to implement measures including quarantine, medical treatment and sterilization in a bid to contain an "acute enteric epidemic," according to the official Korean Central News Agency.