Hinata Miyazawa scored one goal and set up another Friday as Nadeshiko Japan dominated Serbia 5-0 in an international women's friendly.

The 22-year-old midfielder was one of four substitutes to net for current world No. 13 Japan, who used the clash in Stara Pazova, Serbia, to build toward the 2023 Women's World Cup.

The visitors played energetically with a high defensive line and led 1-0 at the break thanks to Riko Ueki's 28th-minute opener.

Miyazawa made an immediate impact after coming on for Ueki in the 60th minute, crossing for Hikaru Naomoto to head home Japan's second. 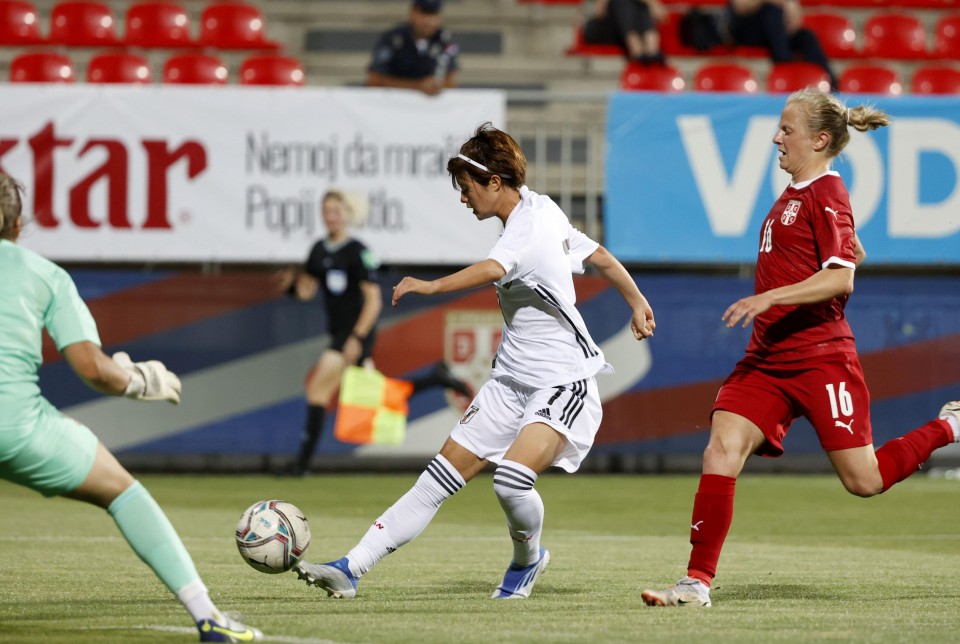 Hinata Miyazawa of Japan scores a goal in the second half of an international friendly against Serbia in Stara Pazova, Serbia, on June 24, 2022. (Kyodo)

MyNavi Sendai star Miyazawa showed impressive pace and control to score Japan's third in the 76th minute, running onto a through ball and chipping Serbian keeper Milica Kostic from a tight angle.

"We were able to play with speed and were conscious about getting out quickly from the back," Miyazawa said.

Remina Chiba and Yui Narumiya added late goals to complete the rout against the 36th-ranked Serbs.

Japan manager Futoshi Ikeda praised his side for a positive performance in the wake of their semifinal exit from the Women's Asian Cup in February.

"We aimed to win the ball by defending aggressively high up the pitch, and were able to score goals with many players getting involved in attack," Ikeda said.

Japan will play another friendly against 29th-ranked Finland in the southern Finnish city of Turku on Monday.