A flying balloon carrying a hamster has been launched into the stratosphere to an altitude of 23 kilometers and returned safely, a Sapporo-based space venture said recently as it aims to realize "space travel" using balloons.

The success of a first test flight with a mammal by K.K. Iwaya Giken appears to have given momentum to the manned flight experiment that the company aims to carry out within the year.

The hamster was aboard a cabin the company had developed and lifted off with a balloon in Miyakojima, Okinawa Prefecture, on June 9. 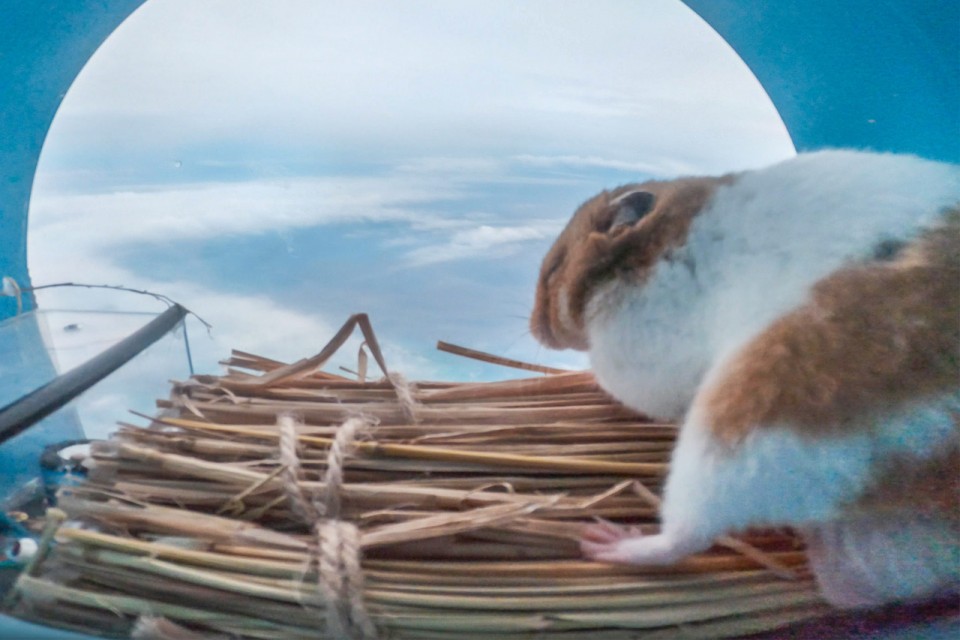 A hamster looks out the window of a cabin about 12 kilometers up in the air over Miyako Island in southwestern Japan. (Photo courtesy of K.K. Iwaya Ginen)

The balloon gained altitude at an average speed of 6.3 meters per second and reached 23 km up in about an hour, before it landed in the sea off Miyako Island and was recovered.

The firm confirmed by monitoring sensors during the test flight that the reinforced plastic cabin in a cylindrical shape 60 centimeters high and 50 cm in diameter keeps the internal levels of oxygen, temperature and pressure almost the same as on the ground.

The hamster is in good health, it said.

Iwaya Giken is planning a manned test flight to an altitude of 25 km, where people can "feel outer space" by seeing the curve of Earth clearly.

"We will continue to carry out experiments so that people can get on board and return safely," a spokesperson said.