After crossing a wide, brown river with thick virgin mangroves on its banks, a motorboat arrives at its destination -- an isolated region that brings on an otherworldly feeling of distance.

The boat could barely carry five people on its short, rocking journey through Indonesia's Asmat Regency in the easternmost province of Papua, an area that occupies most of the western half of New Guinea, the second largest island in the world, and is considered to be the country's least developed region. 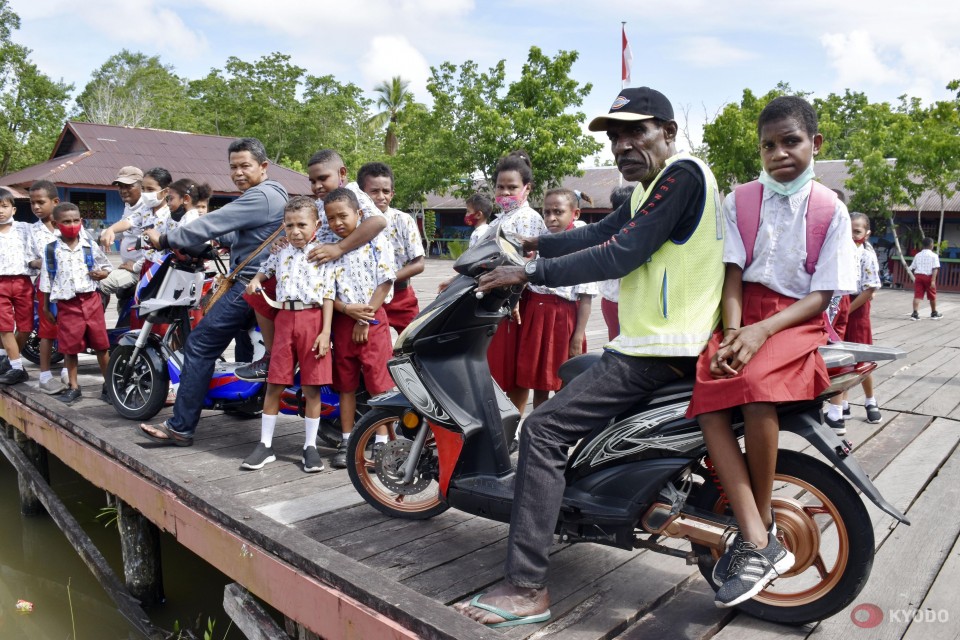 Photo taken in November 2021 shows Felix Ndiken (2nd from R) with his daughter Patrisia on the back of his electric motorbike at her elementary school campus in Agats, the administrative seat of Asmat Regency in the easternmost province of Papua, Indonesia. (Kyodo)

But within Asmat exists an even more remote area called Agats, which can only be accessed by boat. Coming ashore there, the narrow roads in this settlement, that sits elevated on poles above marshlands, buzz with electric motorbikes.

The buildings, houses and roads in Agats, the administrative seat of Asmat Regency, were built 1.5 meters above the wetlands with roads 4 meters wide.

Most of the town's roads were once made of wood, with some remaining so, earning Agats the name of "the town of a thousand boards." Before the arrival of the electric motorbikes, most simply walked or used bicycles.

"When I was a district chief, I walked from home to office and back every day," Asmat Regent Elisa Kambu recalled of his first years of assignment living in the regency.

The battery-powered "whine" of the motorbikes is distinctive but not intrusive, even as they approach.

On Agats, the use of gasoline-powered vehicles is limited to the military, police vehicles, and ambulances because of the risk of accidents, and electric motorbikes have become the means of transportation for many. In 2009, a bylaw was issued, banning the import of fuel-powered motorcycles.

Ambo Asse Manili, head of the Asmat Transport Agency, says although electric motorbikes began arriving in the town in 2006, they became much more prevalent from around 2010.

"From around (2010) Agats saw more development of concrete roads that were wider," Manili, 53, said in his single-story wooden office.

According to Manili, by the end of 2020, 5,050 electric motorbikes were registered in the regency with 80 percent of them in Agats, which has a population of 24,000. Some households own two or three motorbikes, and there is a 30 to 40 percent increase in the number of the vehicles each year. 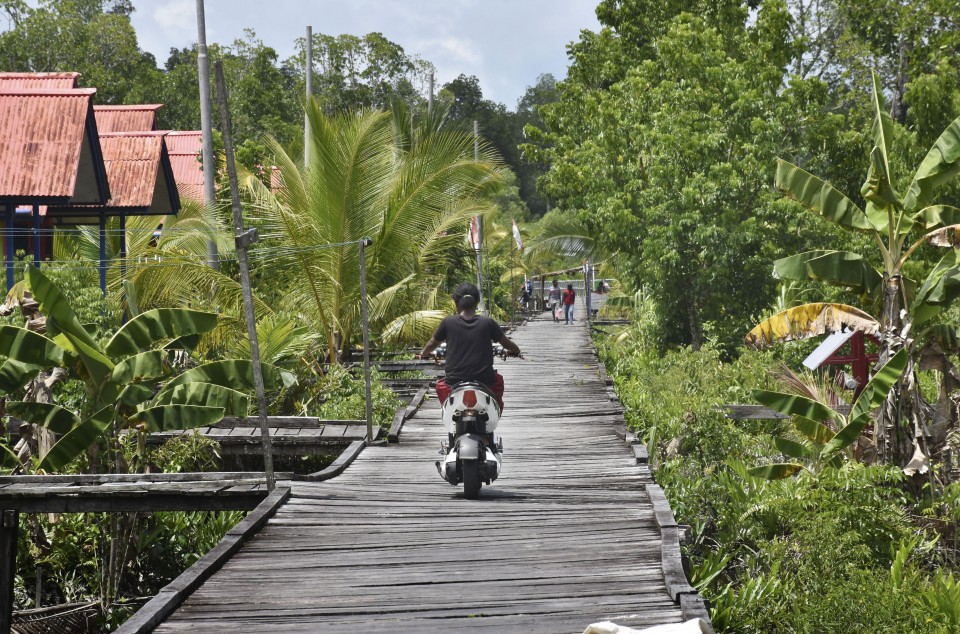 Photo taken in November 2021 shows a local riding an electric motorbike across wooden planks elevated above marshlands in Agats, the administrative seat of Asmat Regency in the easternmost province of Papua, Indonesia. (Kyodo)

"This is the only regency capital in Indonesia where electric motorbikes have gained such popularity," Manili said.

The distances in Agats are short. From one end to the other is only about 5 kilometers. Unlike fuel-powered motorbikes, the battery-powered versions only reach maximum speeds of about 20 to 30 kilometers per hour and are much less prone to accidents -- a big reason why the government has pushed for their use.

When Indonesian President Joko Widodo came to Agats on an inspection tour following a measles outbreak and malnutrition crisis in 2018, he rode one of the electric motorbikes himself.

Most of the motorbikes used in Agats are made in China, shipped by boat from Surabaya, Indonesia's second-largest city in eastern Java.

Each motorbike costs between 12 million ($814) and 14 million rupiah, not cheap for residents whose monthly minimum wage is around 3.5 million rupiah. However, they are so popular now that some sellers have backorders.

Two- and three-passenger electric motorbikes come and go on daily errands in front of roadside vegetable stands, vital for the functioning of local life.

Riding around from morning till late at night, motorbike taxi driver Felix Ndiken has seized upon the job opportunity the vehicles have brought to the town as the only means of public transportation.

Ndiken, 56, heads out at 6:30 a.m. with his 12-year-old daughter Patrisia on his motorbike to take her to school. After dropping her off, the father of nine starts his busy day -- bringing students to schools, housewives to markets and office workers to their workplaces. He has made the electric motorbike his "tool of trade" for the past six years.

Nearly 20 years ago, Ndiken moved to the regency from his hometown Merauke, a town on the southern tip of Papua, to join his wife, who is a civil servant stationed in Agats. He had been working in construction, but he decided to try his luck in the motorbike taxi business on his employer's recommendation.

Concerned about the future of locals in Agats, in September 2019 Ndiken established the "Papua Asmat Bike Taxi Association," gathering together about 50 people, mostly uneducated and unemployed young Asmats in their 20s and 30s.

He wants them to become less dependent on government assistance the regency receives as one of the least developed in Indonesia.

The government has been building houses for them, providing free electricity, etc. They also receive cash every month, either from the government or U.S. giant copper mining company Freeport, but Ndiken believes this can adversely affect peoples' desire to work and their independence.

Ndiken can earn some 400,000 rupiah a day, but his income was cut in half due to the coronavirus pandemic. Although he owns his electric motorbike, many members have to pay 50,000 to 100,000 rupiah a day to rent one for work, and the drop in income has been more serious for them.

"Job opportunities for the locals keep declining -- snatched up by migrants," Ndiken said.

His goal is for the association to own more electric motorbikes and rent them to members for a small fee. But he cautions the youth who he views as apathetic to "be players, not just spectators."

By all accounts, the development of this region of Indonesia, the largest island nation in the world, has been neglected. It was only around the end of 2015 that electricity became available 24 hours a day in the main areas of Agats.

From some perspectives, Agats is still considered a "frontier." Economically, there are structural advantages for migrants from Java and Sulawesi that are unavailable to Papuans, with the locals often looked down upon by other Indonesians.

Ndiken considers electric bikes to be a pathway to prosperity, with some association members, like a 32-year-old man Ndiken introduces who recently passed the civil service exam while working as a motorbike taxi driver and studying at university, a perfect example.

Another of his members is a woman who combines her role as a mother with her work on the motorbike. Whoever it is, Ndiken speaks passionately about them all.

"This is for the independence of Papuan people," he said.