Financial education for young children is expanding in Japan to enhance their understanding of money, prompted by compulsory requirements in high school and the reduction of the age of adulthood from 20 to 18.

The need comes as opportunities to handle cash decrease with the spread of electronic payments, and as adults worry how to develop their children's "money sense." Teachers, meanwhile, are turning to familiar games and recreations to help get the message across.

In late May, a card game was held in a class of fifth-graders at the Kamakura Elementary School attached to Yokohama National University in Kamakura, Kanagawa Prefecture. Pupils were divided into groups of four to five and instructed to indicate what they determined to be more valuable, an "object" or "behavior" from randomly picked cards. 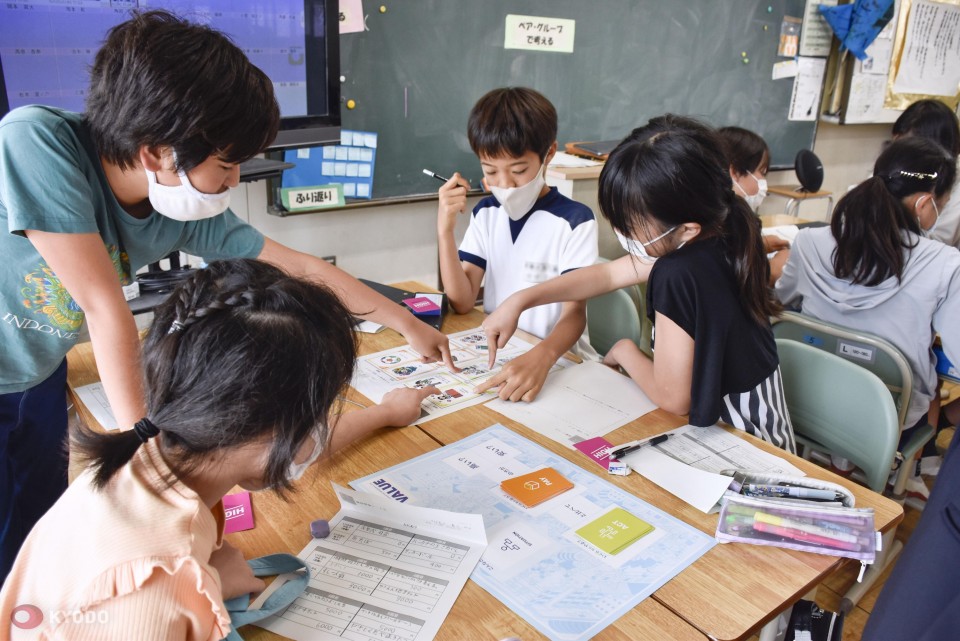 Pupils at Kamakura Elementary School attached to Yokohama National University in Kamakura, Kanagawa Prefecture, play a game where they assign the highest value to "objects" and "actions" from randomly selected cards as part of a lesson in financial education on May 25, 2022. (Kyodo)

In a group that picked "one-hour care of a sick person" and "a colored pencil," Mihiro Tajima and Ako Goto picked care, saying it should not be treated simply as a matter of money. Tenma Saito agreed but for a different reason, saying that "I imagined my grandma as the sick person."

Another student, Tendo Tashiro, chose the pencil because of his fondness for drawing pictures, adding, "When it comes to care, it would depend on who needs it. There may also be a risk of getting infected."

"What we think has value and what we'll pay money for changes depending on the person and the age. Let's figure it out for ourselves," Mai Araya, the teacher, said to her pupils.

"Most students commute by train and do shopping via electronic payment using their IC transit cards. Since there are few opportunities to receive change, it is hard to get a sense that they've spent money," Araya said after the class.

"I hope that with money as a gateway, they will turn their attention to society and working people and discover the values" of various things, she said. 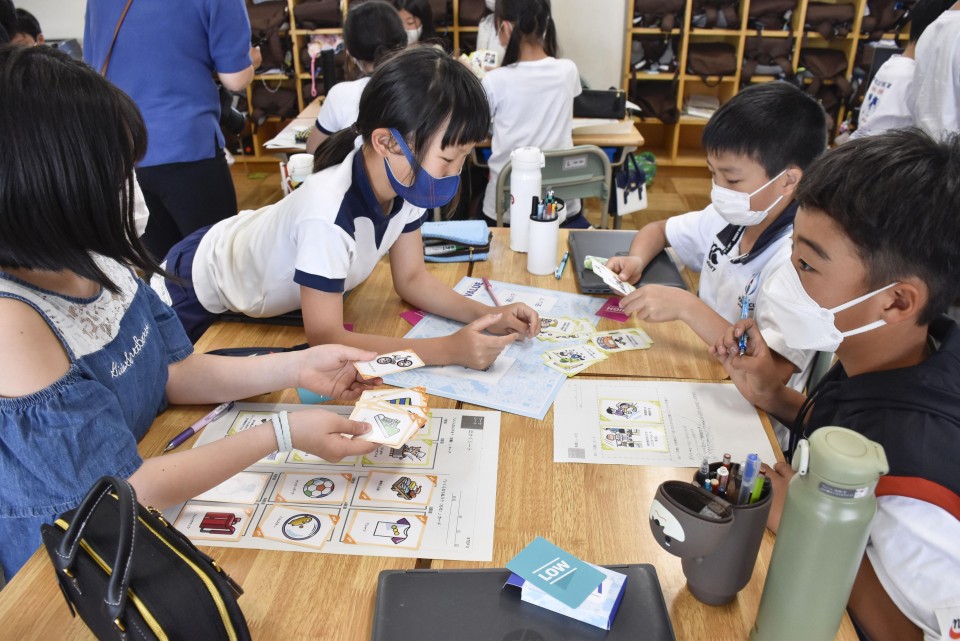 Pupils at Kamakura Elementary School attached to Yokohama National University in Kamakura, Kanagawa Prefecture, play a game where they assign the highest value to "objects" and "actions" from randomly selected cards as part of a lesson in financial education on May 25, 2022. (Kyodo)

The card game is part of a financial education program developed by Mitsubishi UFJ Morgan Stanley Securities Co. to help elementary school pupils think about the value of goods and services for themselves through the flow of money.

With the financial services company starting to supply the program in April, national, public and private elementary schools in six prefectures have introduced or decided to introduce it. If requested, the Tokyo-based company dispatches employees to schools as instructors.

The number of accounts newly opened at MUMSS by people aged 18 and 19 in April and May increased more than sevenfold from the corresponding period in 2021 because, according to a company official, "the drop in the legal age of adulthood has made young people recognize the need to build their assets earlier than in the past."

MUMSS hopes to encourage the next generation of investors through the educational program designed to help children properly understand investments and risks. 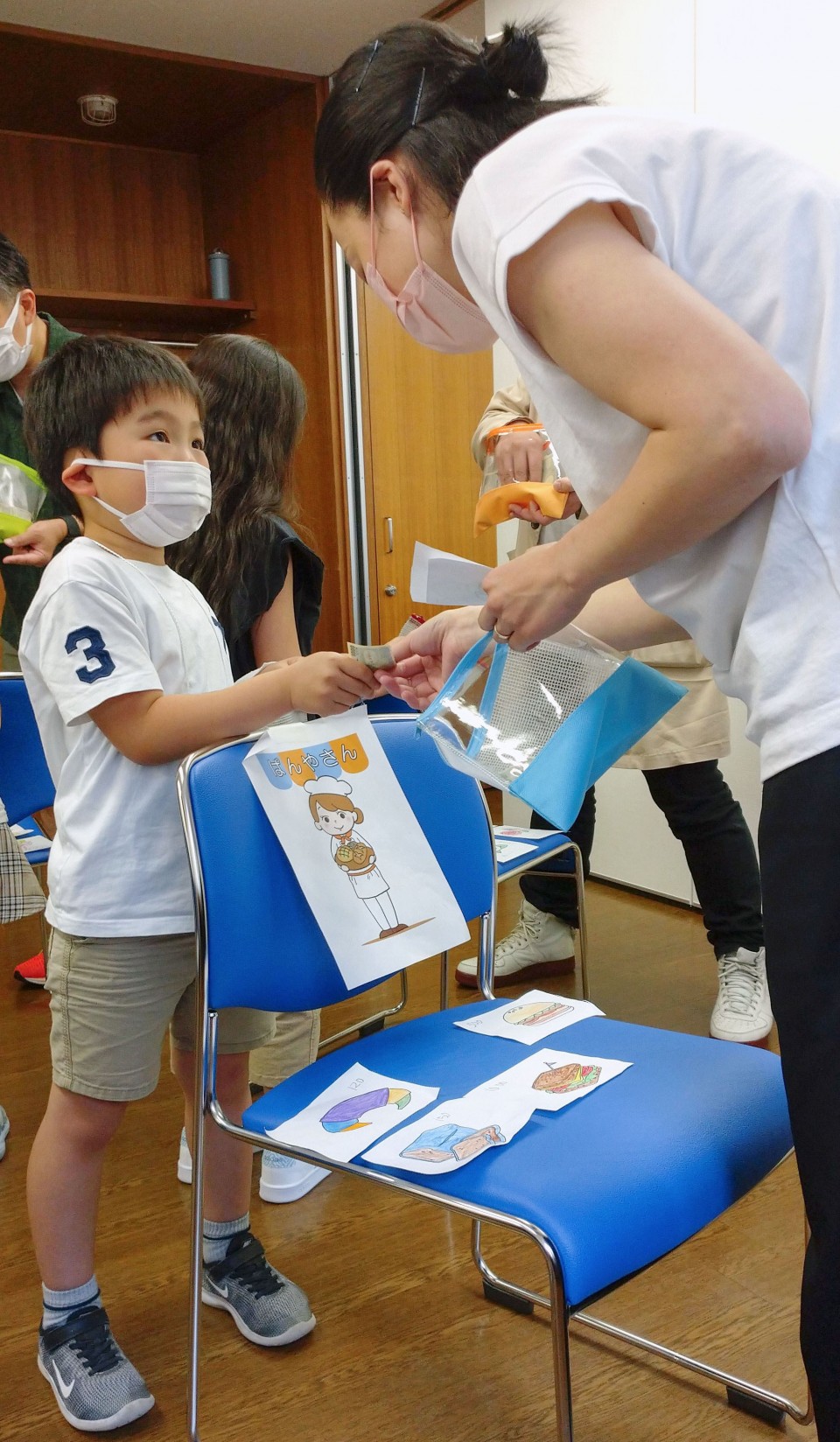 Photo taken in May 2022 shows children at a Kid's Money School event in Tokyo experiencing exchanges in money and products at a mock shop. (Kyodo)

Kid's Money School, an organization in the city of Oita that provides financial education to children aged 4 to 10 across Japan, has witnessed a steep rise in inquiries about its programs from schools and local governments since last year.

Adults tend to feel money is a "scary" thing to talk about in the presence of children, said Koji Miura, head of the organization, which began to hold classes for parents and children in 2014. "But kids can flexibly understand the mechanism of money and absorb (the concepts)," he said.

In a class held in Tokyo in May, five children aged 5 to 8 accompanied by their parents experienced exchanges in money and products at a mock shop. The kids were impressed with the "heavy" weight of a bag full of one-yen coins equivalent to a foreign bank bill.

In the past, financial education was meant to teach girls household management and boys about finance in the economy, said Kyoko Uemura, professor of household economics at Tokyo Kasei Gakuin University.

But education has "evolved to the point where people learn the management of their own living expenses regardless of gender," she said. "Adults shouldn't be afraid to talk about money in daily conversation with their kids."