Japanese Defense Minister Nobuo Kishi voiced concern Tuesday over the recent modernizing of a Cambodian naval base with Chinese aid, during a meeting with his Cambodian counterpart.

Kishi urged Tea Banh to explain the rationale behind modernizing the Ream Naval Base, ASEAN sources told Kyodo News, at a time when China continues to expand its territorial ambitions in the East and South China seas. 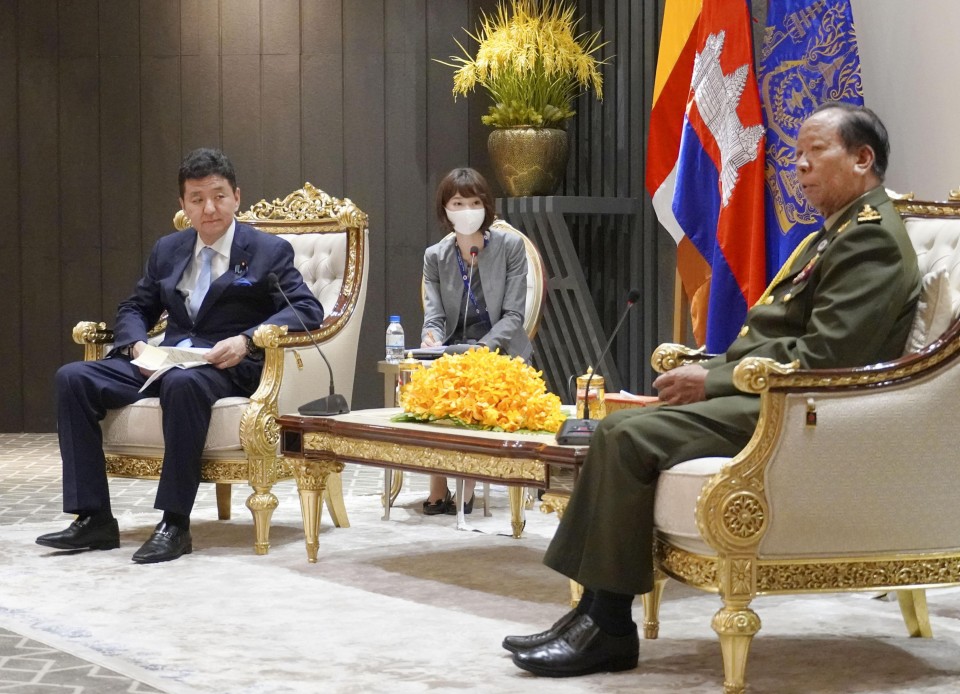 The base, which is strategically located on the Gulf of Thailand, near the South China Sea, has been a source of geopolitical tension. The sea is where China's territorial claims are overlapping with some Southeast Asian countries.

The United States has been alarmed in recent years over Cambodia's demolition of U.S.-funded buildings at the base. It has also expressed concern over a Chinese military buildup there, which Cambodia denies.

But Tea Banh told Kishi the base needs to be modernized to enable ships from Japan and elsewhere to easily dock and have vessels repaired, saying Cambodia had to send vessels in need of repairs overseas, the sources said.

With China's growing maritime assertiveness in mind, Kishi told his Cambodian counterpart that Japan will not tolerate any unilateral attempt to change the status quo by force.

Their talks came a day before Cambodia hosts an in-person meeting between defense ministers of Japan and the 10-member Association of Southeast Asian Nations. It would be their first such meeting since November 2019, according to Japan's Defense Ministry.

In his bilateral talks, Kishi also raised concern over Russia's possible participation in the meeting in November of ASEAN defense ministers plus eight countries including Japan, the United States and Russia, the sources said.

Kishi was quoted by the sources as telling Tea Banh that should Russia, which invaded Ukraine in late February, be invited to the meeting, Japan would reconsider whether to take part.

However, Tea Banh said it is too early to raise concern over Russia's participation and that the situation in Ukraine could change by then, according to the sources.