A survivor of the 1945 atomic bombing in Nagasaki on Monday appealed for the understanding of the inhumanity of nuclear weapons at an international conference in Vienna, ahead of the first meeting under a U.N. treaty to ban such arms.

"The atomic bomb is a weapon of inhumanity and of absolute evil, with which human beings cannot exist and which does not allow us to even live or die as human beings," said Sueichi Kido, 82, after describing the moment the bomb fell above the Japanese city at the Conference on the Humanitarian Impact of Nuclear Weapons. 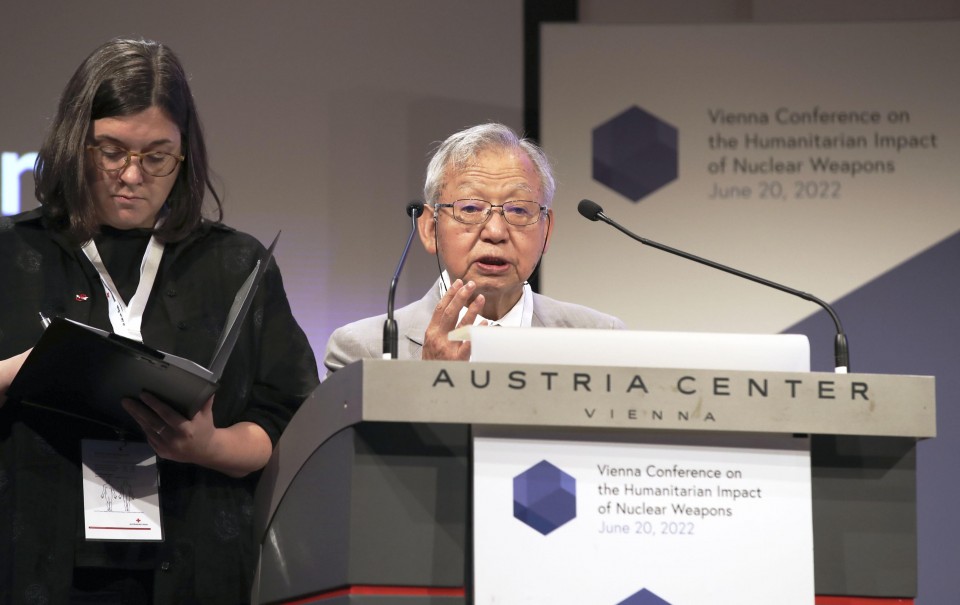 Sueichi Kido addresses the Conference on the Humanitarian Impact of Nuclear Weapons in Vienna on June 20, 2022. (Kyodo)

The anxiety and suffering of the atomic bomb survivors are "not something that fades away, but something which continues through their lives," Kido, secretary general of the Japan Confederation of A- and H-bomb Sufferers Organizations, said through an interpreter.

The one-day conference, held by the Austrian government, came a day before the three-day meeting through Thursday of the signatory states to the Treaty on the Prohibition of Nuclear Weapons in Vienna. Japan, the only nation to experience the devastation of atomic bombings, has not signed the pact.

Tokyo has decided not to take part in the TPNW meeting, even as an observer, despite high expectations for its attendance by survivors of the U.S. atomic bombings of Hiroshima and Nagasaki in August 1945, as well as nations that have joined the U.N. treaty.

"We have continued to appeal to the world for the abolition of nuclear weapons and for a world without war...the treaty embodies this very aspiration of hibakusha," or atomic bomb survivors, Kido said.

He added he "sincerely hopes for the great success" of the TPNW meeting.

Speaking in English, Suzuka Nakamura, a 22-year-old university student whose grandmother was exposed to fallout from the atomic bomb in Nagasaki, said it is "up to us to remember the horror of the atomic bombings and to prevent repetition of the same mistakes in the future."

In reference to Russia's invasion of Ukraine, Nakamura said, "Now people of Ukraine and the world are horrified by Russian President (Vladimir) Putin's threat to use nuclear weapons in the current war in Ukraine."

"And hibakusha, who know the horror of nuclear weapons, feel that fear more than anyone else," she said.

Meanwhile, Nakamura, who spoke along with Kido as government representatives, showed her "regret" at Tokyo's absence in the upcoming TPNW meeting.

The international conference on the humanitarian impact of nuclear arms has taken place three times since the first one in Norway in March 2013. Japan has participated in every conference.

The TPNW treaty is the first international pact outlawing the development, testing, possession and use of nuclear weapons, taking effect in January last year.

But the United States and other nuclear-armed nations are not part of it, and Japan is aligned with them as it has a long-standing security alliance with Washington that offers the shelter of its nuclear umbrella.