Ukrainian President Volodymyr Zelenskyy urged the world on Saturday to take steps to prevent wars from happening, saying conflicts like the one Russia is waging on his country could take place anywhere.

"Today's example of Ukraine is an example for the whole world," Zelenskyy said in a virtual address at a high-profile Asia security forum in Singapore, while calling on the global community to "support any action that is related to preemptive measures to forestall violence." 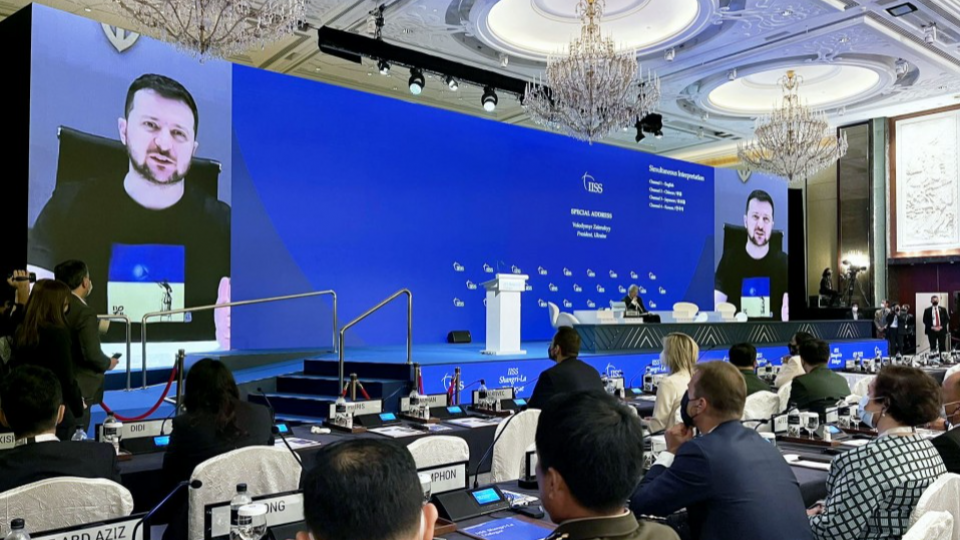 Ukrainian President Volodymyr Zelenskyy delivers an online speech at the Asia Security Summit in Singapore, known as the Shangri-La Dialogue, on June 11, 2022. (From International Institute for Strategic Studies' Twitter account)(Kyodo)

His remarks were in response to a delegate's question referencing Japanese Prime Minister Kishida's speech delivered Friday at the annual Asia Security Summit known as the Shangri-La Dialogue. Kishida had expressed a strong sense of alarm that "Ukraine today may be East Asia tomorrow."

Russia's war on Ukraine has triggered concerns over unilateral attempts to change the status quo, which could reverberate in Asia amid Beijing's growing military and economic clout and tensions over Taiwan, a self-ruled democratic island that China regards as its territory.

Zelenskyy said "no one benefits" from war except for "certain political leaders" with growing ambitions.

The war in Ukraine, which started in late February, has claimed the lives of more than 8,000 civilians as of late May and forced more than 7 million people to flee the country, according to data from the United Nations.

For countries under threat, there is a need to find diplomatic solutions so as not to leave them "at the mercy of another country which is more powerful" in size as well as financially and militarily, the Ukrainian president said in a speech.

With still no signs of the war abating, Zelenskyy warned of the global repercussions of the Russian blockade on Ukraine's food exports, warning there could be an "acute and severe food crisis and famine" in many countries in Asia and Africa.