As prices of necessity goods such as food and electricity soar following Russia's invasion of Ukraine, political parties in Japan are struggling to present immediate solutions as they head into the July 10 election for the upper chamber of parliament.

Since Japan is a resource-importing country, surging energy prices and rapid falls of the yen against the U.S. dollar are two major factors driving up prices, which voters believe has become the most pressing election issue.

However, steps for a short-term fix are limited because rising commodity prices and the yen's depreciation, which stems from widening interest rate differentials between Japan and the United States, cannot be addressed by Japan alone, economists say.

"What the government can do is like symptomatic treatment to ease pain but not the cure," said Takeshi Minami, chief economist at the Norinchukin Research Institute. 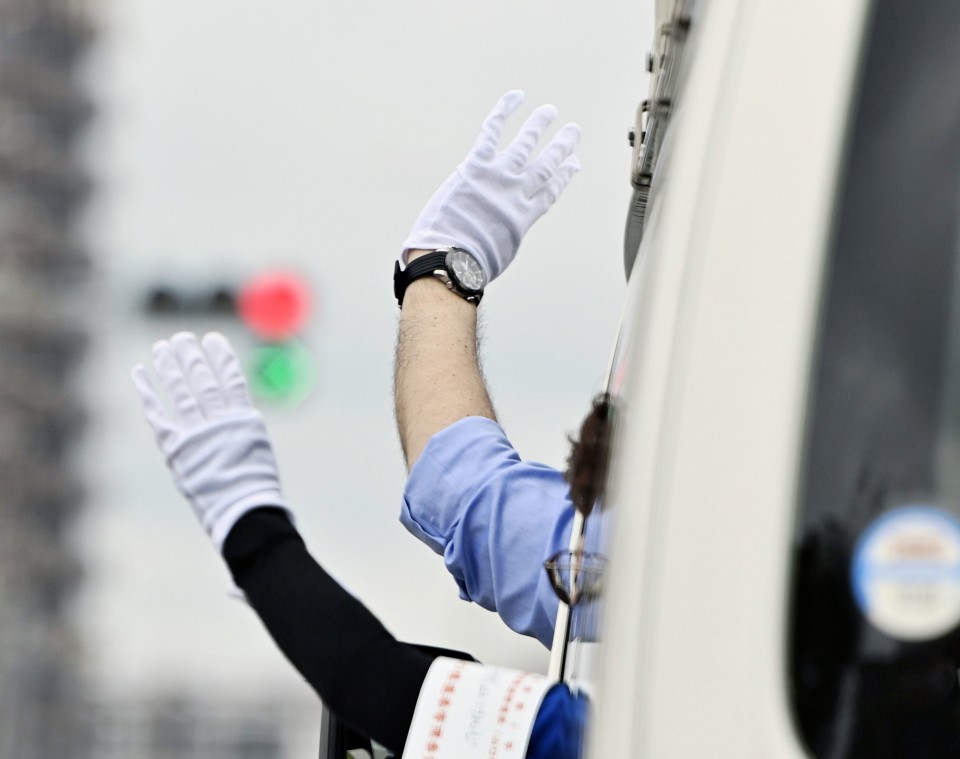 A candidate (back) waves from a car in Shimonoseki, Yamaguchi Prefecture, on June 22, 2022, as official campaigning for the July 10 House of Councillors election began the same day. (Kyodo)

Minami was referring to fiscal measures such as cash handouts for low-income households and subsidies for oil wholesalers to keep retail gasoline prices at bay.

He and other experts believe cutting the consumption tax rate and tightening the ultraeasy monetary easing -- measures opposition parties insist are effective in tackling economic challenges -- are unrealistic due to the coronavirus pandemic-hit economy.

"The economy is still on a recovery phase and not strong enough to withstand possible monetary tightening by the Bank of Japan," said Saisuke Sakai, senior economist at Mizuho Research & Technologies. "It's also not feasible to reduce the tax rate given the sustainability of the debt-ridden state finances."

During the campaigning for the House of Councillors election, Prime Minister Fumio Kishida, president of the ruling Liberal Democratic Party, said he will focus on curbing prices of oil, electricity, wheat, fertilizer and livestock feed.

About 60 percent of the recent rise in consumer prices was attributable to energy, about 20 percent to fresh food and the remaining 20 percent to other food, a government analysis shows.

Russia's war in Ukraine has sparked the global food crisis as both countries are major food exporters, with Moscow being the top wheat exporter and Kyiv the fifth.

While the LDP and its junior coalition partner Komeito rule out lowering the consumption tax rate from the current 10 percent, opposition parties are calling for slashing the tax -- or even abolishing it -- as part of efforts to mitigate the impact of surging prices.

The main opposition Constitutional Democratic Party of Japan has pledged to temporarily reduce the consumption tax rate to 5 percent, with expected shortfalls to be covered by government bond issuance.

Reiwa Shinsengumi said the party will abolish the tax and the Social Democratic Party called for setting the tax rate at zero for three years.

The Democratic Party for the People and the Japanese Communist Party also called for halving the rate to 5 percent, with the DPP saying the tax cut should be in place for a certain period of time.

An upper house election is not designed to choose a new administration but the coming poll will influence the course of Japanese politics -- and the fate of Kishida -- for the next few years.

A recent Kyodo News poll showed the LDP and Komeito are leading in the race for the 125 seats up for grabs, a development that would allow the governing coalition to maintain a majority in the 248-seat chamber.

With the ruling and opposition camps split over the handling of the consumption tax, economists are questioning opposition parties' calls for cutting or eliminating the tax, especially in its links to the social security system.

"The consumption tax should be used for financing pension, welfare and other social security programs. I wonder what could be an alternative source of funding," Norinchukin's Minami said.

Minami said he is not sure whether relying too much on government bonds is a good idea in terms of Japan's fiscal health, and that once the rate is lowered, it would require tremendous political capital to raise it again.

While both ruling and opposition parties promise to raise wages, they are divided on details.

Kishida has advocated an "investment in people" package of 400 billion yen over three years so workers can acquire digital and other skills necessary for the 21st century. But Mizuho's Sakai believes it is not enough when considering how wages grow in other developed nations.

From a medium- and long-term perspective, the government must tackle structural issues, such as low wage growth and high dependency on overseas energy, because it cannot continue "bandage" measures forever to stop the bleeding by handing out cash and subsidies, he said.

In a bid to reduce dependency on fossil fuel for energy sources, Sakai urged the ruling and opposition parties to present specific measures for households to introduce electric vehicles and other eco-friendly goods, as well as for businesses to increase capital spending that would result in significant energy saving.

Japan core CPI up 2.1% in May, above BOJ's inflation target again