The final budget report for the Tokyo Games, postponed for a year from the summer of 2020 due to the COVID-19 pandemic, was presented at the organizers' board meeting along with the games' 800-page official report submitted to the International Olympic Committee. 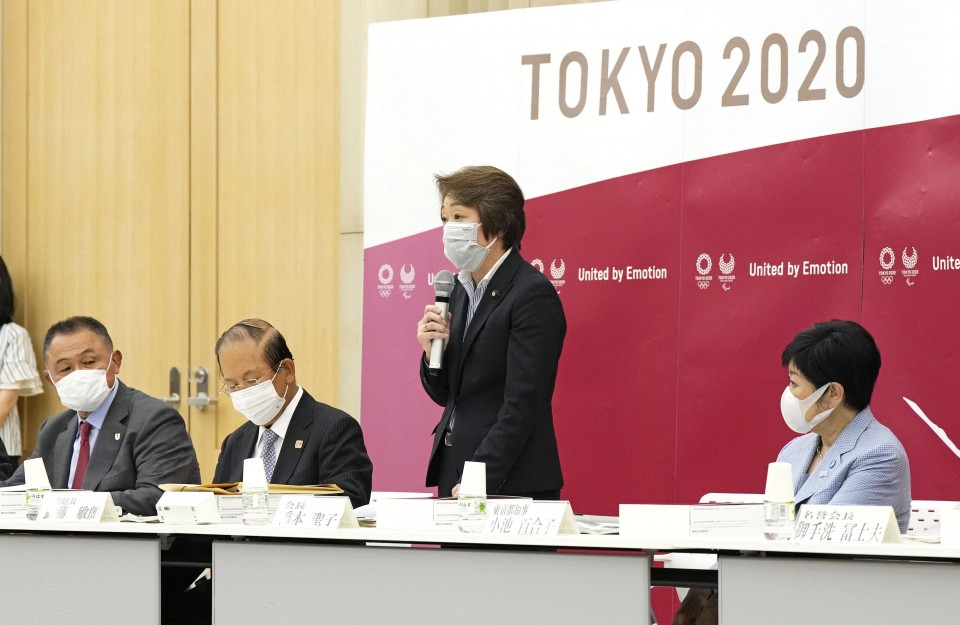 Seiko Hashimoto (2nd from R), president of the Tokyo Olympic and Paralympic organizing committee, speaks at a meeting of the committee's board of directors in Tokyo on June 21, 2022. (Kyodo)

While the postponement and coronavirus countermeasures caused additional costs, streamlining efforts kept the total within the 1.5 trillion yen quoted by the organizing committee in its 2016 preliminary planning.

The cost was 29 billion yen lower than the amount forecast in December due to some of the venues' restoration work costing less than expected, along with other reasons, according to the organizers.

Venue-related costs such as the reconstruction of the National Stadium accounted for 865 billion yen, while operational costs including transport and security totaled 524 billion yen.

The cost for the coronavirus countermeasures stood at 38 billion yen.

The organizers' official report handed to the IOC said "prioritizing the ensured safety and security" amid the pandemic resulted in most venues having no spectators.

But it allowed for the Tokyo Games to fulfill its "responsibility" in "hosting and passing on the Olympics and Paralympics that cities across countries have over the generations."

"It is a mission of everyone who was involved in the games to inherit its legacy to next generations," organizing committee president Seiko Hashimoto said at the start of the meeting.

Hashimoto stated she will "keep speaking out" on the legacy, which she claimed as having the awareness toward ideas such as a sustainable and inclusive society, diversity and harmonization, as she looks to lead Sapporo's bid to host the 2030 Winter Games.

"We can't raise the support rate from the people of Sapporo and Hokkaido unless we succeed in conveying the significance and value of the Tokyo Games. It's important to explain (the 2030 Games) as an investment for the future," she said.

"I could do the job because of what Mr. Mori had built before. I'm still grateful," said Hashimoto, who was the Olympic minister before abruptly named the organizers' head five months before the games.

The report said the hosting of the games under the unprecedented backdrop of a pandemic accentuated the origin of sports, such as aspiration for peace, while the difficult decision to go ahead with virtually no spectators helped stem the flow of people and spread of the virus.

The introduction of urban sports such as skateboarding provided an appeal to youth, it said, with the games also serving as an opportunity to show the world northeastern Japan's recovery following the devastating 2011 earthquake, tsunami and nuclear disaster.

The report also touched on the drastic change within the organizing committee's operation triggered by an opaque logo selection process which left them requiring a new open competition with a more thorough vetting process.

The organizers said they turned over the knowledge they earned from the Tokyo Games to the 2024 Paris Games organizers in May, when they also made games reform proposals such as a shorter preparation period and fewer stakeholders attending to alleviate the burdens for the hosting cities.

The organizing committee, set to be dissolved at the end of this month, had the highest domestic sponsorship revenue of 376 billion yen, with 50 billion yen insurance also received following the one-year postponement.

But the expected 90 billion yen from ticket revenues vanished with spectators banned from most stadiums, with the organizers pocketing just 400 million yen. The metropolitan government essentially covered some of the venue-related costs to stop the organizers from falling into the red.

The organizers have set aside 14.4 billion yen to settle unexpected issues such as lawsuits.

A total of 11,420 athletes took part in the Tokyo Olympics and a record-high 4,403 at the Paralympics, the organizers said.