The United Nations on Thursday called for urgent funding to assist people affected by a magnitude 5.9 earthquake that struck Afghanistan a day earlier and killed hundreds of people.

At least 755 people have been killed and nearly 1,500 injured in the Paktika and Khost provinces of eastern Afghanistan, according to the U.N. Office for the Coordination of Humanitarian Affairs. The death toll is expected to rise further. 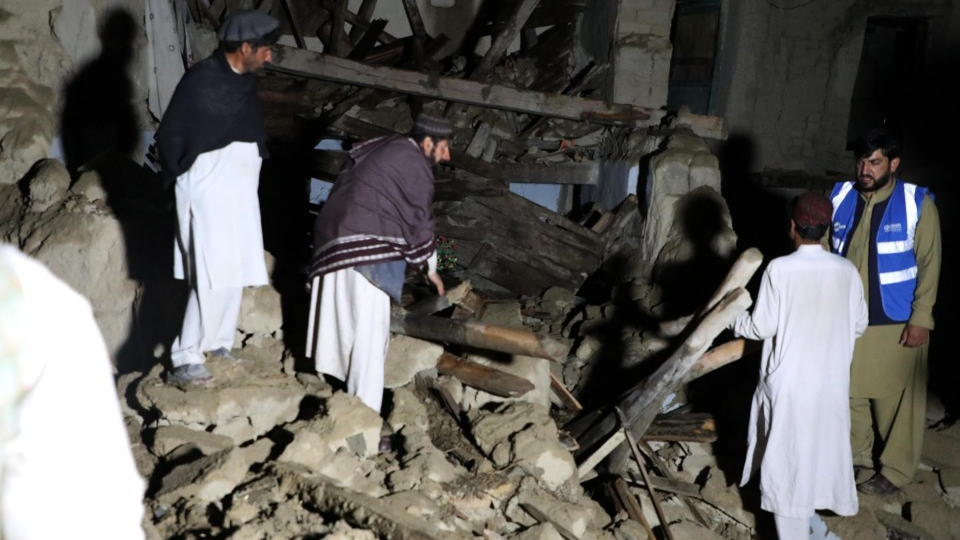 Search and rescue operations continue in Paktika, Afghanistan, on June 22, 2022, after a strong earthquake struck the country's east. (Anadolu Agency/Getty/Kyodo)

Some 1,500 homes were destroyed or damaged in the Giyan district of Paktika province, and the supply of 1,000 available emergency tents is running short.

"Yesterday was yet another tragic reminder of the myriad dangers facing the Afghan people at this time," Ramiz Alakbarov, Deputy Special Representative focusing on development and humanitarian assistance, said in remarks to the Security Council on the humanitarian situation in the Central Asian country.

In a statement released Wednesday, U.N. Secretary General Antonio Guterres said, "We count on the international community to help support the hundreds of families hit by this latest disaster. Now is the time for solidarity."

The Office for the Coordination of Humanitarian Affairs has deployed its assessment teams to the affected areas.

The earthquake occurred at a time when Afghanistan is experiencing its worst drought in almost 30 years, impacting crop production. Some 19 million people, or roughly half of the country's population, are considered food insecure, with 6.6 million at emergency levels.

The risk of a cholera outbreak is a particular concern in the south-eastern part of the country where the temblor occurred, Guterres' spokesperson said. Around 500,000 cases of acute watery diarrhea have been confirmed across Afghanistan, and U.N. officials fear cases could rise.

"With destruction of this scale plus rain and lack of sanitation (it) could lead to the outbreak of a disease that could be a waterborne disease, and that would be a very, very unwelcome scenario," said Ramiz Alakbarov, U.N. resident and humanitarian coordinator for Afghanistan.

Only one-third of the resources requested for this year's humanitarian response to Afghanistan has been received, a shortfall of approximately $2 billion.

"Without intervention -- funding, humanitarian assistance and basic services -- we will have another winter of discontent and a winter of trouble and a winter of pain for the people of Afghanistan," warned Martin Griffiths, the U.N. Emergency Relief Coordinator.