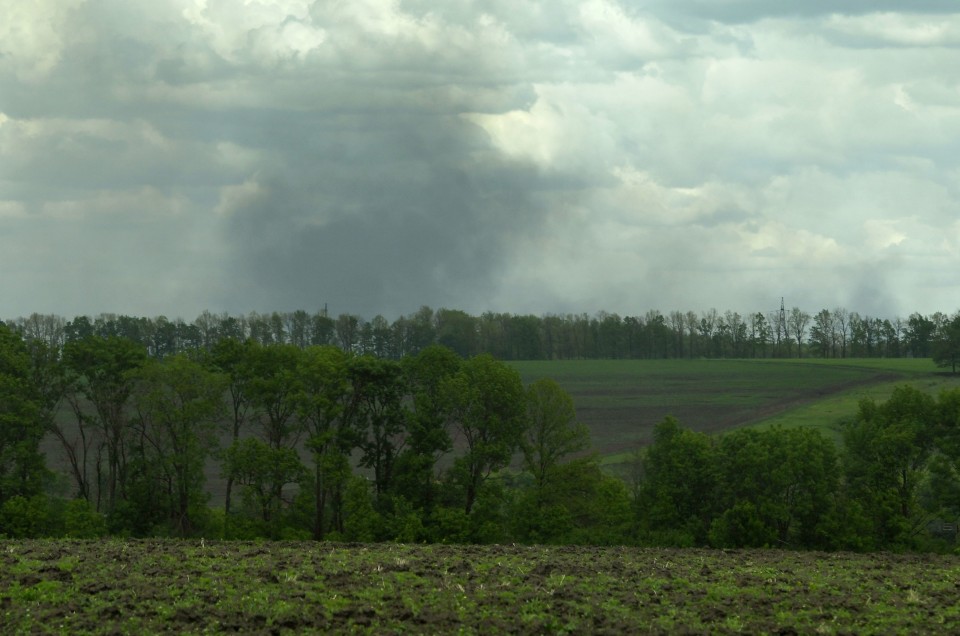 Black smoke rises in the Kharkiv region in eastern Ukraine near the border with Russia on May 18, 2022, amid Russia's invasion of the country. (Kyodo) ==Kyodo

TOKYO - Japan will double the cap on overseas arrivals to 20,000 people per day starting next month as it continues to ease border controls triggered by the coronavirus pandemic, the top government spokesman said Friday.

The government will also ease COVID-19 testing and quarantine rules for people arriving in Japan, dividing countries and regions into three groups according to the infection situation.

BONN, Germany - Finance chiefs from the Group of Seven major developed countries are expected to agree to step up sanctions pressure on Russia over its invasion of Ukraine as they wrap up their two-day meeting on Friday.

The group's finance ministers and central bankers are also set to include in their communique a pledge to provide Ukraine with further financial support after discussions in Koenigswinter, near the German city of Bonn.

BEIJING - China's central bank cut its benchmark lending rate for mortgages on Friday, its second reduction this year, as the Communist-led government's radical "zero-COVID" policy weighs on the housing and real estate sectors.

The two also confirmed that they will meet in person as soon as possible, the Japanese Foreign Ministry said in a press release issued after their 15-minute phone talks.

TAIPEI - Taiwan President Tsai Ing-wen marked the second anniversary of her inauguration since her re-election in 2020 with a low-key activity on Friday, as the island has faced steep increases in COVID-19 infections.

Tsai visited a community activity center in Taoyuan, northwestern Taiwan, to inspect how local governments have been dealing with the spread of the Omicron variant of COVID-19, which has caused an alarming spike in cases since last month.

TOKYO - Nissan Motor Co. said Friday it will launch a new electric minivehicle co-developed with Mitsubishi Motors Corp. this summer as the two automakers aim to boost their share of the domestic market for popular lightweight cars.

Nissan and its partner Mitsubishi Motors jointly developed the new EV, to be sold under their respective brand names, to lower production costs and make a more affordable addition to their lineup of minivehicles, which offer tax advantages to consumers.

BEIJING - North Korea on Friday reported more than 263,000 new fever cases, bringing the total number to over 2.24 million for the past three weeks, amid the spread of the novel coronavirus in the country of 25 million.

Two more deaths were reported in the 24 hours through 6 p.m. Thursday, with the accumulated number of deaths since late April standing at 65, according to the state-run Korean Central News Agency.

SAPPORO - Deepwater divers wound up their two-day search inside a sunken tourist boat off Hokkaido on Friday, finding no trace of the 12 people still missing after the accident in late April, the Japan Coast Guard said.

The transport ministry is now planning to start work as early as Saturday to salvage the 19-ton Kazu I, which currently sits on the seabed some 120 meters below the surface, officials said.

Big manufacturers' sentiment falls to 9 from 14 in June: Bank of Japan