The Japanese government will draw up a five-year plan by the end of this year to support startups and eyes increasing investments for their promotion by 10 times as part of its innovation drive, a draft growth strategy by a Cabinet task force showed Tuesday.

The task force discussing how to realize a new form of capitalism, a concept advocated by Prime Minister Fumio Kishida for fairer wealth distribution, will consider 14 measures including expanding investments to venture capital firms such as through state-owned Japan Investment Corp., according to the draft. 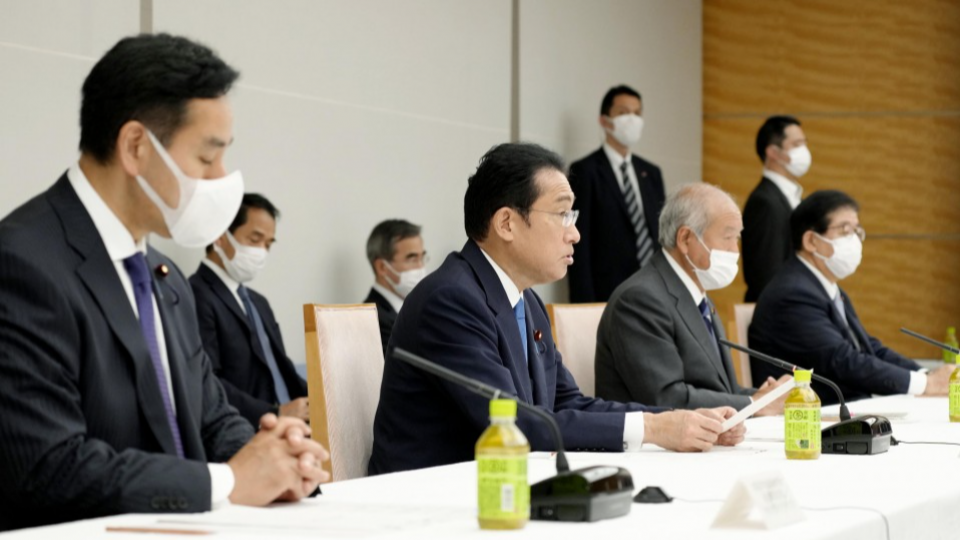 Japanese Prime Minister Fumio Kishida (2nd from L) speaks at a meeting of the government's Council on Economic and Fiscal Policy in Tokyo on May 31, 2022. (Kyodo)

It will also consider a way of utilizing the Government Pension Investment Fund. In 2021, the government invested about 800 billion yen ($6.2 billion) to promote emerging companies.

The plan of boosting investments in startups is one of the four key pillars of intensive investment in overall strategy to realize the new capitalism concept. The other focal areas are human resources, science, technology and innovation, and green and digital technology.

While Kishida has promoted aggressive wage hikes, the draft strategy also stipulated that the government will compile by the end of 2022 a plan to prompt more individuals to shift their money to investments from savings to double the household asset incomes.

More than half of the Japanese household assets are cash and deposits. The envisaged plan includes considering a "drastic revision" of a small-lot, tax-advantaged investment program known as NISA, or the Nippon Individual Savings Account.

Other key measures in the four fields include plans such as requiring companies to disclose gender pay gaps as well as the government issuing so-called transition bonds, which are typically used to fund environment-related projects.

The essence of the draft strategy was included in an annual draft fiscal and economic policy guideline, expected to be approved by the Cabinet on June 7. The blueprint will be reflected in drafting the state budget for fiscal 2023.

On the government's target of restoring its fiscal consolidation in fiscal 2025, the guideline, also put together on Tuesday, said it will "continue to work toward the goal." Japan's fiscal health is already the worst among major developed countries.

But it fell short of stating the target year the government has said it will stick to. It also added that a "necessary review" over the target will be conducted depending on the global and domestic economic situation.

The guideline also noted that the country will "radically strengthen" its defense capability on the back of an increasingly severe security environment.

It cited the intensifying confrontation between the United States and China, Russia's invasion of Ukraine as well as growing threats in the Indo-Pacific, in a veiled reference to Beijing's increasing assertiveness in the region.