The raising of the 19-ton Kazu I will now take place possibly Tuesday. The boat, which currently sits on the seabed some 120 meters below the surface, went missing off the Shiretoko Peninsula on April 23. 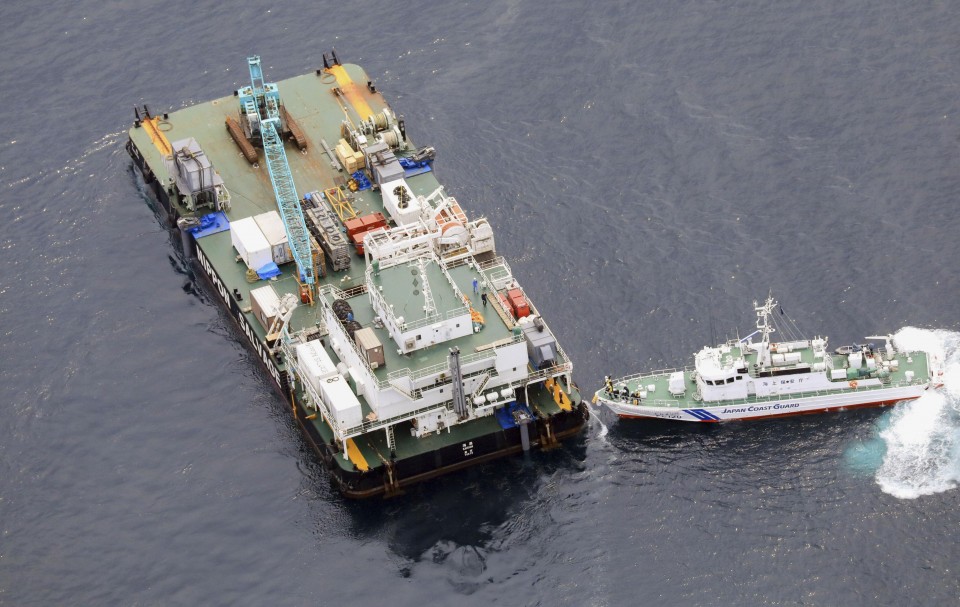 Photo taken from a Kyodo News helicopter on May 19, 2022, shows the Kaishin barge at the site of a tour boat that sank off the Shiretoko Peninsula on Japan's northernmost main island of Hokkaido on April 23. Seen on the right is a Japan Coast Guard patrol ship. (Kyodo)

Following a two-day search for bodies inside the boat through Friday, divers from Nippon Salvage Co. checked to ensure the boat can be raised safely, according to the Japan Coast Guard.

The private company was hired by the coast guard and will work with the transport ministry to salvage the boat. The whole operation is set to cost around 140 million yen ($1 million).

Poor weather is forecast, so the next phase will not begin until Tuesday at the earliest. This will see the vessel lifted around 10 to 20 meters before it is towed to shallow water. A crane will then be used to lift Kazu I and put it on a barge, which will then transport it to a nearby port.

The coast guard has continued its search of the area with aircraft and patrol boats.

Two bodies, possibly of the missing, have been found washed up on Kunashiri Island, one of the islands controlled by Russia and claimed by Japan near Hokkaido, according to the coast guard.

A Japanese driver's license was found close to a body leading authorities to suspect it could be a 27-year-old deckhand, the coast guard said Saturday. The body of a woman was discovered on May 6.