Slovakia will keep providing military support to Ukraine in its fight against Russia out of shared values of democracy and freedom, according to the NATO member's Prime Minister Eduard Heger.

Speaking in an interview Friday in Bratislava, Heger said Slovakia would "swiftly respond" to Ukrainian requests for MiG-29 fighter aircraft and that the two governments are in the final stage of talks to deliver howitzer artillery guns to the war-torn country.

Heger condemned Russia's aggression in Ukraine, saying, "The whole world changed" from a "brutal war" and that the North Atlantic Treaty Organization's eastern flank has "immediately become an important symbol of this new era." 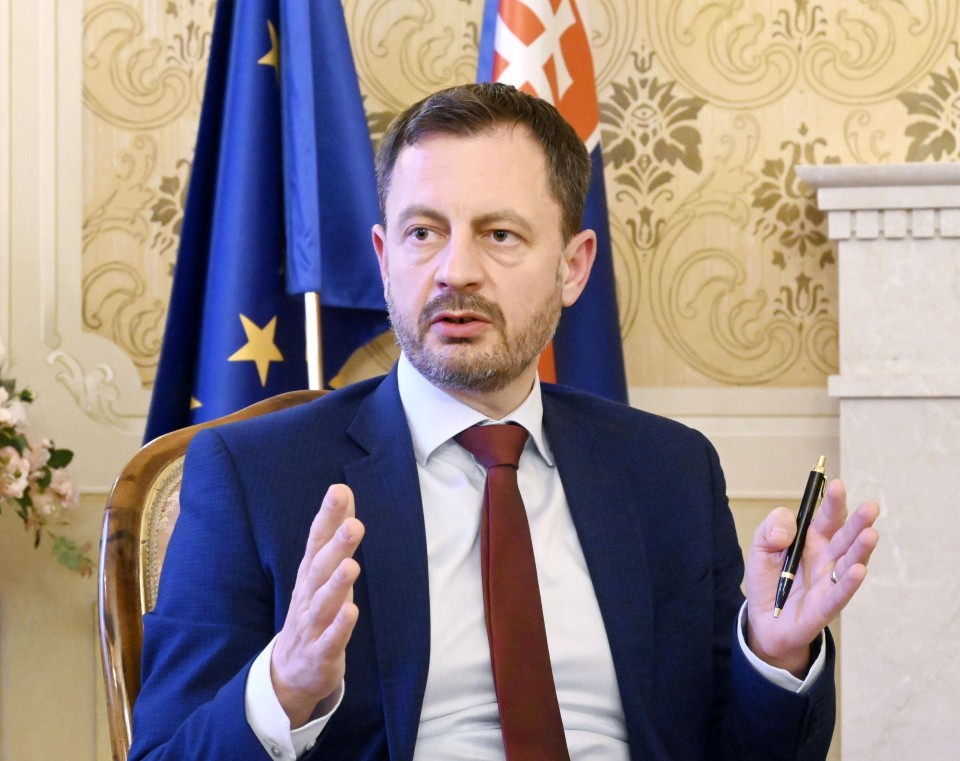 Slovakian Prime Minister Eduard Heger is pictured during an interview in Bratislava on May 6, 2022. (Kyodo)

Slovakia has provided Ukraine with its S-300 anti-air defense system and copious ammunition while also helping to repair its Eastern European neighbor's heavy vehicles, according to Heger.

Bratislava is helping Kyiv because "they are really a democratic country, and they are trying to defend the values we live as well," he said. "They are fighting also for our freedom, for our values."

In exchange for handing over its S-300 system, Slovakia received four batteries of Patriot missile systems from the United States, Germany and the Netherlands.

"With this brutal war and seeing what Russia is capable to do, we understand that we have to protect the whole territory," Heger said. "One thing is to have a strong eastern flank so that in case of an attack, we are able to bounce it off."

The prime minister expressed determination to reduce Slovakia's dependence on Russian oil and gas, saying Europe is under a "hybrid economic war of Russia toward the EU."

Citing Russia's threat to cut off energy supplies to European countries, he said, "(President Vladimir) Putin wants to divide our unity. And it is very important that we stay united in every subject of the relationship towards Russia."

"We want to find, as quick as possible, alternatives for the Russian gas and oil," he said.

Touching on Slovakia's deepening ties with Taiwan, Heger said his country employs a one-China policy but has a "very pragmatic relationship" with Taipei, especially in the economic realm.

Heger voiced an eagerness to strengthen political ties with Taiwan, as well.

Taiwan is a democracy under democratic principles, he said. "On those values, we would like to have the relationship with them."