Japan is keeping a close watch on the Chinese navy's activities in waters around the nation after fighter jets and helicopters were seen taking off from and landing on a Chinese aircraft carrier off the southwestern prefecture of Okinawa, the top government spokesman said Monday.

The activities could be part of China's efforts to bolster its joint aerial and maritime operational capabilities in the Pacific, and Japan will continue to take heed of the situation and keep up surveillance at sea and in the air, Chief Cabinet Secretary Hirokazu Matsuno told a press briefing. 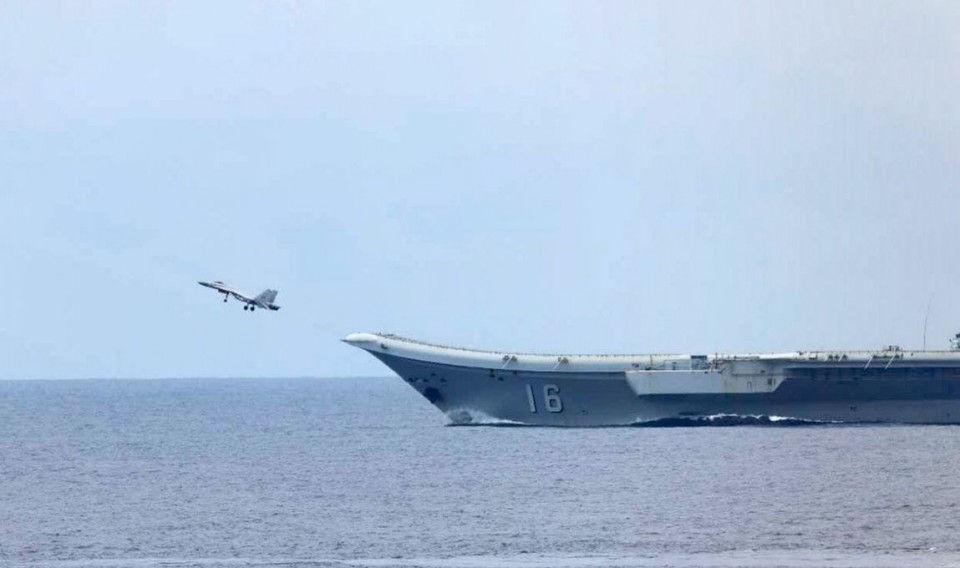 Chinese aircraft carrier Liaoning is pictured in the Pacific Ocean to the south of Okinawa Prefecture on May 7, 2022. (Photo courtesy of Japan's Defense Ministry)(Kyodo)

The Chinese navy's flotilla of the aircraft carrier Liaoning, missile destroyers and a supply ship sailed through waters between the prefecture's main island of Okinawa and Miyako Island last week. Japan's Maritime Self-Defense Force dispatched its Izumo helicopter carrier there for surveillance.

The aircraft carrier was in waters about 160 kilometers south of Ishigaki Island in the prefecture on Sunday, the Defense Ministry said, adding that fighter jets and helicopters were spotted taking off from and landing on the Liaoning for the sixth straight day.

"The government will continue to watch moves by the Chinese military in waters around Japan," Matsuno said.

China has been making assertive moves at sea in an apparent display of its strength, keeping Japanese authorities on alert against unilateral attempts to change the status quo by force.

Japan has expressed concern about the ramifications of Russia's invasion of Ukraine for the Indo-Pacific region.

In a separate move, Japan on Monday lodged a protest with China over the intrusion earlier in the day of two China Coast Guard ships into Japanese territorial waters around the Senkaku Islands in the East China Sea. The uninhabited islets are controlled by Japan but claimed by China, which calls them the Diaoyu.

"It is totally regrettable and intolerable that China's coast guard ships have entered territorial waters around the Senkaku Islands," Matsuno said.

"Such activities violate international law in the first place. We have lodged a protest through diplomatic channels and strongly urged them to leave the territorial waters swiftly," he added.