Yokozuna Terunofuji suffered his second defeat of the Summer Grand Sumo Tournament on Friday as Bulgarian No. 11 maegashira Aoiyama took the sole lead with a 6-0 record.

Mongolian-born Terunofuji (4-2) lost for the third straight meet to veteran Mongolian No. 3 Tamawashi (5-1). The yokozuna pulled out of March's Spring meet hurt and is looking far from his best with recurring knee issues.

Terunofuji showed none of his usual tenacity in a surprisingly one-sided bout, ushered over the straw bales in a matter of seconds at Ryogoku Kokugikan as his title chase suffered a damaging defeat.

Former sekiwake Aoiyama, meanwhile, showed the gulf in experience between him and No. 15 Ichiyamamoto (5-1) in a clash between the only unbeaten makuuchi-division wrestlers. 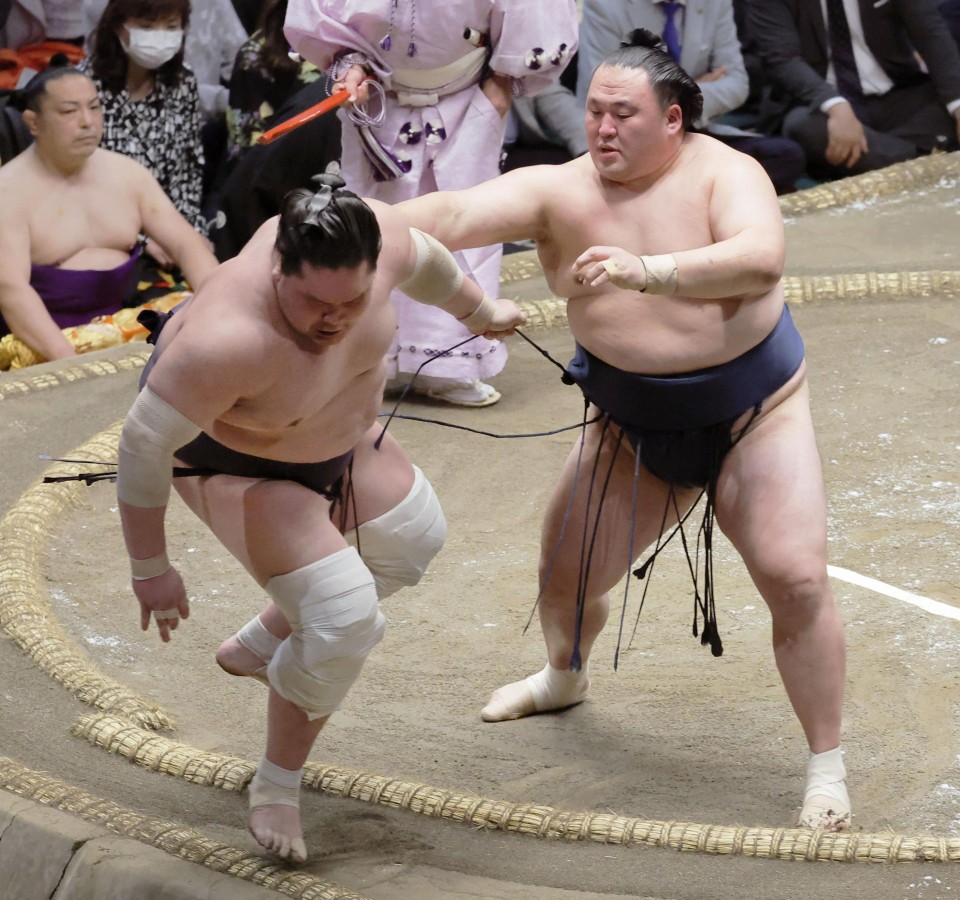 Tamawashi (R) defeats Terunofuji on the sixth day of the Summer Grand Sumo Tournament on May 13, 2022, at Tokyo's Ryogoku Kokugikan. (Kyodo)

Boasting superior physicality, 35-year-old Aoiyama steadily forced Ichiyamamoto toward the edge before timing his slap down to perfection, sending the 28-year-old -- promoted to makuuchi only last year -- to the sandy surface.

"I could get myself on the front foot," said Aoiyama, who played down his excellent start to the 15-day meet. "It's not the first time I've done it. We aren't even halfway through yet."

Two other wrestlers trail the leader by a win.

Ozeki Mitakeumi (3-3) floored No. 3 Hokutofuji (1-5) in a blink, sidestepping off the opening charge before executing a left pulling overarm throw.

Ozeki Takakeisho (3-3), however, ended up on the wrong end of a similar bout. Sekiwake Abi (4-2) charged forward from the start before swiftly pulling down the ozeki.

Things are looking even bleaker for ozeki Shodai (1-5), his hesitant start cost him against No. 4 Takanosho (4-2).

Second best on the initial charge, Shodai was quickly bulldozed toward the edge by the former sekiwake. The ozeki's late resistance was not enough to prevent a force-out defeat as he matched his 1-5 start in March.

Sekiwake Wakatakakage (3-3) needed time but again came out on top against No. 1 Takayasu (1-5) in a rematch of their championship playoff in March.

Wakatakakage endured a difficult start but was in control once he grabbed a right overarm belt hold, getting his head on the side of Takayasu's body to keep the former ozeki in an untenable position before pushing him out from the back.

Daieisho (4-2) took a step back from the leading pack after losing a battle of komusubi to Hoshoryu (4-2). The nephew of former Mongolian grand champion Asashoryu stole Daieisho's thunder with an explosive fast attack to force him out.