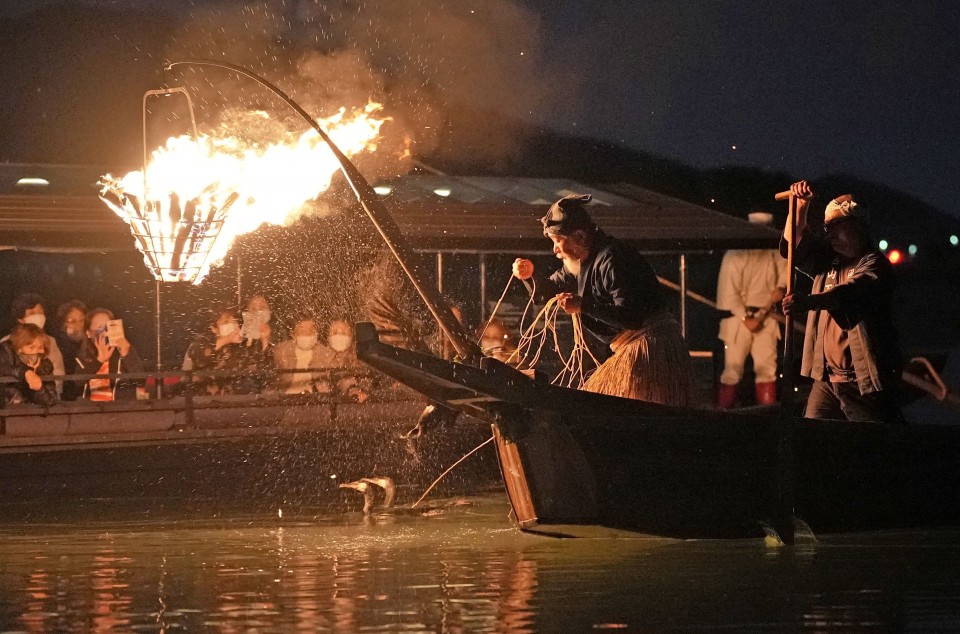 This year's "ukai" traditional cormorant fishing starts on the Nagara River in the central Japan city of Gifu on May 11, 2022. The fishing method dates back to over 1,300 years ago in the area. (Kyodo) ==Kyodo

South Korea's Joint Chiefs of Staff said North Korea launched the missiles from Pyongyang's Sunan area at around 6:29 p.m. toward the Sea of Japan.

TOKYO - SoftBank Group Corp. said Thursday it posted a net loss of 1.71 trillion yen ($13 billion) in the business year ended in March on investment losses after logging the highest profit for a Japanese company the previous year.

The result was a nosedive from the record net profit of 4.99 trillion yen in fiscal 2020, as the values of global tech firms the company invested dropped on their poor business performances amid the coronavirus pandemic.

TOKYO - The National Police Agency issued an advisory to all prefectural police forces in December to avoid questioning people in a way that could be perceived as racially motivated, according to agency officials.

The advisory came after the U.S. Embassy in Tokyo tweeted on Dec. 6 that it had received reports of "suspected racial profiling incidents" with several foreigners "detained, questioned and searched" by police.

TOKYO - Japanese Prime Minister Fumio Kishida and his EU counterparts agreed Thursday to cooperate in realizing a "free and open" Indo-Pacific as Russia's continued war in Ukraine and an increasingly assertive China have increased uncertainty in the region.

Finland says will apply for NATO membership "without delay"

In a joint statement, the Finnish leaders said that steps to join the 30-member military alliance would be taken "rapidly within the next few days," in a move that will almost certainly be opposed by Russia, with which Finland shares a land border and has long held neutral relations.

TOKYO - Asian finance chiefs on Thursday warned of the "downside risks" from Russia's invasion of Ukraine to the economic recovery of their region, even as they said they expect that their countries will emerge stronger this year from the coronavirus pandemic.

The finance ministers and central bank governors of Japan, China, South Korea and the Association of Southeast Asian Nations said in a joint statement after an online meeting that they agreed to deepen financial regional cooperation to weather the fallout from the conflict between Russia and Ukraine as well as the pandemic.

Park, who became the nation's top diplomat under newly elected President Yoon Suk Yeol, said he expects Seoul and Tokyo to find solutions to issues of history that are acceptable to both sides.

TOKYO - Japan's top uniformed officer of the Defense Ministry said Thursday that recent activities by China's navy, including fighter jets taking off and landing on an aircraft carrier near the southern prefecture of Okinawa, are "a security concern."

Gen. Koji Yamazaki, chief of the ministry's Joint Staff, aired a strong sense of caution against the activities "held in waters close to Japan" with the aim of "bolstering navigating capabilities of the aircraft carrier in the Pacific region" when speaking at a press conference in Tokyo.