Japan has no plan to pull out of two major energy projects off the Russian island of Sakhalin and the policy does not contradict the slew of sanctions it placed on Moscow over its invasion of Ukraine, a senior government official said Sunday.

"If we give up our stakes and Russia gets them," Deputy Chief Cabinet Secretary Seiji Kihara said on an NHK television, energy imports could be "more costly" for Japan in the long term. 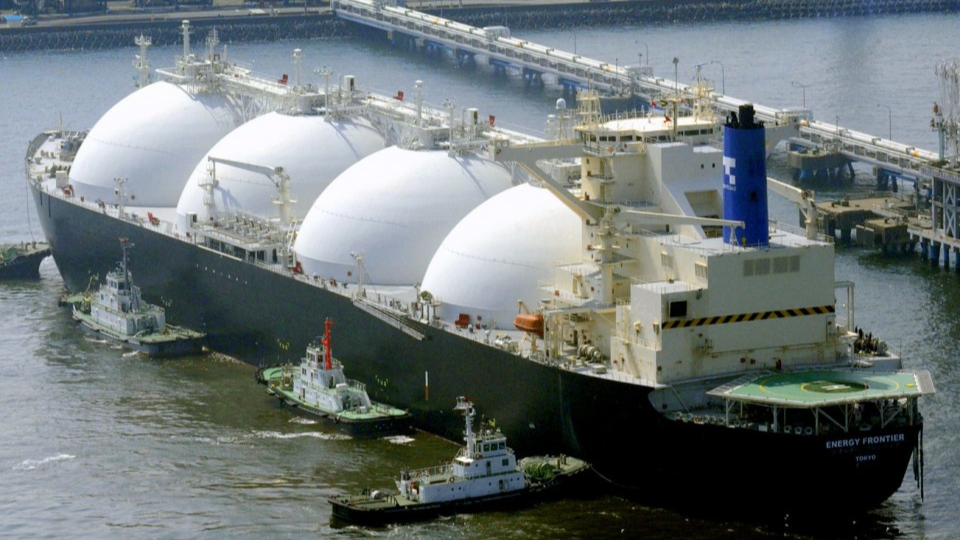 File photo shows a liquefied natural gas tanker in waters off Sodegaura, Chiba Prefecture, in April 2009, which arrived from Sakhalin island under the Sakhalin 2 project. (Kyodo)

He also said if Japan's stakes in the Sakhalin 1 and 2 oil and liquefied natural gas projects are obtained by other countries, there is a possibility that those not imposing sanctions against Russia will benefit.

But Kishida has noted the projects on Sakhalin, a large island north of the Japanese archipelago, are important in terms of energy security.

Asked about the likelihood of Japan tightening its sanctions against Russia by phasing out or banning LNG imports from the resource-rich country, Kihara said the government will "think about how to deal with it when it becomes necessary" in light of the unity of the G-7, including Britain, Germany and the United States.

Industry minister Koichi Hagiuda, however, has suggested it would be challenging for Japan and European countries to ban Russian LNG imports in the near future unless alternative suppliers can be found.

In 2021, Russian exports made up over 40 percent of the LNG consumed in the European Union, while resource-poor Japan relied on Russia for about 9 percent of its total LNG imports.

Foreign ministers from the G-7 released a statement on Saturday saying that they are poised to roll out additional sanctions on Russia amid its war on Ukraine that has now lasted nearly three months.

"We reaffirm our determination to further increase economic and political pressure on Russia, continuing to act in unity," the ministers said after a meeting in Weissenhaus in northern Germany.