Japan and Thailand signed an agreement Monday enabling the mutual transfer of defense equipment and technology, deepening their bilateral security cooperation amid the growing clout of an assertive China in the Indo-Pacific region.

Japanese Prime Minister Fumio Kishida and Thai Prime Minister Prayut Chan-o-cha also agreed during their summit to work closely in extending humanitarian assistance to Ukraine and its neighbors as Russia's invasion since February has sent over 5.5 million people fleeing the war-torn country.

To help Thailand recover from the COVID-19 pandemic fallout, Kishida announced that Japan will extend around 50 billion yen ($385 million) in loans and 500 million yen in grant aid to strengthen the quarantine regime in the Southeast Asian nation, a hub of Japanese corporate activities in the region. 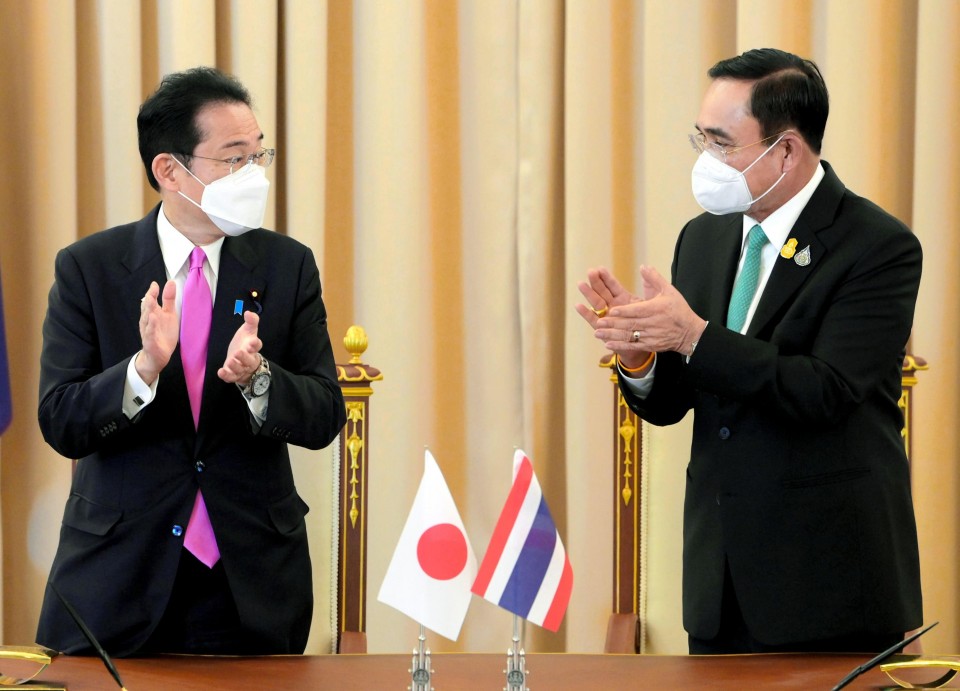 Japanese Prime Minister Fumio Kishida (L) and Thai Prime Minister Prayut Chan-o-cha clap during a signing ceremony in Bangkok on May 2, 2022, for the two countries' agreement enabling the transfer of defense equipment and technology between them. (Pool photo)(Kyodo) ==Kyodo

Japan has been deepening ties with members of the Association of Southeast Asian Nations as it seeks to promote its vision of a "free and open" Indo-Pacific region to counter China's growing influence. During the summit, the two leaders agreed to continue coordination to realize that goal.

"The signing of our defense equipment and technology transfer agreement is a major step forward in expanding bilateral defense cooperation," Kishida said in a joint press appearance with Prayut. Japan and Thailand will decide on specific equipment for transfer from now, he added.

Prayut expressed hope that the just-signed pact will "help promote Japanese investment in the Thai defense industry," adding that the two leaders agreed on the need for bilateral relations to be elevated to "comprehensive strategic partners."

Japan already has such deals with other ASEAN members, including the Philippines, Vietnam, Malaysia and Indonesia. 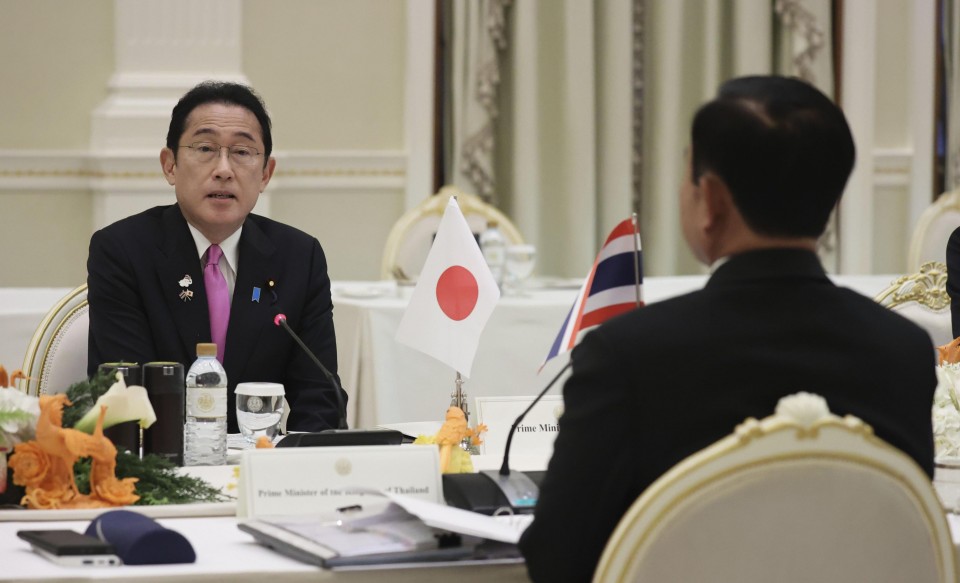 Thailand is the third Southeast Asian country after Indonesia and Vietnam in Kishida's tour of the region as he seeks to coordinate efforts with his counterparts in responding to the crisis in Ukraine.

"Prime Minister Prayut and I agreed that we will never tolerate any infringement of sovereignty and territorial integrity in any region, any attempts to change the status quo by force, and we are opposed to the threat by or use of weapons of mass destruction," Kishida said.

Southeast Asian countries, including Thailand, have been cautious about joining efforts led mainly by Group of Seven nations to isolate Russia economically and diplomatically in response to its aggression.

Thailand is the chair of the Asia-Pacific Economic Cooperation forum this year, which Russia is also a member of, apparently contributing to Bangkok's neutral stance toward Moscow and its invasion of Ukraine.

Thailand last month abstained in a vote to suspend Russia from the U.N. Human Rights Council. 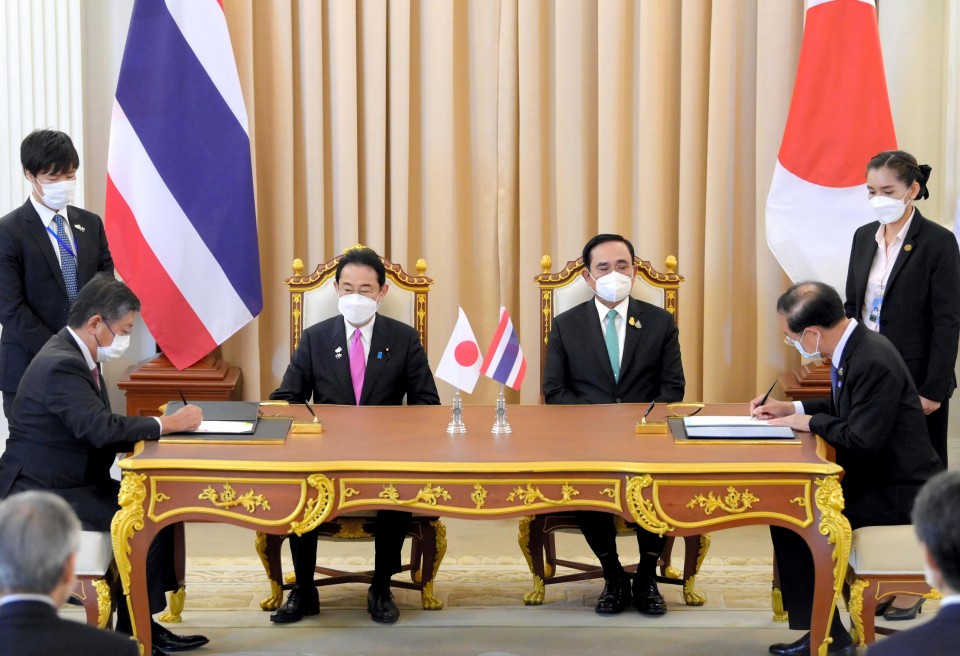 Japanese Prime Minister Fumio Kishida (C, L) and Thai Prime Minister Prayut Chan-o-cha attend a signing ceremony in Bangkok on May 2, 2022, for the two countries' agreement enabling the transfer of defense equipment and technology between them. (Pool photo)(Kyodo) ==Kyodo

Kishida has stressed the need to keep communicating with other Asian nations that "cannot take the same action" as the G-7, including Japan and the United States. The G-7 has imposed a slew of sanctions to punish Moscow.

In Indonesia, Kishida and President Joko Widodo agreed Friday on the importance of upholding a rules-based order amid the Russian aggression in Ukraine.

But the Indonesian president did not single out Russia to criticize in a joint press appearance.

Vietnam, which announced humanitarian assistance to Ukraine through international organizations, has also relied on Russia for military equipment.

In Monday's summit, Kishida and Prayut also agreed to coordinate closely over regional issues, including the situation in Myanmar following a coup in 2021 and North Korea's missile and nuclear development.

Kishida's eight-day trip through Friday will also take him to Italy and Britain.