Okinawa Prefecture has called on the central government to scrap a plan to relocate a U.S. air base within the southern Japanese prefecture in its new proposals for creating a "peaceful and prosperous" future released Saturday ahead of the 50th anniversary of its reversion to Japan later this month.

The proposals also request a drastic review of the Japan-U.S. Status of Forces Agreement, as Okinawa hosts the bulk of U.S. military installations in Japan, and a spate of crimes and accidents involving U.S. soldiers and base personnel have angered residents. They view the agreement as overly protective of U.S. service members and civilian base workers if they are implicated in crimes.

The Japanese government plans to move U.S. Marine Corps Air Station Futenma from a crowded residential area of Ginowan to the less populated coastal zone of Henoko, both in Okinawa, as agreed on with the U.S. government in 1996. 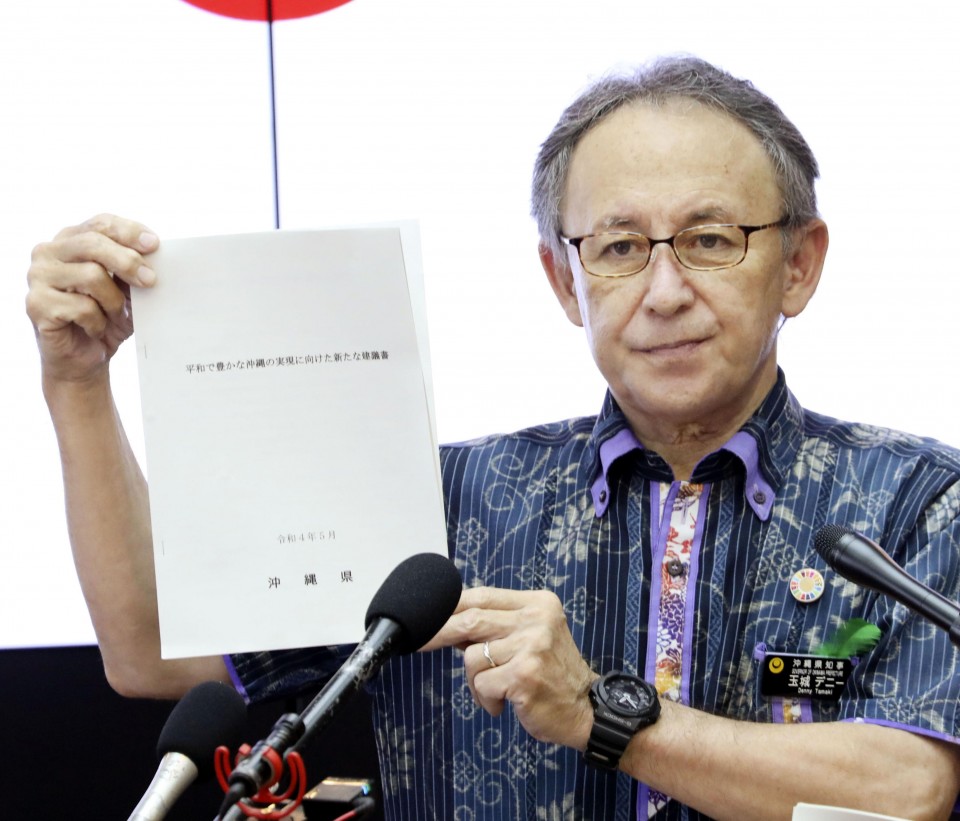 Okinawa Gov. Denny Tamaki holds up a copy of new proposals for a peaceful and prosperous Okinawa at a press conference in Naha on May 7, 2022. (Kyodo)

Japan's security policy relies "too heavily" on Okinawa, Gov. Denny Tamaki said at a press conference on the proposals on "realizing a peaceful and prosperous Okinawa" prior to the anniversary on May 15.

The new documents say the prefecture hosts 70.3 percent of the land occupied by U.S. military bases in Japan, up from 58.8 percent in 1972 when it was returned to Japan from U.S. control, and that the burdening in hosting the U.S. military facilities should be reduced.

As the proposals released in 1971 called for creating a peaceful island without military bases, "I want to abide by the principle that residents hoped for 50 years ago," Tamaki said.

In the prefecture's first referendum conducted in 2019 on the plan to move the Futenma base, more than 70 percent of voters rejected the plan.

But the Japanese government maintains its view that the relocation is "the only solution" for removing the dangers posed by the Futenma base without undermining the deterrence provided by the Japan-U.S. security alliance.

Given Russia's invasion of Ukraine and China's military buildup partly amid growing tensions over Taiwan, Okinawa should never become an attack target just because military bases are concentrated in the prefecture, about 600 kilometers west of Taiwan's capital Taipei, the prefectural government says in the new proposals.

Tamaki said he is seeking to present the documents to Prime Minister Fumio Kishida, the chiefs of both houses of parliament and U.S. Ambassador to Japan Rahm Emanuel as early as Tuesday.