Amateur sumo wrestlers from Ukraine visited their embassy in Tokyo on Tuesday as they vowed to do their war-hit country proud at July's World Games in the United States.

The eight-member delegation from Ukraine arrived in Japan Thursday after finding it increasingly difficult to train back home amid Russia's invasion. The wrestlers will train in western Japan's Oita and Ehime prefectures in June before flying to the event, centered around non-Olympic sports. 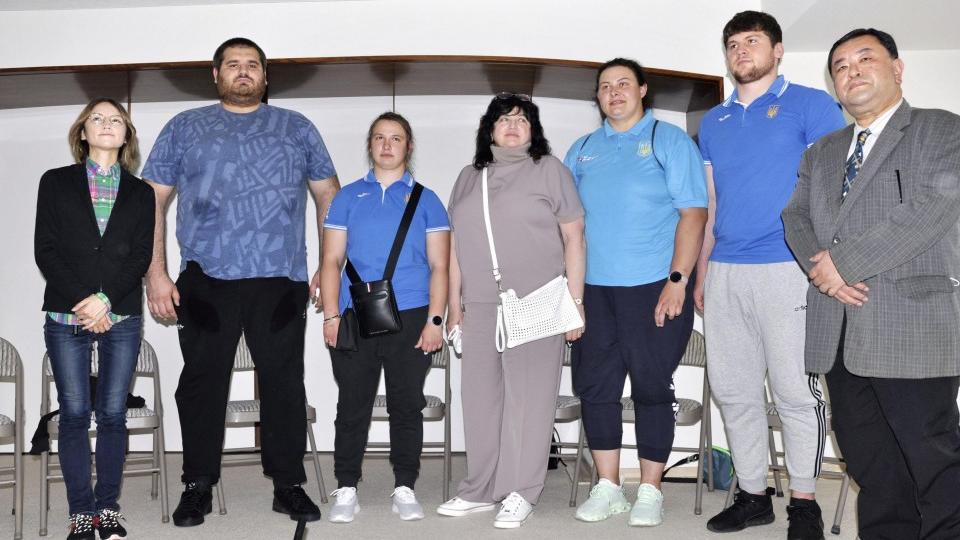 Amateur sumo wrestlers from Ukraine are pictured at the Ukrainian Embassy in Tokyo on May 31, 2022. (Kyodo)

"Now is the time to give everything I have with Ukraine facing difficulties," said 33-year-old Oleksandr Veresiuk, who came third at both the 2018 and 2019 world championships in different weight categories.

According to the team, the bombing in Kharkiv, near their training base, started soon after the Feb. 24 invasion began. In March the team asked a Japanese acquaintance for assistance in preparing for the World Games.

"I'm sure the wrestlers would have been hurt had we stayed even a day more," said 60-year-old coach Liubov Korobko.

Their first training site, Usa in Oita Prefecture, is known as the birthplace of the great yokozuna Futabayama, whose 69 straight wins in the 1930s remain a record in the ancient sport.

Seiyo, Ehime Prefecture, where the team will train from mid-June, hosts the annual Otoi tournament, the only one in Japan where amateur and professional wrestlers compete against each other and which dates back to the Edo period.

"I want to push myself at the sites where the sumo culture originated and get good results at the World Games," said 31-year-old women's wrestler Ivanna Berezovska.

About 3,000 people in Ukraine are engaged in sumo wrestling. Shishi, a 25-year-old whose real name is Serhii Sokolovskyi, is currently wrestling in pro sumo's third-tier makushita division.