The two leaders in a meeting in Tokyo confirmed bolstering semiconductor manufacturing capacity and diversification, as well as collaboration on advanced battery supply chains and resiliency of those for critical minerals.

"We were able to reach an agreement on economic security cooperation, including the development of cutting-edge semiconductors," Kishida told a joint press conference after the meeting in which, according to a joint statement, he and Biden agreed to launch a joint task force to explore the development of next-generation computer chips.

"Through such cooperation, Japan, together with the United States, will take an initiative to realize a sustainable and inclusive economic society," the premier said. 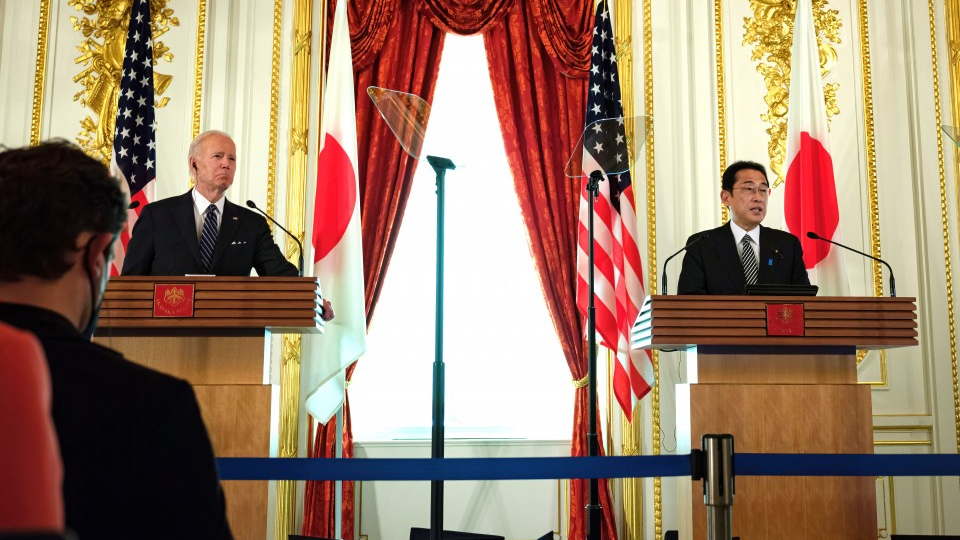 The two countries aim to build production structures in their own countries while sharing necessary components, as they recognize the importance of reducing reliance on outside nations for semiconductors, according to Japanese officials.

The two allies aim to make up ground after other economies such as Taiwan and South Korea have led semiconductor production, they said.

"Japan eyes someday building a research and development center or a production site for next-generation semiconductors that are more advanced than 2-nanometer chips," a Japanese industry ministry official said.

With the world facing a supply crunch amid the COVID-19 pandemic that has been exacerbated by Russia's invasion of Ukraine, a stable supply of chips during disruptions, such as conflicts and natural disasters, has become a matter of urgency.

Kishida also told the press conference both sides confirmed they will coordinate further and hold a ministerial-level meeting of the Japan-U.S. Economic Policy Consultative Committee in July to beef up the economic side of Japan-U.S. alliance.

As the impact of the Russian aggression also threatens stable energy supply, the issue of reducing dependence on Russian oil and gas has become a challenge for many nations.

Kishida and Biden welcomed the recent establishment of Japan-U.S. Clean Energy and Energy Security Initiative to achieve both energy security and net-zero emissions at the same time.

The initiative eyes accelerating innovation around clean energy sources such as hydrogen, while finding a role for liquefied natural gas in securing stable and sufficient energy supply. There is a move within the United States to increase natural gas production in response to global supply constraints.

The two countries are also committed to cooperate on making a full use of existing nuclear power, including collaboration on extending reactor life, as well as on advanced nuclear power technologies such as small modular reactors and fast reactors, according to the two governments.

Among the other pledges that emerged from Monday's meeting involving advanced science and technologies, the two countries will accelerate civil space cooperation, such as human and robotic lunar surface missions.

"The symbol of our space cooperation is taking off, looking toward the Moon and to Mars," Biden said at the press conference. "I look forward to the first Japanese astronaut joining us in the mission to the lunar surface under the Artemis program."

The Artemis lunar exploration project is a successor to the U.S. National Aeronautics and Space Administration's Apollo program, which sent U.S. astronauts to the lunar surface in the 1960s and 1970s.

The two partners are committed to sending a Japanese astronaut to the Gateway, a human outpost to be built in the lunar vicinity, according to the U.S. government.

As part of ongoing collaboration on a range of space science missions, Japan in November provided the United States with an asteroid sample collected by the Hayabusa2 space probe, while the United States intends to give Japan a sample from the asteroid Bennu in 2023, it said.