Shohei Ohtani delivered in the clutch Sunday for the Los Angeles Angels, setting the stage for a 5-4 walk-off win over the Washington Nationals with his game-tying two-run double.

Ohtani knotted the game at 4-4 with two outs in the ninth when he belted a sharp fly ball off Washington closer Tanner Rainey (0-1) into the base of the center field wall. 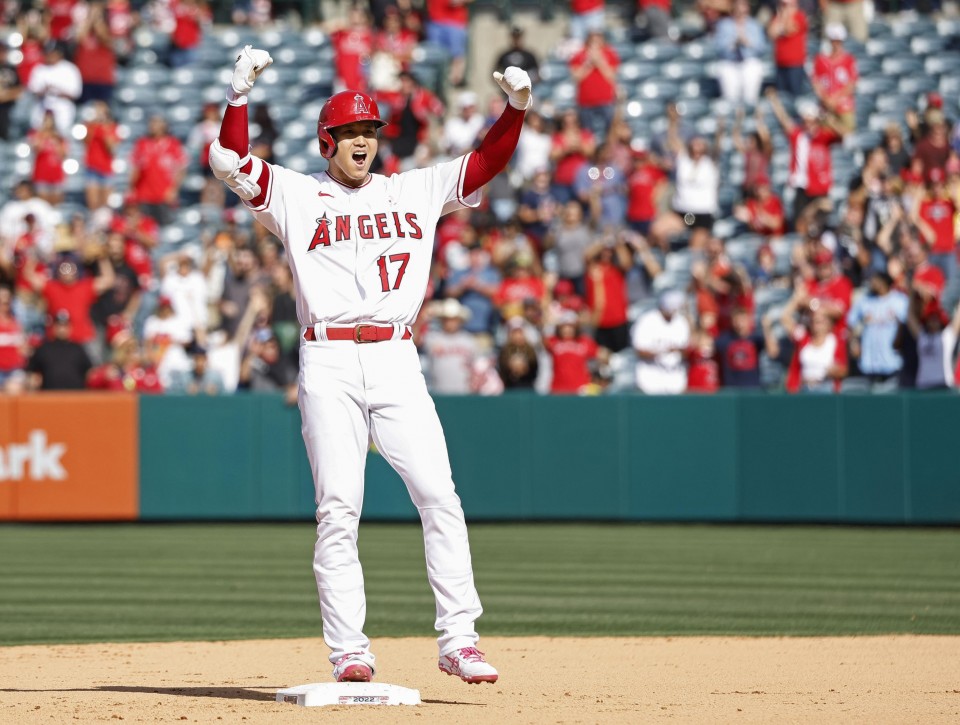 Shohei Ohtani of the Los Angeles Angels reacts after hitting a game-tying two-run double in the ninth inning of a game against the Washington Nationals in Anaheim on May 8, 2022. (Kyodo)

Anthony Rendon followed with a single to center that gave Ohtani time to sprint around from second and beat the throw home for the winning run.

The comeback gave the Angels a series win and preserved their place atop the American League West. The 19-11 Angels lead the Houston Astros by half a game.

He drove in the winning run in the Angels' 3-0 defeat of the Nationals on Friday, a day after leading his team to an 8-0 win over the Boston Red Sox with 11 strikeouts and 2-for-4 hitting in a stunning two-way performance.

"The last few games haven't felt too bad, and my hitting has felt good," said Ohtani, who displayed his impressive speed between the bags on the winning play. "(Rendon's) hit was good, so I was pretty much certain I could make it home."

Elsewhere in the majors, Hirokazu Sawamura struck out one and retired all four of his batters as first reliever for the Red Sox, who skidded to their fifth straight loss, 3-2 against the Chicago White Sox.