In a statement, the ministers from Britain, Canada, France, Germany, Italy, Japan and the United States plus the European Union "condemn in the strongest terms" Pyongyang's test-firing of an intercontinental ballistic missile last Wednesday, an act they say "undermines international peace and security." 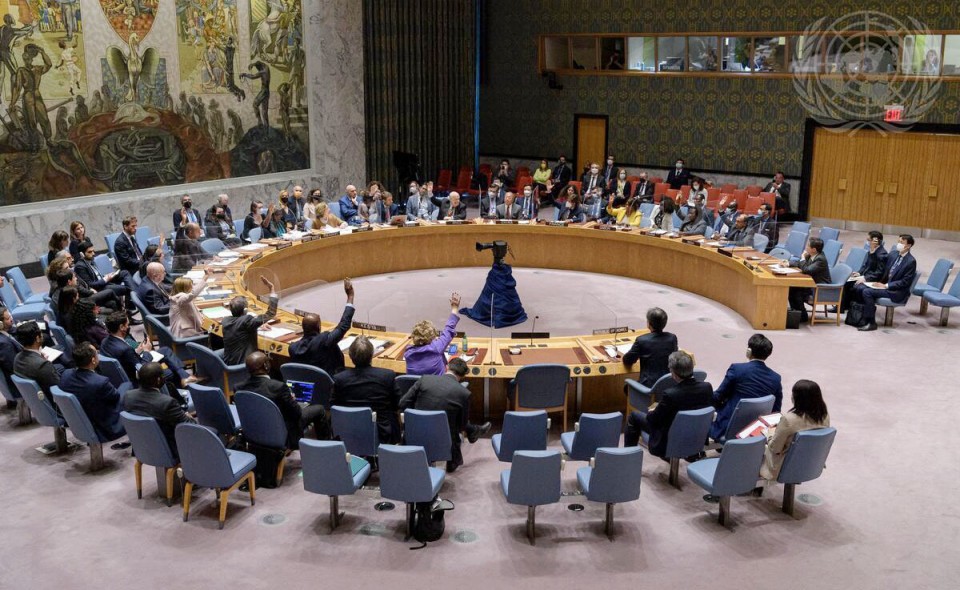 The U.N. Security Council votes on a resolution that sought to impose tougher sanctions on North Korea in New York on May 26, 2022. China and Russia vetoed the resolution. (Photo courtesy of the United Nations)(Kyodo)

It was the first rejection of a U.N. Security Council resolution aimed at preventing North Korea from developing nuclear weapons and missiles since 2006 when the first sanctions were adopted. The other 13 Security Council members voted for it.

The rejection last Thursday of the U.S.-drafted resolution came as Western nations have been adopting a more confrontational stance toward Russia since Moscow's invasion of Ukraine that began in February, which Beijing has refrained from condemning.

The G-7 ministers called on all members of the United Nations to join the seven countries in condemning North Korea's acts, since these acts require "a united response by the international community, including a united stance and further significant measures" by the Security Council.

Amid growing concerns that North Korea is preparing to conduct its first nuclear test since 2017, the reclusive nation on Wednesday last week carried out the missile tests off its eastern coast, the 16th since the beginning of this year. One of the three missiles was of intercontinental range, according to the South Korean government.

The missiles were fired in the morning after U.S. President Joe Biden finished his five-day visit to South Korea and Japan last Tuesday, his first trip to Asia since he took office in January last year.

"We are very concerned by the unprecedented series of ballistic missile tests with increasingly versatile systems across all ranges," the foreign policy chiefs said, adding that such acts by Pyongyang underscore its "determination to advance and diversify its nuclear capabilities."

The G-7 nations reiterated that North Korea should "engage in diplomacy toward denuclearization and accept the repeated offers of dialogue" by the United States, South Korea and Japan.

The draft resolution, which was distributed to Security Council members last month following North Korea's firing of an intercontinental ballistic missile in March, had included freezing the assets of the Lazarus Group, North Korea's state-sponsored hacking group, and reducing crude oil supplies to the country.