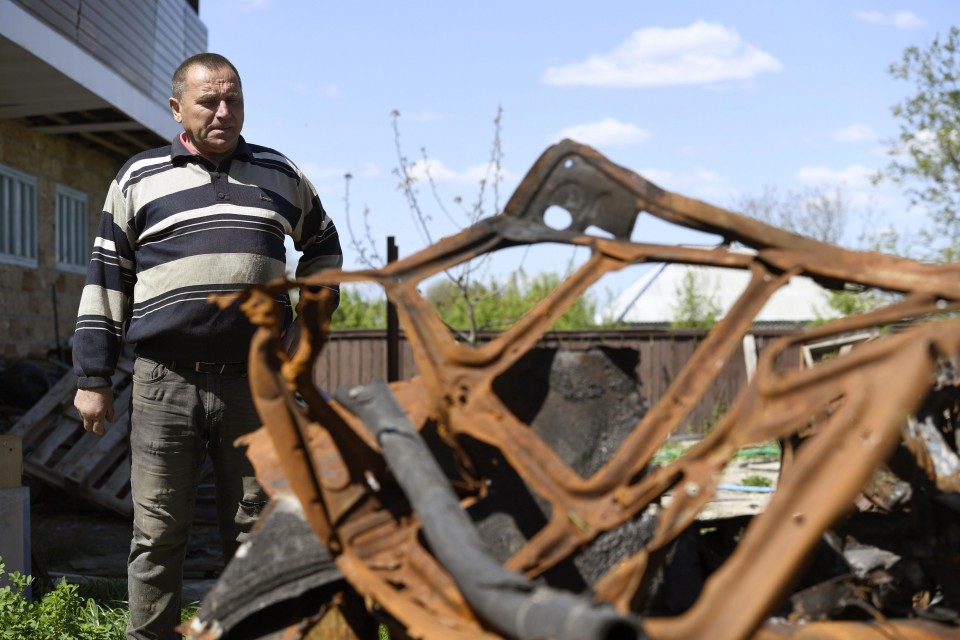 Volodymyr Yadlivka stands near a destroyed vehicle in the village of Peremoga in the Kyiv region on May 10, 2022, amid Russia's invasion of Ukraine. (Kyodo) ==Kyodo

China, which has close ties with Russia, has refrained from condemning Moscow over its invasion of Ukraine that started more than two months ago. Western nations are ramping up pressure and sanctions on Russia to end the atrocities.

TOKYO - Japan's economy in the January-March period contracted a real 0.2 percent from the previous quarter, or an annualized 1.0 percent, on sluggish private consumption and increased imports such as coronavirus vaccines, government data showed Wednesday.

Real gross domestic product, the total value of goods and services produced in the country adjusted for inflation, decreased following growth of 0.9 percent in the previous quarter, according to the preliminary data released by the Cabinet Office.

N. Korean gets money for making app for Japan firm in deceptive deals

YOKOHAMA - A North Korean IT engineer based in China has received remuneration for developing a smartphone application for a Japanese company while using the name of a South Korean national living in Japan, police said Wednesday.

The 57-year-old South Korean man who allowed the IT engineer to use his name, and a 75-year-old female relative of the engineer who acted as an intermediary for the transfer of funds, were referred to prosecutors by the police on Wednesday on suspicion of violating Japan's banking law.

Kim Tae Hyo, first deputy director of the National Security Office, said at a news conference that Seoul assesses a low probability that Pyongyang would carry out a nuclear test by the weekend, which, if it occurred, would violate U.N. Security Council resolutions.

BRUSSELS/STOCKHOLM - Finland and Sweden on Wednesday formally submitted applications to join the NATO trans-Atlantic military alliance, marking a radical change in the Nordic countries' security policy in the wake of Russia's invasion of Ukraine.

North Atlantic Treaty Organization Secretary General Jens Stoltenberg welcomed the historic move at a ceremony in Brussels. "You are our closest partners, and your membership in NATO would increase our shared security."

TOKYO - The estimated number of foreign visitors to Japan in April was down 95.2 percent from the same month in the prepandemic year of 2019 to 139,500 people, government data showed Wednesday, as the country moves toward accepting small-scale tours next week at the earliest.

The figure, though far short of the pandemic level, was more than 10 times that from a year earlier and exceeded 100,000 people for the first time since March 2020, thanks to the easing of border controls in phases due to the improved COVID-19 situation, according to the Japan National Tourism Organization.

TOKYO - Sony Group Corp. said Wednesday it plans to expand its presence in the metaverse to lay its claim in the new entertainment realm, drawing on its expertise developed in gaming and music.

The Japanese entertainment giant said at a corporate strategy briefing that it will focus on the metaverse -- an all-encompassing virtual world in which people can socialize, work and play.

YAMAGUCHI, Japan - A man in western Japan who received 46.3 million yen ($358,000) in COVID-19 relief money from his town by mistake before gambling it all away is now contrite and wants to pay it back "little by little," according to a person familiar with the case.

The 24-year-old resident of Abu in Yamaguchi Prefecture had earlier refused to return the money, and, according to this person, said he spent all the money in several overseas internet casinos.