A Japanese court ruled Monday that an order by the Tokyo metropolitan government for a restaurant chain operator to reduce business hours amid the coronavirus pandemic was illegal, finding the case did not fulfill certain conditions.

But the Tokyo District Court rejected a claim by Global-Dining Inc. that imposing blanket restrictions without offering evidence that eateries are a source of infections violates the freedom of business guaranteed under the Constitution.

The company, which runs dozens of restaurants, including a Japanese-style pub famous for its scene in Quentin Tarantino's film "Kill Bill," immediately appealed the ruling. 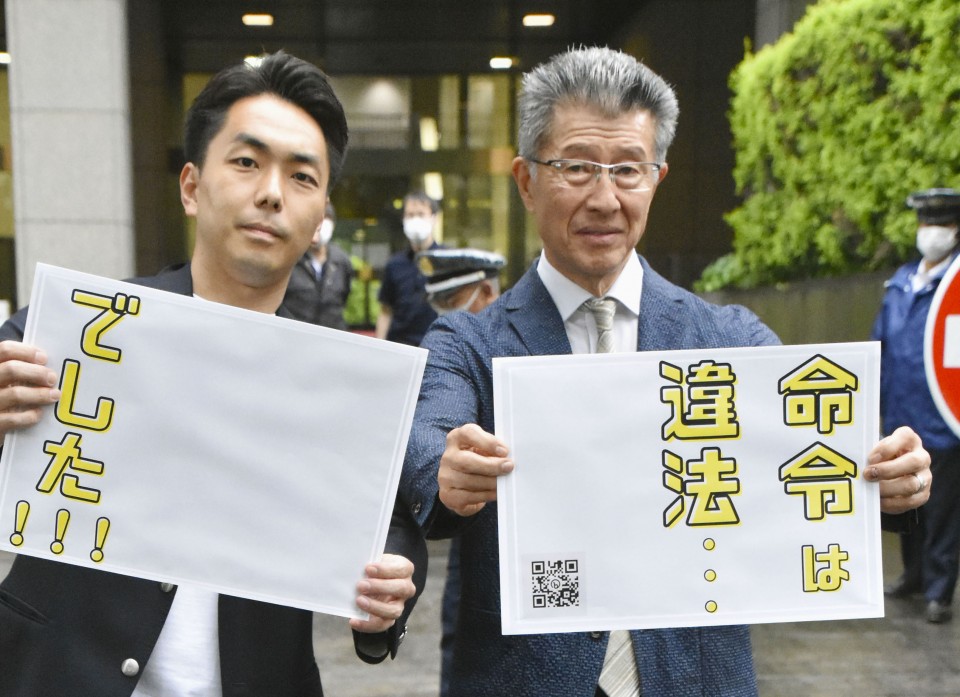 Global-Dining Inc. President Kozo Hasegawa (R) holds a banner reading "The order (was) illegal" in front of the Tokyo District Court on May 16, 2022. (Kyodo)

The first ruling of its kind comes amid hardships for restaurant and bar operators as they face restrictions and profits fall every time infections surge.

"About 75 percent of our claims were accepted," Kozo Hasegawa, president of Global-Dining, told a press conference after the ruling. But he also said, "Our basic human rights were neglected. It's unacceptable."

Following last year's revision to a coronavirus special measures law, prefectures could order restaurants and other businesses to cut operating hours during a state of emergency if they defied the initial request without a valid reason.

The court found that the order issued in March last year to Global-Dining did not meet the requirement under the law that such an order must be issued only when "especially needed."

Global-Dining has said it took sufficient precautionary measures to prevent infections among its staff and customers while adding that the order took aim at the company, which had publicly voiced its intention to disobey the request to cut operating hours.

Restaurants operated by the company were among some 2,000 establishments that did not comply with a request to close by 8 p.m. under a COVID-19 state of emergency issued in January 2021 in the Tokyo area and other prefectures, according to the plaintiff's side.

On March 18, 2021, the Tokyo metropolitan government ordered 27, of which 26 were Global-Dining outlets, to close by 8 p.m. until the emergency declaration was lifted.

In handing down the ruling, Presiding Judge Norihiro Matsuda said, "It is difficult to acknowledge that (Global-Dining) increased the risk of community spread of infections."

He also said the order had "only a slight effect on controlling infections" as it was issued only a few days before the state of emergency was lifted.

The metropolitan government has insisted that Global-Dining's announcement of defiance on its website prompted other restaurants to become reluctant to follow the order. But the court rejected the view.

The court also denied a claim by the company alleging negligence by Tokyo Gov. Yuriko Koike, dismissing their damages claim of 104 yen ($0.8). As part of its reasoning, the court said the metropolitan government had allowed disobedient companies to explain their positions.

Koike responded to the ruling by saying, "We are aware that the order was necessary and appropriate to prevent infections."

Toshiyuki Munesue, professor of constitutional law at Senshu University, said the ruling underscored that prefectures must present a specific reason when issuing such an order.

The ruling "will be helpful when we consider what kind of system is desirable to prepare for another wave of the novel coronavirus as well as for new infectious diseases."