Terunofuji bounced back Monday from his opening-day loss at the Summer Grand Sumo Tournament by beating rank-and-file opponent Takayasu, but the victory might not dispel doubts about the injury-hit yokozuna's health.

After losing to komusubi Daieisho in his first bout since heel and knee injuries forced his withdrawal from the March tourney, Terunofuji still looked far from his best against No. 1 maegashira Takayasu (0-2) on Day 2 at Ryogoku Kokugikan. 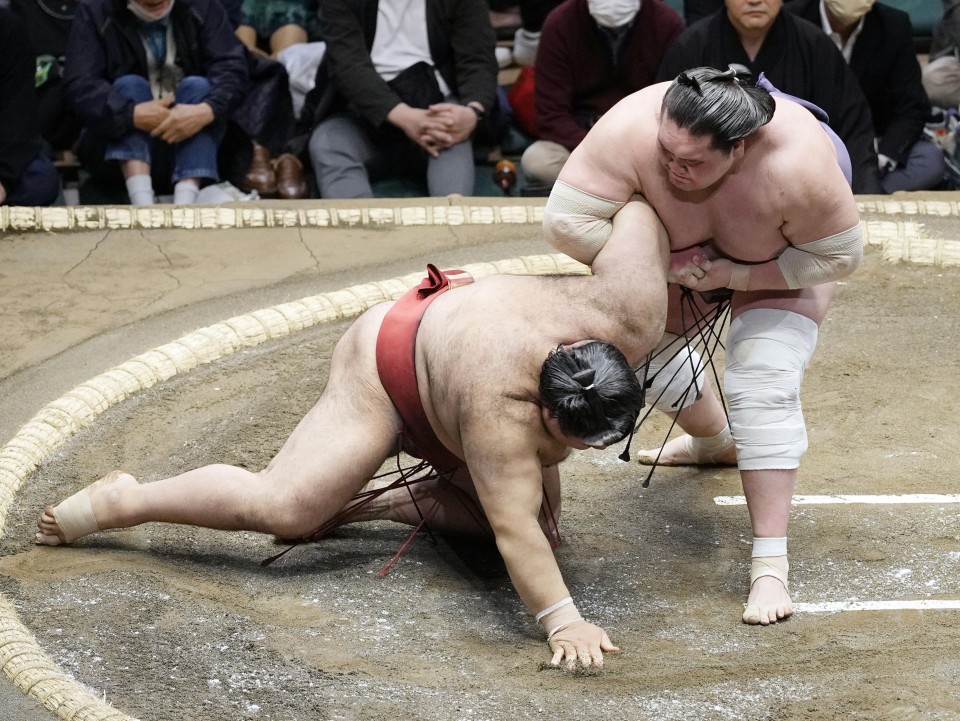 Terunofuji (R) defeats Takayasu on the second day of the Summer Grand Sumo Tournament on May 9, 2022, at Tokyo's Ryogoku Kokugikan. (Kyodo)

The pair locked up in the middle from the jump, with the Mongolian-born grand champion initially unable to establish his preferred belt grip.

After securing the hold, Terunofuji jostled back and forth with his former ozeki opponent, eventually dropping him to the clay with an arm-lock throw.

For the second straight day, two of the three ozeki were losers, with none of the wrestlers at sumo's second highest rank remaining unbeaten at the 15-day tournament.

After a stalemate at the opening clash, Kotonowaka stayed composed as Shodai drove him back to the edge and thrust him down a split second before stepping out.

"I wasn't sure (if I'd won) but I saw the official point in my direction," Kotonowaka said. "I am quietly confident and I just want to keep it going."

The 0-2 start marks another subpar beginning to a tournament for Shodai, who came into the March tourney as a demotion-threatened "kadoban" ozeki.

Mitakeumi took his first loss of the meet against one of the other young stars of the division, Mongolian komusubi Hoshoryu (1-1).

The 22-year-old nephew of former yokozuna Asashoryu showed off his footwork and grappling skills as he deflected the ozeki's opening charge and pushed him over the straw.

"I feel more confident this tournament," said Hoshoryu, who made a winning debut in the three "sanyaku" ranks below yokozuna in March.

"I just want to win as many bouts as possible until the final day."

Takakeisho registered his first win by forcing out No. 2 Kiribayama, who beat Shodai the previous day.

Takakeisho, who also fought as a kadoban in March, looked uncomfortable after being drawn into a slapping match with Kiribayama, but managed to hold his ground and force his opponent out.

The champion of the March grand tournament, sekiwake Wakatakakage, took his first loss against giant-killing No. 3 Tamawashi, who upset sekiwake Abi the previous day.

The Mongolian-born maegashira made an initial false start but was strong off the mark the second time around, thrusting Wakatakakage down for his first head-to-head win against the sekiwake.

Abi rebounded from his opening-day loss by quickly thrusting out No. 3 Hokutofuji (0-2) following a strong opening charge.

The sekiwake is aiming to improve on an 8-7 finish in March after earning 12 wins in two straight meets since his return to the top division.

Daieisho took his first loss, slipping on the dohyo to give former sekiwake and current No. 4 Takanosho (1-1) an easy win by slap down.