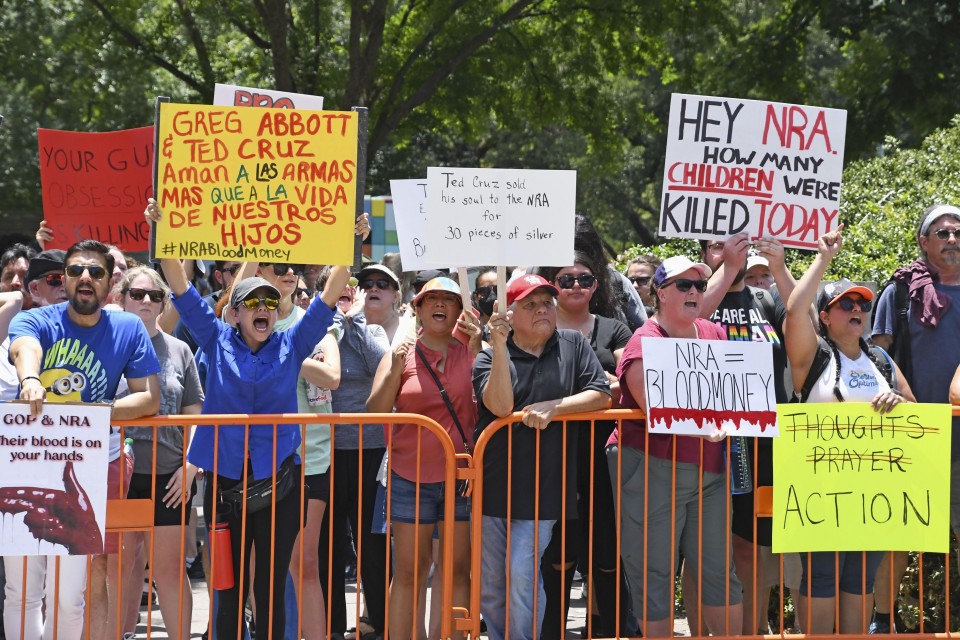 Protesters gather in front of the venue of an annual meeting of the National Rifle Association in Houston, Texas, on May 27, 2022. Earlier in the week, an 18-year-old gunman opened fire at an elementary school in Uvalde, Texas, killing more than 20 people, most of them children. (Kyodo) ==Kyodo

NAGOYA - The Japanese government will fight a 156 million yen ($1.23 million) damages lawsuit filed by relatives of a Sri Lankan woman who died last year while in custody at an immigration center in central Japan, sources close to the matter said Sunday.

The family of Ratnayake Liyanage Wishma Sandamali, who alleges she was illegally detained and died due to a lack of necessary medical care, filed the lawsuit at the Nagoya District Court in March, two days before the first anniversary of her death.

TOKYO - Around 193 million people worldwide experienced acute food insecurity in 2021, a new high, with Russia's war in Ukraine expected to aggravate the situation, a report by international humanitarian and development groups says.

Calling for urgent international assistance, the annual Global Report on Food Crises, released May 4, looked at 53 countries and territories. The main drivers were conflicts, weather extremes, and macroeconomic shocks, mainly caused by the coronavirus pandemic.

TOKYO - An earthquake with a preliminary magnitude of 5.4 struck off the coast of Ibaraki Prefecture in Japan's east on Sunday, but there was no threat of a tsunami, the country's weather agency said.

The quake, which occurred around 3:55 p.m. with the focus at a depth of about 50 kilometers, registered 4 on the Japanese seismic intensity scale of 7 in parts of Ibaraki, northeast of Tokyo, the Japan Meteorological Agency said.

Small plane with 22 people on board goes missing in Nepal

KATHMANDU - A small plane with 22 passengers and crew members on board, headed to a popular tourist destination in Nepal, went missing Sunday morning, police and airline officials said.

A Twin Otter plane operated by privately run Tara Air took off shortly before 10 a.m. from the resort town of Pokhara in central Nepal, heading northwest to Jomsom, a town known to trekkers, according to an airline official who spoke to Kyodo News by phone.

TOKYO - Four Japanese national universities plan to apply for a 10 trillion yen ($79 billion) fund established by the government to bring institutions up to par with the world's top universities, a recent Kyodo News survey showed.

Tohoku University, Tokyo University of Agriculture and Technology, Nagoya University and Osaka University intend to apply for the funds, established as part of the government's efforts to promote science and technology in Japan.

TOKYO - Tries from Marika Koroibete and Dylan Riley and a smothering defensive performance carried Saitama Wild Knights to an 18-12 win over Tokyo Sungoliath in the inaugural League One championship final Sunday.

The Robbie Deans-coached Wild Knights prevented a Sungoliath try, with All Blacks playmaker Damian McKenzie keeping the No. 1 regular-season team in the contest at Tokyo's National Stadium with a perfect 4-from-4 kicking performance.