Japan's top court on Wednesday ruled the inability of Japanese citizens abroad to cast ballots to decide whether to dismiss appointed Supreme Court justices is unconstitutional.

The successful appeal brought by five people including Tsukasa Hirano, a Japanese man living in Brazil, and film director Kazuhiro Soda, argued the exclusion violates citizens' "inalienable right to choose their public officials and to dismiss them" as defined in Article 15 of the Constitution. 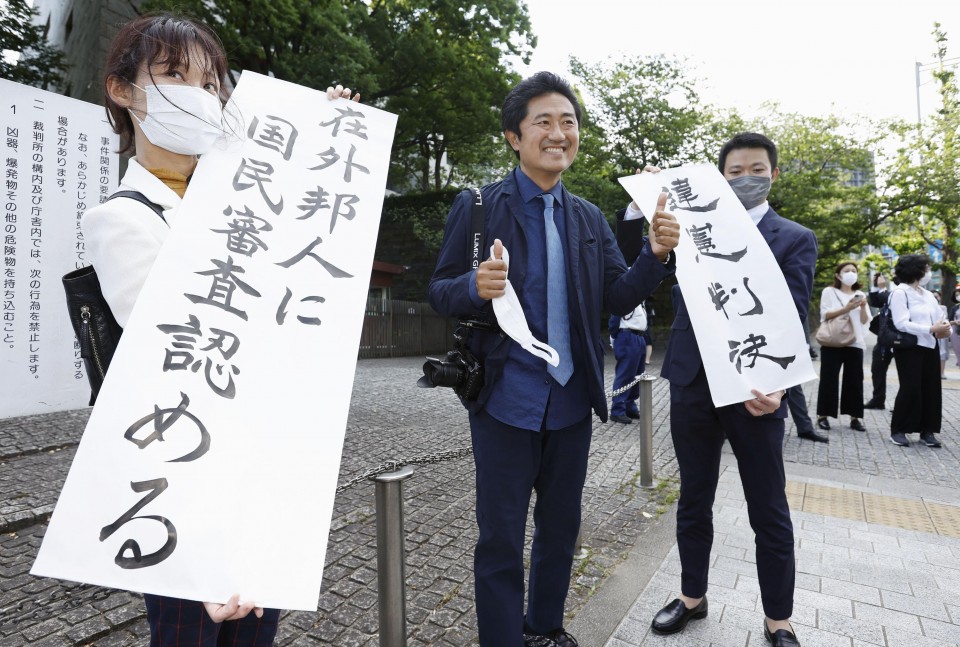 Film director Kazuhiro Soda (C) smiles outside Japan's Supreme Court in Tokyo, after its ruling on May 25, 2022, that it is unconstitutional not to allow Japanese nationals living abroad to vote on whether to dismiss appointed supreme court justices. (Kyodo)

The decision was unanimous from all 15 justices and handed down by Presiding Justice Naoto Otani at the Supreme Court's Grand Bench, with its ruling stating, "The Constitution guarantees the right to vote in public reviews of Supreme Court justices just as it does enfranchisement, and limits on the right are in principal unacceptable."

The ruling said the state neglected its duty of revising the law on the public reviews of Supreme Court justices, citing that it would not have been remarkably difficult for it to adopt legal measures while preserving the review's fairness, and consequently ordered the government pay 5,000 yen ($39) in damages to each plaintiff.

Failure to allow the 43-year-old Hirano living in Brazil -- the only one of the five plaintiffs still residing outside Japan -- to vote in the next review would also be unconstitutional, the court ruled.

Standing outside the Supreme Court after the judgment, a jubilant Soda, 51, hailed its unanimous decision as "a total win," and called for no further infringements of the rights of the estimated 1.3 million Japanese citizens living abroad.

Deputy Chief Cabinet Secretary Seiji Kihara told a press conference after the ruling that the government would "solemnly accept" it, and that "legislative measures could be needed." But he avoided committing to a specific time when bills for the measures would be submitted to the Diet.

Japan holds public reviews of Supreme Court justices in time with general elections, and voters can decide whether a justice appointed since the last election is fit for office. A majority of votes against a sitting judge is required for their removal from office.

Held 25 times since 1949, the review has never dismissed a justice.

The judgment that an existing law is unconstitutional is the 11th from the country's highest court since 1973 and the first since 2015.