Sole yokozuna Terunofuji moved to within one win of the lead after a bounce-back victory Saturday at the Summer Grand Sumo Tournament.

Following Friday's upset against No. 3 maegashira Tamawashi, the injury-stricken grand champion improved to 5-2 by overpowering No. 4 Endo (3-4) in Day 7's last bout at Ryogoku Kokugikan.

Terunofuji wrapped up the former komusubi and quickly sought to end the bout with an arm-lock throw. Endo slipped out but earned only a momentary reprieve, with Terunofuji slapping him down as he retreated. 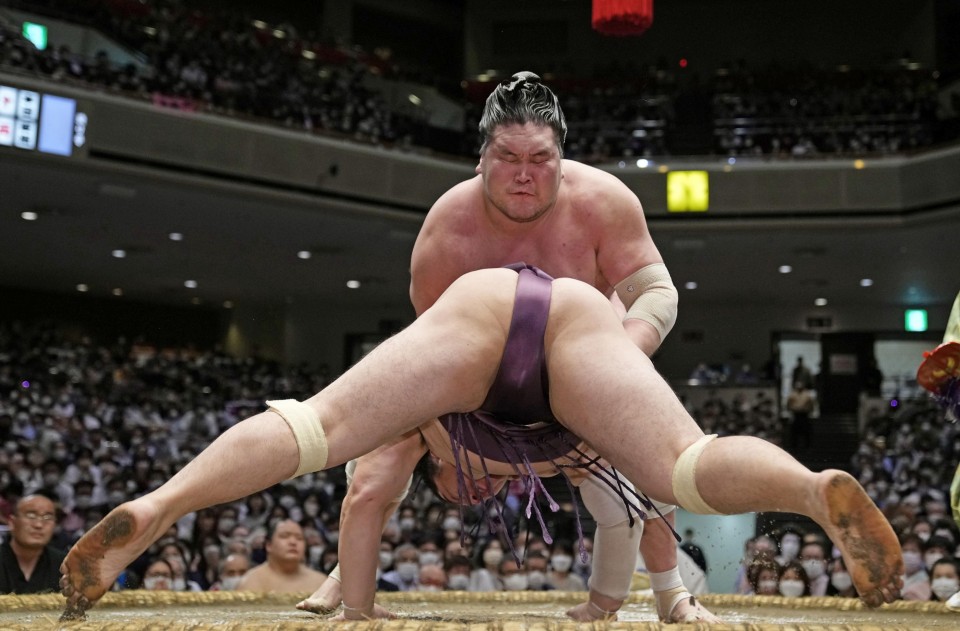 The sole overnight leader, Bulgarian No. 11 Aoiyama, took his first loss via push out against No. 12 Sadanoumi, leaving the two rank-and-file wrestlers tied atop the leaderboard at 6-1.

Substandard performances by the ozeki trio continued, with Takakeisho the only one of the three at sumo's second-highest rank to win.

Takakeisho, a two-time grand tournament winner, improved to 4-3 with a convincing push-out win over Tamawashi (5-2). The ozeki delivered a strong opening hit and drove the Mongolian maegashira straight back over the edge.

Ozeki Shodai dropped to a miserable 1-6 with a push-out loss to No. 3 Hokutofuji (2-5). A former komusubi, Hokutofuji had all the momentum from the jump, delivering solid shoves to the hapless ozeki's neck and armpit before bundling him out.

Ozeki Mitakeumi (3-4) became the latest big name to lose to komusubi Daieisho, who has already beaten Terunofuji and Shodai at the 15-day meet.

A former sekiwake, Daieisho (5-2) convincingly won the opening clash and sent Mitakeumi backpedaling over the straw with shoves to the upper body.

"I watched Mitakeumi's move and did not want to make the mistake of being too hasty with my attack," Daieisho said in a post-bout interview conducted by sumo elder Magaki, better known as the former yokozuna Hakuho.

Komusubi Hoshoryu (5-2) earned his third straight victory in impressive fashion, forcing out sekiwake Abi (4-3) after getting in close from the jump shutting down his opponent's favored thrusting attack.

The talented 22-year-old from Mongolia said he has been receiving pointers during the 15-day tournament from his uncle, former yokozuna Asashoryu.

Sekiwake Wakatakakage slipped to 3-4 with a defeat to Mongolian No. 2 Kiribayama (4-3), who reversed an attempted thrust down and slapped down the March tournament winner.

No. 2 Kotonowaka (3-4), who started the meet by beating all three ozeki, skidded to his fourth consecutive loss against No. 1 Takayasu (2-5).