The Los Angles Angels' Shohei Ohtani hit a home run in each of his first two at-bats in a 25-hit slugfest on Sunday, but it was not enough to stop the Toronto Blue Jays from winning a high-scoring affair 11-10.

Shohei Ohtani of the Los Angeles Angels hits a two-run homer in the third inning of a baseball game against the Toronto Blue Jays on May 29, 2022, at Angel Stadium in Anaheim, California, his 11th home run of the season. (Kyodo) ==Kyodo

Ohtani scored the game's opening run with a solo homer in the first inning and then added his team's third run with a 425-foot, two-run blast in the third.

With his 10th and 11th homers of the season, he reached double figures in home runs for the fourth time in his Major League Baseball career.

"I'm happy with my performance today," said Ohtani, who entered the game hitless in his past 12 at-bats.

"I can't tell (if I've broken out my offensive slump) just from one day's work. I'll have to keep playing and see where this takes me," he said.

Ohtani went 2-for-3 with three RBIs, two runs scored and one walk, and was also hit by a pitch on his elbow guard. He is batting .249 and is sixth in the American League with 32 RBIs.

The Angels blew a three-run lead in the wild game that featured 13 pitchers, giving up five runs across the seventh and eighth innings before a crowd of 36,568 at Angel Stadium. 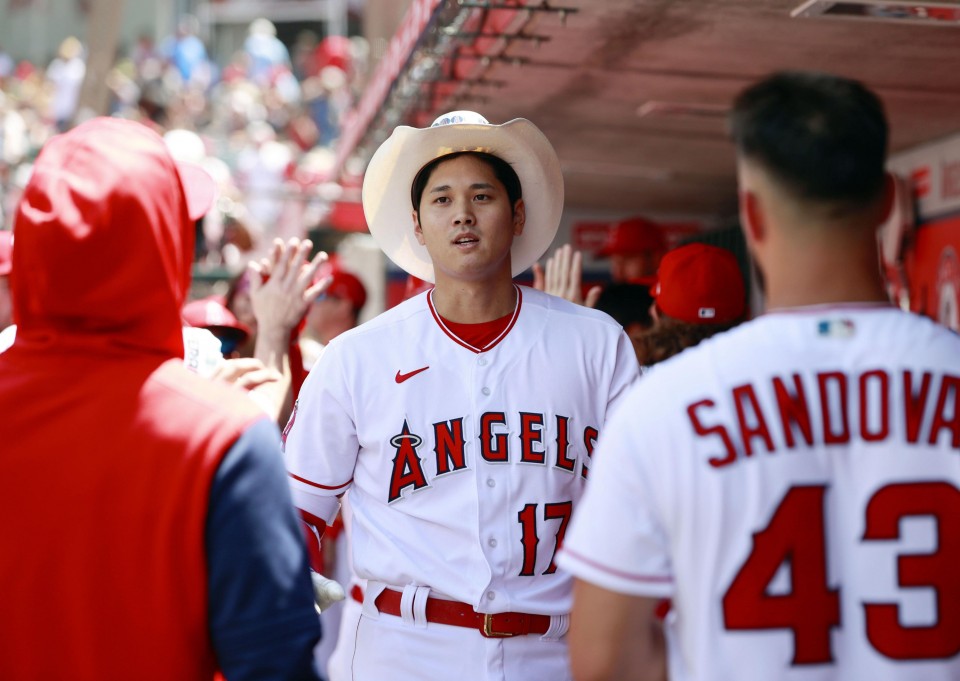 Los Angeles Angels designated hitter Shohei Ohtani wears the home run cowboy hat after hitting a two-run shot in the third inning of a baseball game against the Toronto Blue Jays on May 29, 2022, at Angel Stadium in Anaheim, California. (Kyodo) ==Kyodo

Lourdes Gurriel Jr.'s five RBIs helped the Blue Jays sweep the four-game series, but three of the games were decided by just one run.

Ohtani, who left his last pitching start with back tightness after six innings, is expected to make his next start on the mound against the New York Yankees at Yankee Stadium on Thursday.