Yoon Suk Yeol was sworn in as South Korea's first conservative president in five years on Tuesday and offered to help North Korea with an "audacious" economic plan if it denuclearizes, as concerns mount over Pyongyang's increasing missile activities.

"If North Korea genuinely embarks on a process to complete denuclearization, we are prepared to work with the international community to present an audacious plan that will vastly strengthen North Korea's economy and improve the lives of its people," Yoon said in his inaugural address. 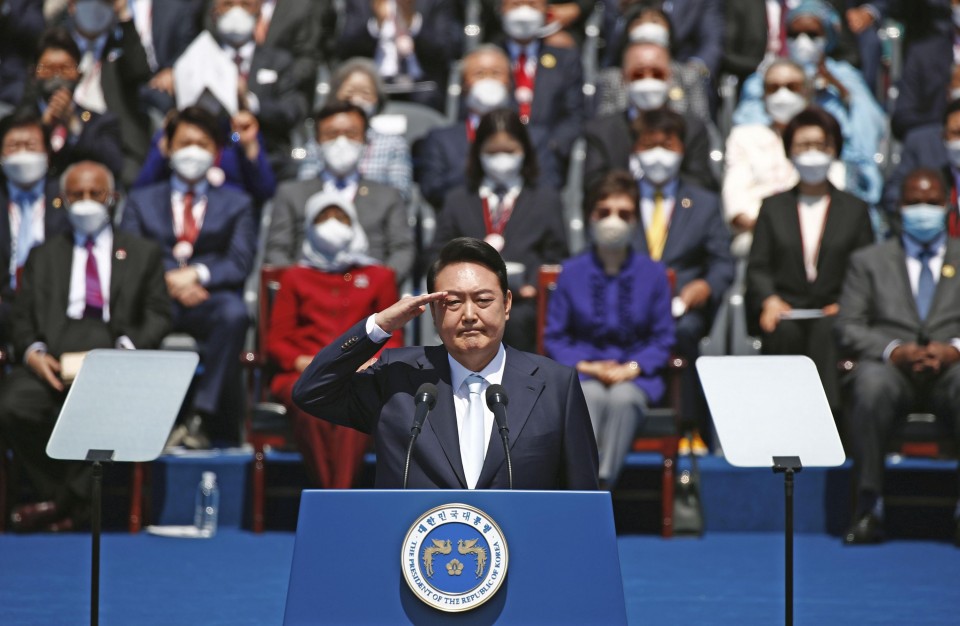 In the 16-minute speech delivered in the National Assembly compound after taking the oath of office, Yoon also emphasized dialogue with North Korea to peacefully resolve "threats" posed by it.

"While North Korea's nuclear weapon programs are a threat not only to our security and that of Northeast Asia, the door to dialogue will remain open so that we can peacefully resolve this threat," he said.

Underscoring the importance of freedom and sustainable peace, Yoon said denuclearization would contribute to peace and prosperity on the Korean Peninsula and beyond.

Tensions in the region have sharply grown in the wake of several rounds of ballistic missile tests conducted by North Korea over the past months, and concerns are growing that Pyongyang may carry out a nuclear test.

Under Yoon, who has favored stronger ties with the United States and taken a hard-line stance toward North Korea, Seoul's policy toward Pyongyang is expected to make a sharp turn from rapprochement to one based on pressure. During his first speech as president, however, he avoided using tough language against the North.

The speech also made no mention of Japan-South Korea ties, which worsened under the government of his predecessor, Moon Jae In, due largely to issues stemming from Japan's 1910-1945 colonial rule of the Korean Peninsula, including wartime labor.

Yoon, 61, was the nation's top prosecutor before quitting in March 2021 after a bitter clash with Moon's progressive government over its prosecutorial reform drive, which he opposed. 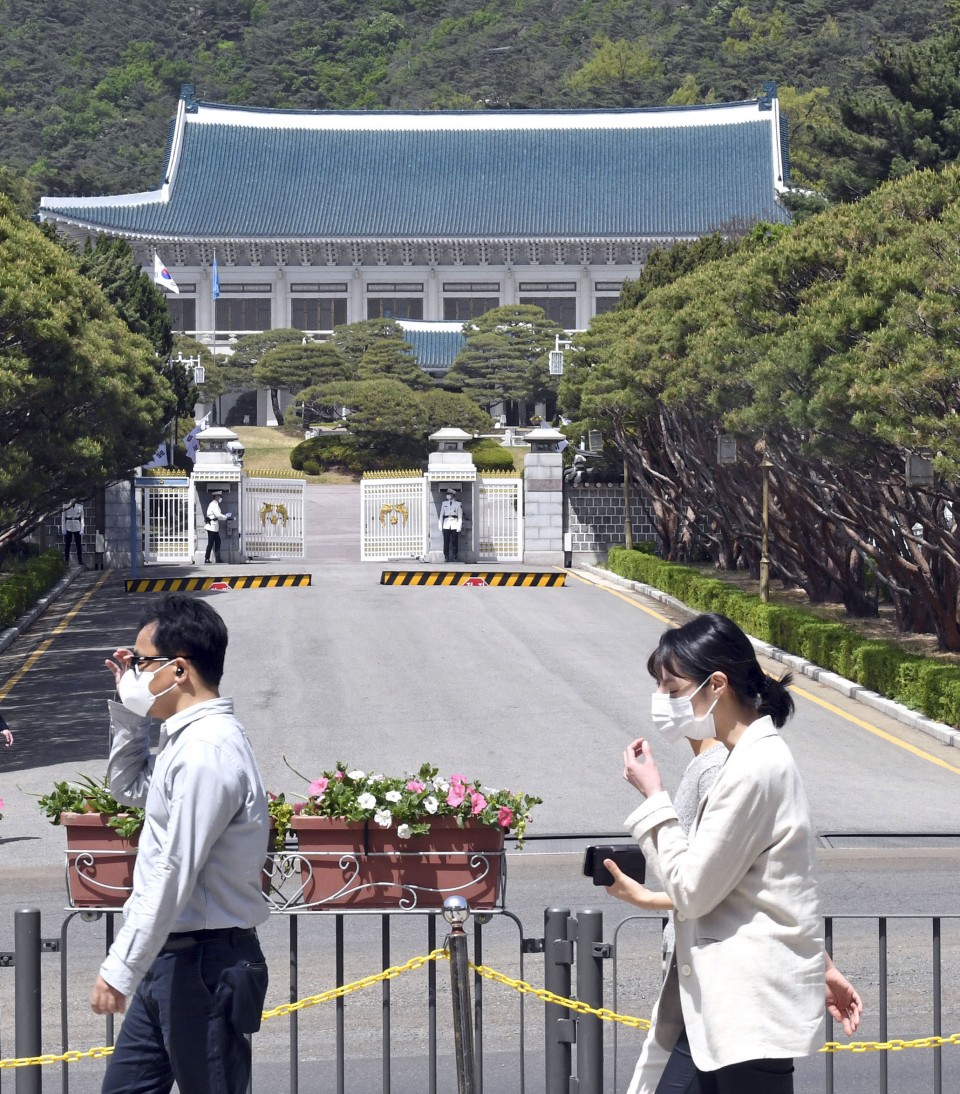 The Blue House in Seoul, also known as Cheong Wa Dae, is pictured on April 27, 2022. The Blue House opens to the public from May 10, immediately after Yoon Suk Yeol's inauguration ceremony as South Korea's president as he moves the presidential office to the Defense Ministry compound. (Kyodo)

Yoon subsequently turned his sights on the presidency and, as the main opposition party nominee, he went on to beat a rival candidate from Moon's party in the March election by a narrow margin.

After the ceremony, Yoon met with the foreign dignitaries starting with Emhoff, the husband of U.S. Vice President Kamala Harris.

During his talks with the U.S. representative, Yoon reaffirmed South Korea's alliance with the United States at a time of heightened tensions on the divided peninsula.

The new president is scheduled to meet with President Joe Biden when the U.S. leader visits South Korea from May 20 before traveling to Japan.

Yoon, who faces the task of rebuilding his country's ties with Japan, also held a meeting with Hayashi, who brought with him a personal letter from Prime Minister Fumio Kishida.

The South Korean leader told Hayashi that he hopes to meet with Kishida at an early date, showing his readiness to work toward thawing the relations.

Speaking to reporters, Hayashi said he told Yoon the two countries must resolve "matters of concern," such as the wartime labor issue. In his letter to Yoon, Kishida expressed expectations for his counterpart's "leadership" in helping them "remove obstacles."

The top leaders of the two countries have not held an in-person, sit-down meeting since December 2019.

Seoul had hoped Kishida would attend Yoon's inaugural ceremony, but Tokyo decided that he could not go without any guarantee of making progress on outstanding disputes, according to Japanese government sources.

Domestically, Yoon will be presiding over a nation in the midst of recovery from the coronavirus pandemic and under strain because of economic disparities and skyrocketing housing prices, particularly in the Seoul metropolitan area.

Yoon's government is believed to face difficulties legislating policies in the National Assembly as his party finds itself in the minority. One of its immediate challenges will be winning local elections and parliamentary by-elections in June.

For the post of prime minister, Yoon has picked Han Duck Soo, who has previously served as premier under both conservative and progressive administrations. But with no firm prospect of swift parliamentary consent, concerns have grown over a possible delay in launching a Cabinet.

Yoon has since pushed plans to relocate the presidential office from the Blue House to the Defense Ministry compound to be away from the "symbol of imperial power" and closer to the public.

He was expected to work from the new location from Tuesday, and the sprawling hillside complex that previous presidents had used as their office, known locally as Cheong Wa Dae, was opened to the public from noon as promised. 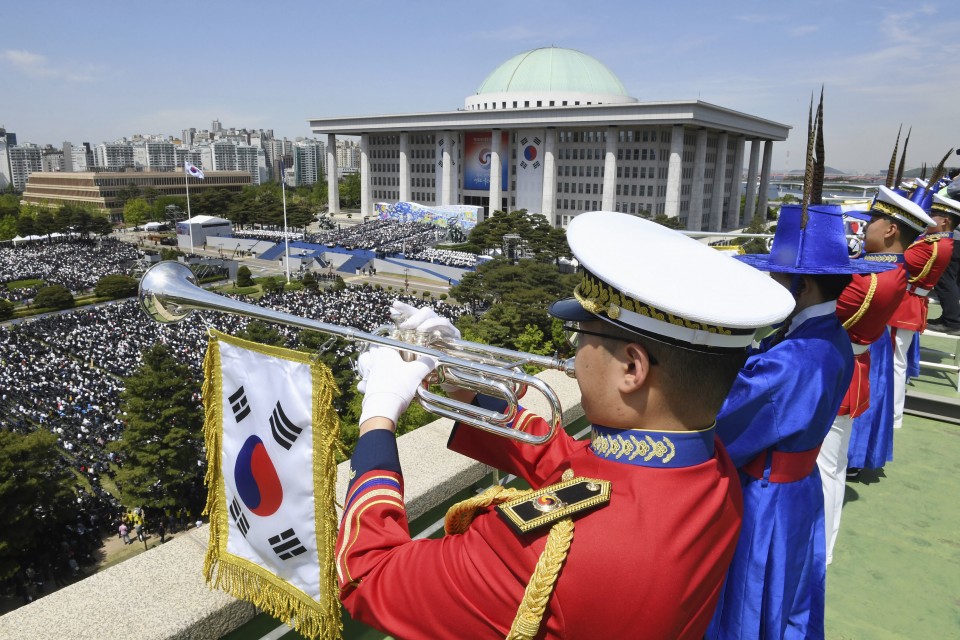 The inauguration ceremony of South Korean President Yoon Suk Yeol is held in the National Assembly compound in Seoul on May 10, 2022. (Kyodo) ==Kyodo

South Koreans have mixed views toward the new administration, with some expressing concerns about Yoon's relatively little political experience.

Others eager to see a government largely different from previous ones seem to be taking heart in that very element.

"Yoon has the shortest political experience compared with previous presidents...but that could actually enable him to make bold decisions to lead South Korea in an unconventional way," said Chung Tae Min, a 36-year-old man.

All able-bodied South Korean men must serve in the military for a few years. Amid criticism that conscripts are woefully underpaid, Yoon promised to boost their pay, but questions linger over the practicality of the costly proposal.

Many South Koreans have also voiced concern over Yoon's perceived lack of attention to women and gender equality, given his divisive comments during his campaign, including his promise to abolish the Gender Equality and Family Ministry.

The promise was seen as an effort to curry favor with young male voters who are discontent with the country's male-only conscription and see efforts to end discriminatory practices against women as "reverse discrimination" toward men.

Yoon has since decided to keep the ministry for the time being, but his speech Tuesday did not seem to inspire confidence among many women.

"I'm deeply worried because his inaugural speech did not touch at all on policies for the socially weak and females," a 29-year-old Seoul resident said, adding she is also concerned about the ministry's fate.

In South Korea, a president serves a single five-year term.

South Korea to allow taking masks off outside from May 2