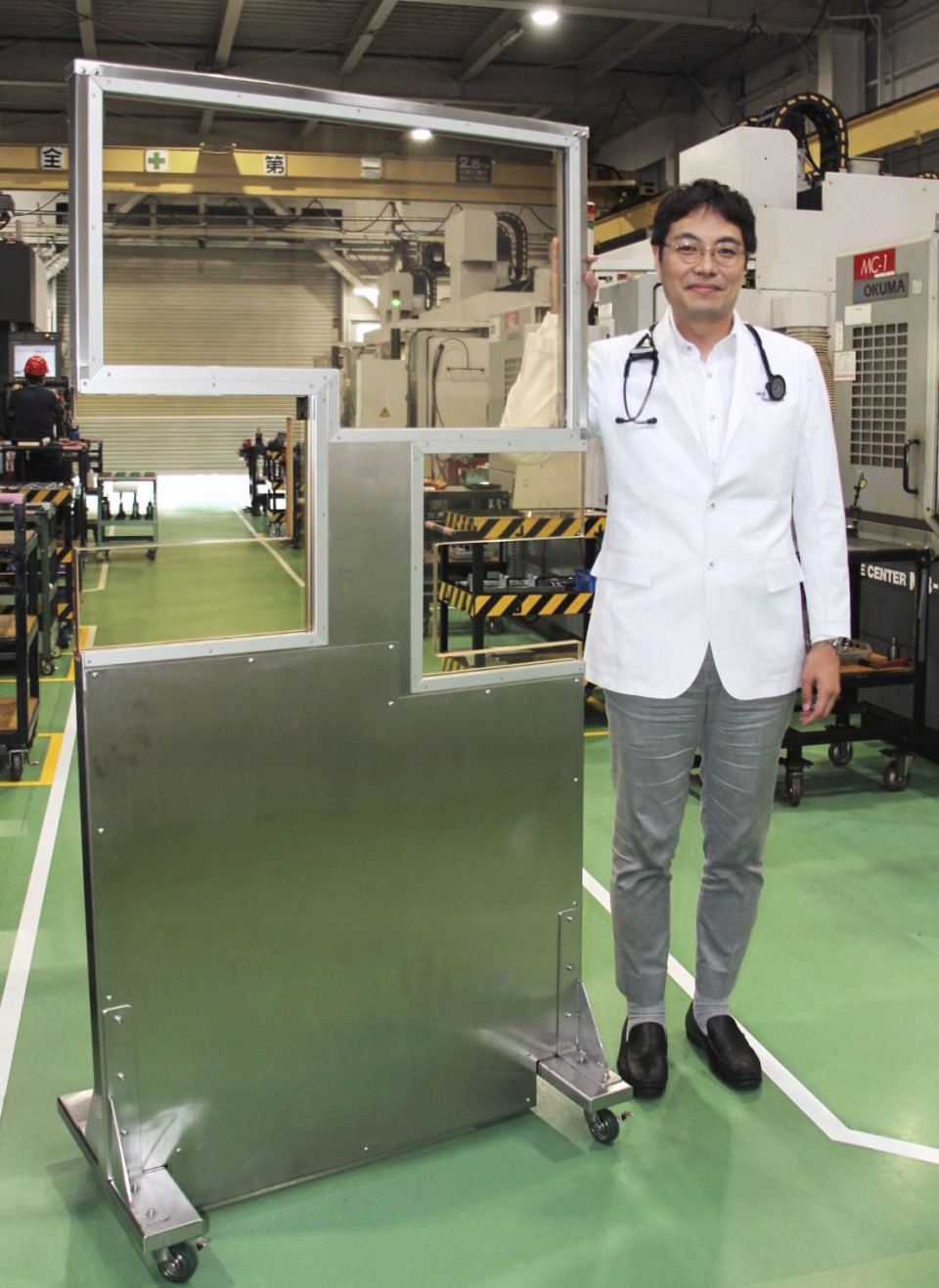 MS Group Co. President Kunihiro Sakoda stands next to a protective guard he developed that drastically reduces exposure to radiation during catheterization surgeries at the company's factory in Kiyosu, Aichi Prefecture, on May 12, 2022. (Kyodo)

But Kunihiro Sakoda, 43, the president of the company who also works as a cardiologist, has been pursuing how to contribute to medical care with his company's manufacturing technology.

MS started a joint development project with doctors who asked Sakoda at the end of 2020 about how to protect pregnant female physicians from exposure to radiation during cardiac catheterization surgeries. Many echocardiography physicians are women.

During cardiac catheterization, widely practiced for the treatment of cardiac vascular diseases in recent years, a thin tube is inserted into an artery often near the groin and directed to the heart. The patient's burden is greatly reduced as the surgery does not involve opening the chest.

The patient must be irradiated, however, during surgery to accurately gauge the position of the instrument inserted. Protection of doctors involved, such as anesthesiologists and echocardiography physicians, from radiation exposure has been inadequate to date.

In many cases, conventional protective suits are shunned in surgery rooms as they are bulky and difficult to use.

"I feel unprotected. I don't want to be exposed to radiation, though I cannot say so openly while I am trying to get pregnant," said an echocardiography physician in her 30s.

The newly developed protective guard, which is roughly 180 centimeters high and 90 cm wide, reduces doctors' exposure to radiation to one-tenth of the current level while maintaining work efficiency, according to MS. 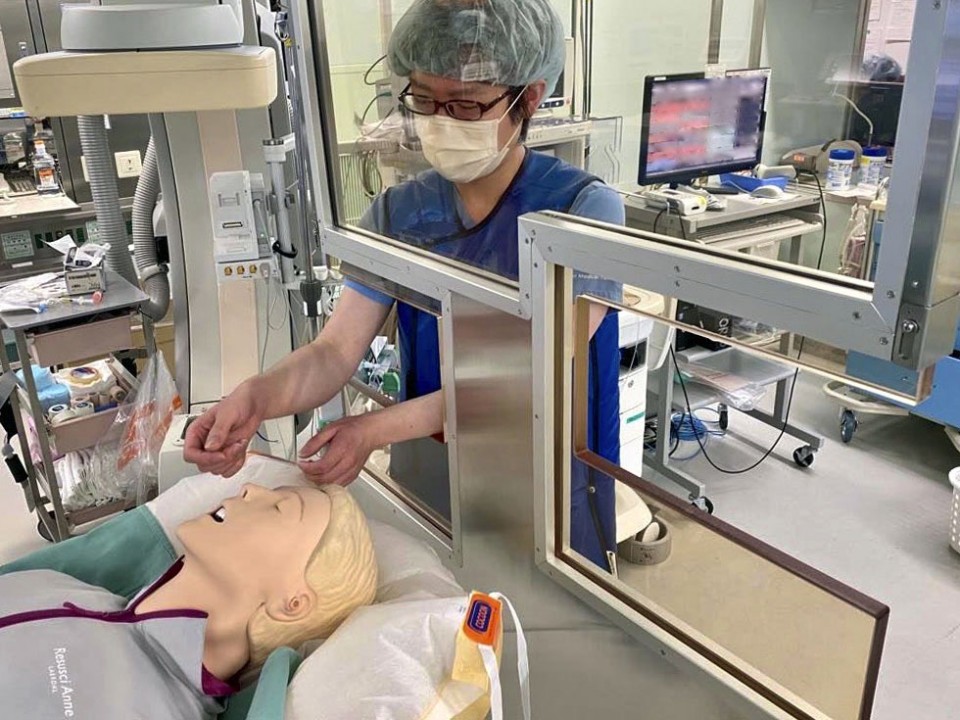 A simulation is conducted in February 2022 at Teikyo University Hospital in Tokyo, using a protective guard that drastically reduces exposure to radiation during catheterization surgeries. (Photo courtesy of MS Group Co.)(Kyodo)

Shielded from radiation by lead used in the plate, doctors can easily extend their hands through openings to carry out surgeries with minimal radiation exposure. The height of the openings is adjustable to the doctor's body dimensions.

The upper part of the board uses lead too, but there is no obstruction of view during surgeries since the plate is transparent. The guard is the result of Sakoda's earnest wish to "protect doctors," he said.

MS plans to release the guard in August but has yet to decide on a price. The company has already received inquiries from hospitals in the prefectures of Tokyo, Mie, Osaka, Kochi and Fukuoka and even those abroad.

A survey conducted two years ago by Akihisa Kataoka, a 45-year-old doctor at Teikyo University who collaborated in developing the protective guard, found that 20 of Japan's 58 medical institutions, which primarily conduct cardiac catheterization surgeries for people with heart valve issues, had female echocardiography physicians as the main operators.

Working at a hospital in Kunisaki, Oita Prefectures, two days a week, Sakoda had been exposed to radiation through cardiac catheterization surgery in treating infarctions, among other illnesses, in the past.

"We could make use of our know-how cultivated as a manufacturer" to produce the protective guard, he said.

"Improving the work environment has been an urgent issue for the formulation of women's careers. A long-held wish on the medical front has finally taken shape," Kataoka said. 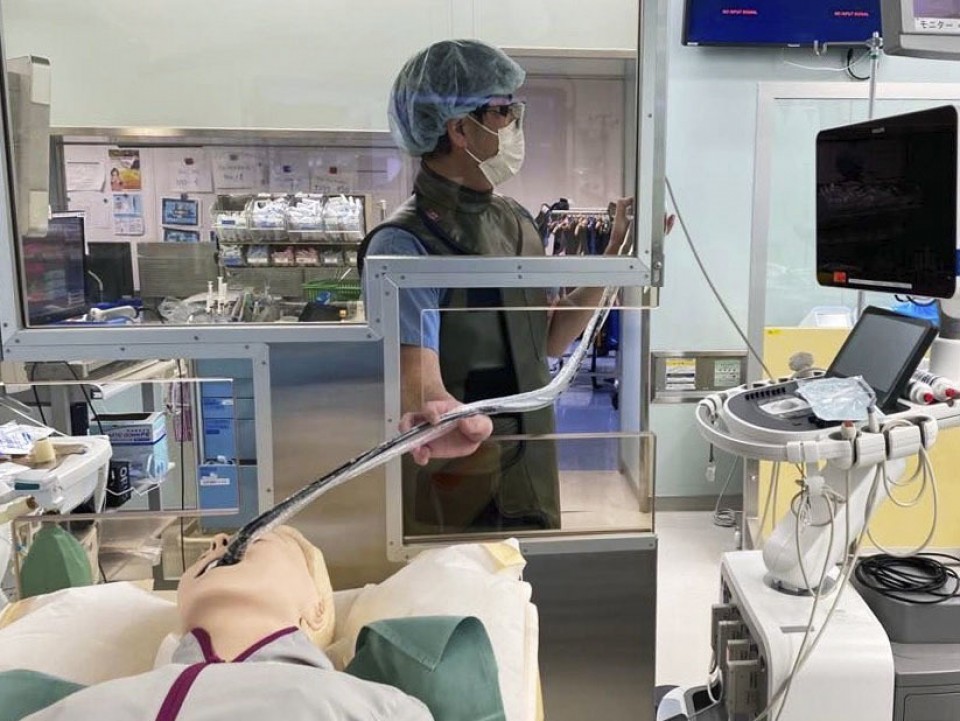