Yoon and Biden shared the view that North Korea's nuclear program presents a "grave threat" not only to peace and stability on the Korean Peninsula but also the rest of Asia and the world and sought complete denuclearization of the peninsula, according to the joint statement released after the two-hour summit talks. 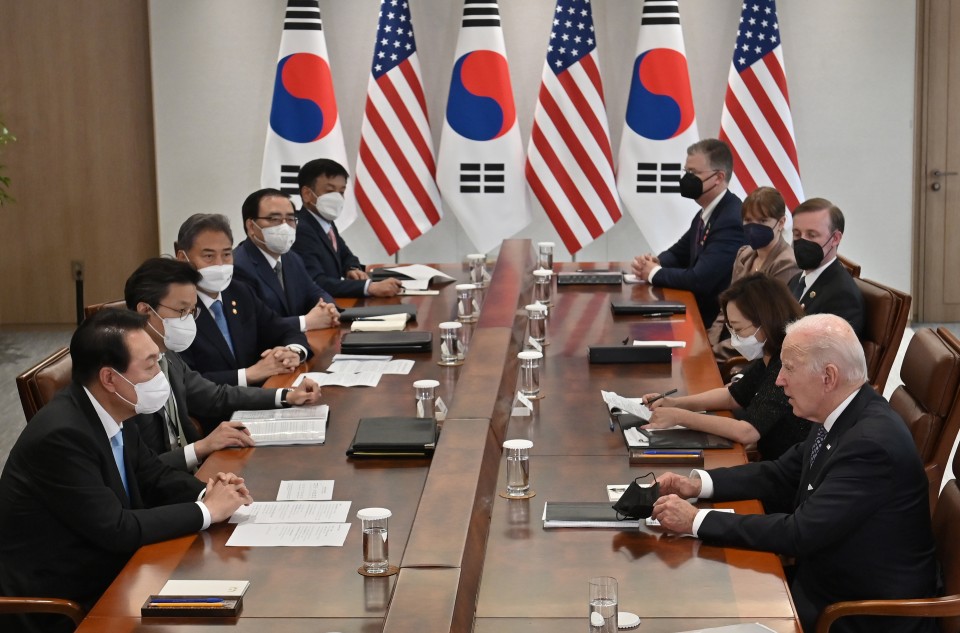 The two leaders agreed to "initiate discussions to expand the scope and scale of combined military exercises and training on and around" the peninsula, the statement said.

In responding to North Korean as well as common economic challenges, Yoon and Biden stressed the importance of trilateral cooperation with Japan.

"I think it's critically important that we have a very close trilateral relationship, including economically as well as militarily," Biden said in his joint press conference with Yoon after the meeting.

Given the frayed relationships between South Korea and Japan due to disputes over trade and historical issues stemming from the Japanese colonial era, Biden pointed to the need to improve the two Asian neighbors' ties "in a way that's mutually acceptable and agreeable to both countries," according to a senior U.S. official.

On the economic front, Yoon said during the joint press conference that South Korea will join the soon-to-be launched Indo-Pacific economic framework, known as IPEF. "Our two nations will work in concert to build the rules-based order in the Indo-Pacific, and taking that first step is to participate" in the framework, he said.

The two leaders agreed to work together to develop a comprehensive IPEF that will deepen economic engagement on priority issues, including the digital economy, resilient supply chains, clean energy, and other priorities geared toward promoting sustainable economic growth, according to the joint statement.

The launch of the IPEF is expected to be formally announced during Biden's stay in Japan on the second leg of his Asia trip. The U.S. leader will fly to Japan on Sunday for talks with Japanese Prime Minister Fumio Kishida the following day.

The Biden administration has proposed the IPEF as a key vehicle for U.S. engagement in a region expected to drive global growth for years to come.

The presidents of South Korea and the United States held talks amid high tensions on the Korean Peninsula following several rounds of missile launches from North Korea. Speculation is rife that the North has completed preparations for another nuclear test.

Meanwhile, the two leaders shared concerns about the rapid spread of COVID-19 within the reclusive country and vowed to provide assistance by working with the international community, reaffirming their commitment to facilitating the provision of humanitarian aid to the most vulnerable North Koreans.

Both South Korea and the United States have already offered to extend aid to the country. Biden said at the joint press conference that Pyongyang has not responded to the U.S. offer to provide vaccines against COVID-19.

On the possibility of a meeting with North Korean leader Kim Jong Un, Biden said at the news conference that it would depend on whether Kim is "sincere and serious." His predecessor Donald Trump held direct talks with Kim.

As Yoon was sworn in as president on May 10, Saturday's summit is the earliest in a term that a South Korean leader has held a bilateral meeting with the American president. 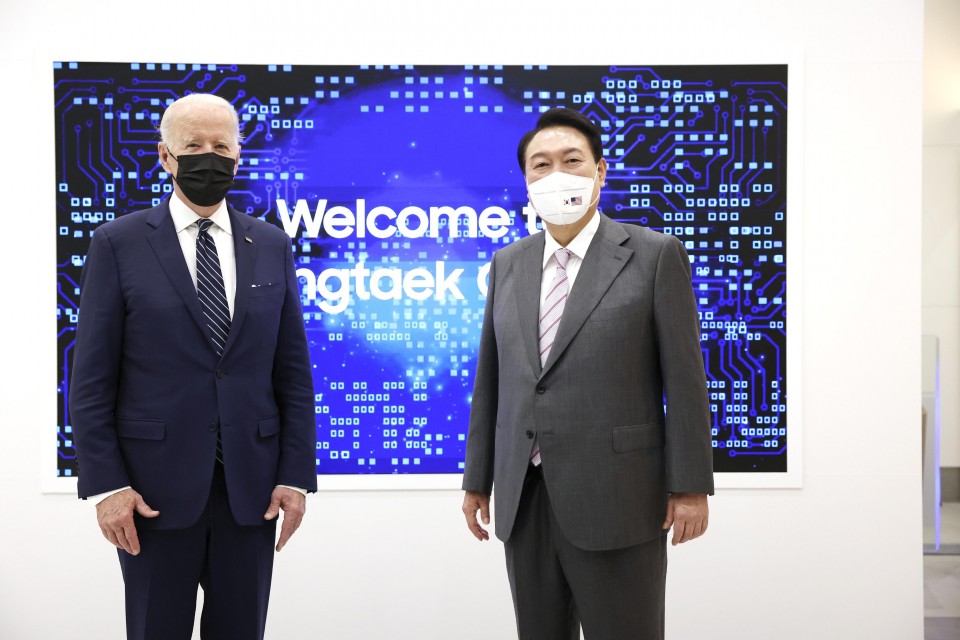 U.S. President Joe Biden (L) and South Korean President Yoon Suk Yeol pose for a photo as they visit a Samsung Electronics Co. chip plant in the suburbs of Seoul on May 20, 2022. (Photo courtesy of South Korea's presidential office)(Kyodo)

Biden started on Friday a five-day visit to Asia, his first trip to the region since taking office last year.

In case any major provocation from Pyongyang occurs during Biden's visit to Seoul, the two leaders will command the combined forces of their countries as a "plan B," according to South Korea's presidential office.

In its latest round of missile launches, North Korea fired three short-range ballistic missiles on May 12, marking the third launch this month.

Yoon, in marked contrast to his predecessor Moon Jae In, is known for taking a hard-line stance on North Korea.