North Korea on Tuesday reported more than 269,500 new cases of fever and six more deaths in the past day as suspected coronavirus cases continue to spread rapidly.

The number of new fever cases between Sunday evening and 6 p.m. Monday fell from some 392,900 cases recorded the day before. The total number of deaths now stands at 56, the state-run Korean Central News Agency said.

The number of new fever cases declined for the first time since the North Korean authorities started releasing data Saturday, but more than 1 percent of the nation's population of 26 million is being added to the number of fever sufferers each day. 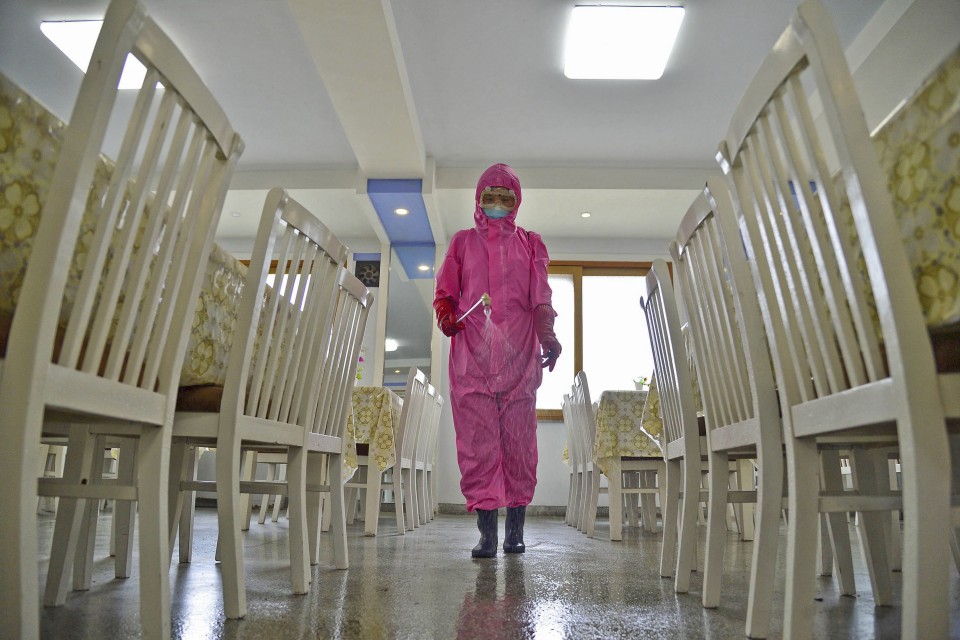 A worker disinfects a factory canteen in Pyongyang on May 16, 2022. (Kyodo)

With the latest figures, a total of more than 1.48 million people have suffered a fever since late April, of which more than 819,000 have recovered, KCNA said, citing data from the country's emergency epidemic prevention headquarters.

On Thursday, North Korea confirmed its first COVID-19 case since the pandemic started more than two years ago.

KCNA said Tuesday the nation's military was deployed to pharmacies in its capital Pyongyang and "began to supply medicines under the 24-hour service system" after leader Kim Jong Un criticized his Cabinet for not providing adequate support.

The country has not provided information on how many people have tested positive for the coronavirus. The origin of the fever in the nation has not been identified.

North Korea is believed to be vulnerable to infectious diseases due largely to chronic shortages of food and medical supplies due to international economic sanctions aimed at thwarting Pyongyang's nuclear and ballistic missile ambitions.

North Korea was expected to receive vaccines from Britain's AstraZeneca Plc through a U.N.-backed COVAX facility in May 2021, but the plan was postponed as the country was reluctant to follow instructions laid out by the program.