Japan's trade minister said Tuesday it would be difficult for the Group of Seven nations to ban Russian liquefied natural gas imports unless alternative suppliers can be found.

The G-7 nations including Japan have decided to ban or phase out coal and oil imports from Russia as part of sanctions imposed in response to its invasion of Ukraine. Speculation is now swirling that LNG will be the next energy source added to the list. 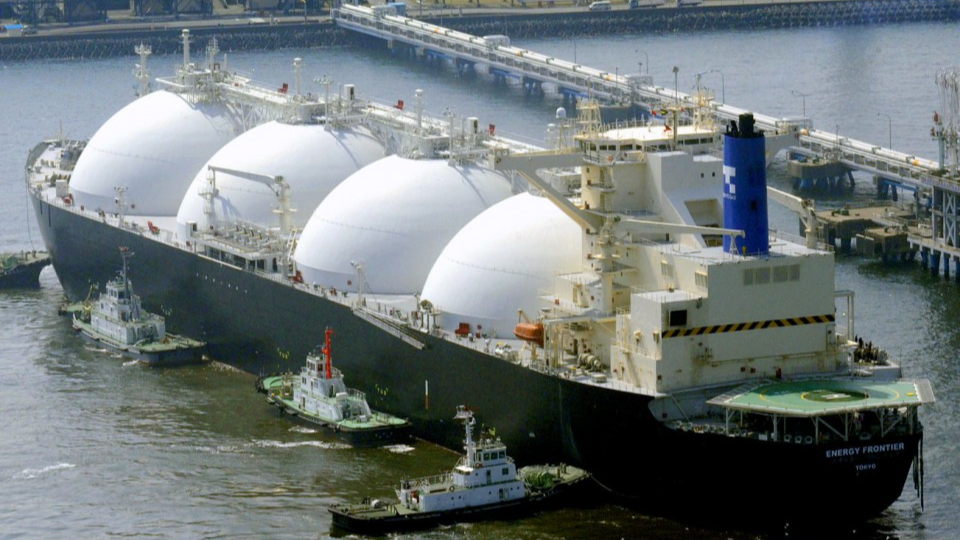 Japan's Economy, Trade and Industry Minister Koichi Hagiuda mentioned the difficulties in finding the alternative supply at a press conference and said, "If all parties (of the G-7) take simultaneous action (to ban Russian LNG imports) without securing alternative sources, the world economy, including the energy (sector), will be thrown into chaos."

But Hagiuda added he does not rule out the possibility of LNG joining the sanction list in the future, while being mindful of Europe's dependency on Russian LNG.

The United States banned imports of Russian oil, LNG and coal in March.

As for oil, Hagiuda pointed out that it might be possible to temporarily cover shortages by increasing production in the Middle East or elsewhere.

The minister also said he hopes the United States increases oil and gas production and becomes a major supplier of the resources, replacing Russia.

The Japanese government will back LNG projects in the United States by providing financial support to Japanese firms that take part in the projects, he added.

Earlier this month, Hagiuda visited Washington and held talks with U.S. Energy Secretary Jennifer Granholm, with the two agreeing on the importance of "free and open" global commerce of oil and natural gas from a short-term perspective and transition to renewable energy and nuclear power.

Also on Tuesday, Prime Minister Fumio Kishida's Cabinet approved expanded sanctions against Russia, a measure which the premier vowed to take in coordination with other members of the G-7 during his visit to London last week.

Under the measure, the assets of 141 additional individuals, including Russian Prime Minister Mikhail Mishustin and politicians from the Russia-backed, self-proclaimed Donetsk and Luhansk republics, will be frozen, according to the Japanese Foreign Ministry.

The G-7 consists of Britain, Canada, Germany, France, Italy, Japan and the United States, plus the European Union.