Japanese Foreign Minister Yoshimasa Hayashi, who met with Yoon in Seoul after he was sworn in, said they agreed to cooperate to that end by maintaining close communication. 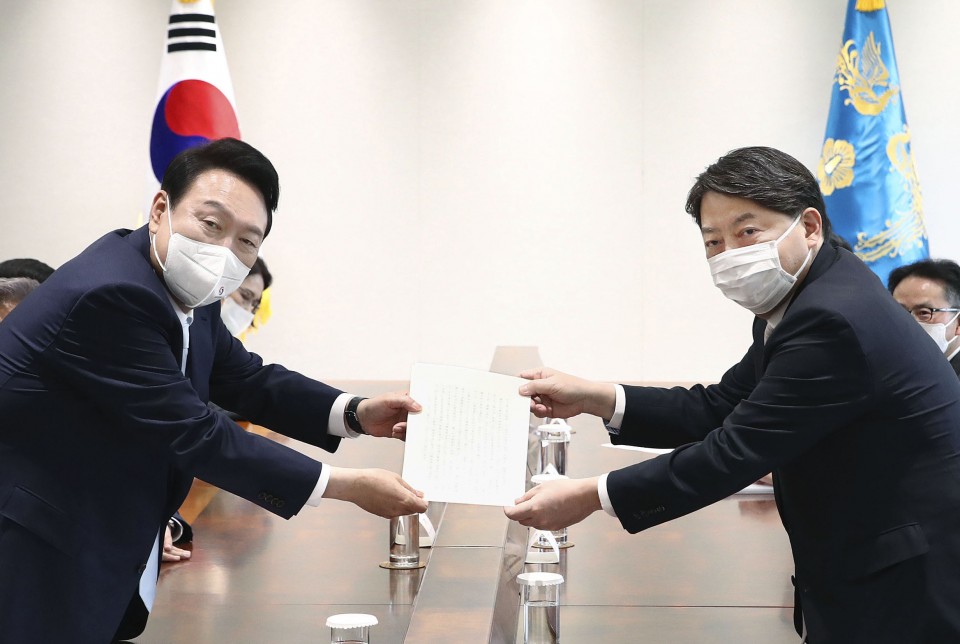 Hayashi told reporters he also told Yoon the two countries must resolve "matters of concern," such as the wartime labor issue, to restore bilateral ties that plunged to their lowest point in decades during the previous administration of Moon Jae In.

Hayashi attended Yoon's inauguration ceremony as Kishida's special envoy and delivered a letter from the prime minister to the new leader during their meeting, which lasted about 30 minutes.

In the letter, shown to the press when Hayashi and Yoon posed for a photo, Kishida wrote that he "feels very reassured" that the new president is keen to improve Seoul's relations with Tokyo.

In a rare departure from diplomatic protocols, the contents of the personal letter were disclosed when it was handed to Yoon, perhaps due to prearranged coordination by officials to create a conciliatory mood.

"Japan and South Korea are important neighboring nations for each other," the letter also said, with Kishida expressing expectations for Yoon's "leadership" to help them "remove obstacles."

Due to issues mainly related to Japan's 1910-1945 colonial rule of the Korean Peninsula, as well as the impact of the coronavirus pandemic, Japanese and South Korean top leaders have not held an in-person, sit-down meeting since December 2019.

Hayashi arrived in South Korea on Monday as the first Japanese foreign minister to visit the neighboring country since June 2018.

Before winning the country's presidential election in March, Yoon said he would visit Japan second after the United States if he became the country's leader.

Yoon had also said he would resume Tokyo's so-called shuttle diplomacy with leaders making reciprocal visits -- a practice stalled since 2011.

Still, whether Hayashi's visit will pave the way for a summit meeting between Kishida and Yoon in the near future remains unclear, as Japan has maintained that the ball is in South Korea's court, and Seoul should take action to repair their frayed ties.

Tokyo has kept its stance that wartime issues have been resolved and that South Korea should follow through on agreements, including a 1965 pact signed with the treaty normalizing their diplomatic ties and a 2015 deal to settle the issue of "comfort women" procured for Japan's wartime military brothels.

Hayashi said he and Yoon agreed that the two countries' trilateral security cooperation with the United States is essential for regional stability and their response to the North Korean nuclear and missile threats.

Yoon, the main conservative opposition candidate, won the presidential election by a razor-thin margin. During campaigning, he called for a "future-oriented" approach to relations with Japan.

In addition to wartime issues, the two countries are at odds over islets in the Sea of Japan controlled by Seoul and claimed by Tokyo, known as Takeshima in Japan and Dokdo in South Korea.

On Monday, Hayashi met with his incoming South Korean counterpart Park Jin and agreed the two countries will discuss issues of concern "in a timely manner so that they are resolved as early as possible," according to Japan's Foreign Ministry.

During the meeting with Yoon, Hayashi said he hopes to meet Park again sometime soon in Japan to continue their discussions.