Grossi inspected tanks storing treated water and an advanced liquid processing system that removes most radioactive materials from contaminated water except for tritium, during his first visit to the Fukushima Daiichi nuclear power plant, damaged by the 2011 earthquake and tsunami, since February 2020.

Speaking to reporters during the visit, the head of the U.N. nuclear watchdog stressed that the only way to earn the confidence and trust of the general public further is by "being absolutely open in everything we do" and not hiding anything.

"Whatever being done here is in compliance with the safety standards that we have approved for activities, similar activities (conducted) all over the world," he said. 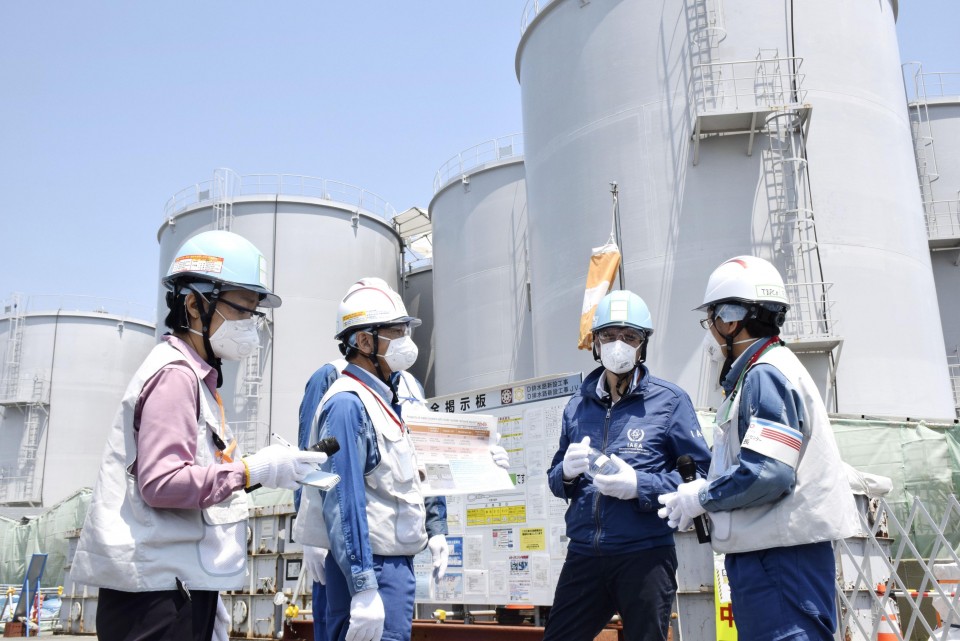 The planned discharge of treated water is expected to begin around next spring, while China and South Korea, as well as fishing communities in Japan, which fear reputational damage, have expressed concerns and opposition to the plan.

South Korea will now take part in the IAEA-led monitoring of the planned discharge, according to an official of the country's Foreign Ministry.

"I am very impressed with the degree of progress," Grossi said of the decommissioning activities and preparations for the discharge at the site, adding it was way beyond what he was expecting.

For Tokyo Electric Power Company Holdings Inc., the plant operator, to begin construction of the discharge facilities, it is necessary to gain consent from the municipalities hosting the crippled nuclear power plant.

Earlier this week, the mayors and assembly leaders of municipalities that host TEPCO's Fukushima Daiichi and nearby Daini nuclear power plants asked Economy, Trade and Industry Minister Koichi Hagiuda for transparent and objective information disclosure in and outside the country so that residents and others can better understand the plan.

According to the TEPCO plan, the water treated through the ALPS system will be diluted with seawater to one-40th of the concentration permitted under Japanese safety standards and released 1 kilometer off the Daiichi plant via an underwater pipeline.

Water that has become contaminated after being pumped in to cool melted reactor fuel has been accumulating at the complex, also mixing with rainwater and groundwater at the site.

About 1.29 million tons of treated water is currently stored on the premises of the plant, and it is edging closer to the capacity of 1.37 million tons, according to the industry ministry.

After his visit to Fukushima Prefecture, northeastern Japan, Grossi held talks with Foreign Minister Yoshimasa Hayashi in Tokyo, with the two agreeing to cooperate on securing safety for nuclear power plants in Ukraine, which was invaded by Russia in late February.

Hayashi pledged 2 million euros in Japanese aid to that effort through the IAEA. The money would be used, among other things, to provide necessary equipment and dispatch IAEA experts.